Clive Neal perched his 2-year-old grandson on his shoulders. The boy pointed toward the night sky. 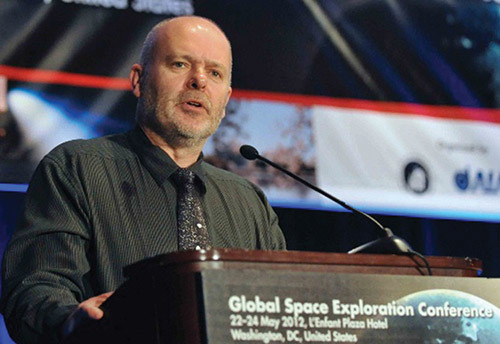 “When you’re older,” Neal said, “maybe you’ll go there and get your granddad some rocks.”

Despite never having visited himself, and reluctantly resigned to the fact that he never will, Neal knows the moon better than most earthlings. “That’s my field area,” the Notre Dame engineering professor tells his grandkids when the sight of it captures their attention.

He’s a planetary geologist, studying samples retrieved from the lunar surface to understand how the Earth’s only natural satellite originated and evolved — and how its resources might help launch the future of space exploration. He’s an advocate for reviving human missions to the moon that have been dormant since the cancellation of the Apollo program in 1975.

Political support in the United States is tepid. There’s a “been there, done that” attitude, a sentiment Neal counters with slides illustrating just how little has been done there.

When Apollo 11 — “one giant leap for mankind” — traversed the surface in 1969, the astronauts covered an area only a fraction of the size of the National Mall in Washington. Three years later, a rover allowed the Apollo 17 crew to extend its exploration to the equivalent of a Paris sightseeing tour. There’s much more ground to cover and knowledge to unearth (unmoon?).

Beyond U.S. borders, there is more support for the prospect of going back to the moon. At an international conference last year, scientists expressed enthusiasm in European Space Agency director Johann-Dietrich Woerner’s call to create international “moon villages.”

As envisioned, astronauts and robotic systems at the villages would conduct research on the moon, which also could provide a base for further solar system exploration, including sending humans to Mars.

The first step is to establish that resources available on the moon are sufficient to fuel those ambitions. At the moment, that’s the essential question.

“How do we make human space exploration sustainable?” Neal asks. “You do it by living off the land.”

A program like Apollo, requiring a payload of everything the astronauts needed to survive for the duration of their journey in space, could not be reproduced today. Too expensive. Each pound of cargo, NASA estimates, costs $10,000 just to put into low-Earth orbit.

Most of the fuel necessary for any mission is burned just leaving the gravitational pull of Earth’s atmosphere. If the resources on the moon support human needs, that would decrease the weight on board and make the journey fuel-efficient enough to afford.

“Your launch costs go down tremendously,” Neal says, “because the mass you have to get off this planet is much reduced.”

Once on the moon, the astronauts would need oxygen, water and fuel. Research on samples from the moon dating back to the Apollo missions, which Neal has been studying since 1986, shows how oxygen and water can be produced from lunar material. Apply heat in a vacuum to dust, soil and broken rock — the regolith covering the moon’s hard surface — and, like sweat on a glass, water drips from it.

“Sort of neat, because it’s completely devoid of water. That reaction happens because the solar wind keeps putting little hydrogen atoms in there,” Neal says. “There’s a lot of oxygen bound up in the rock. That then facilitates the reaction, so we can generate it. Basically, we can generate water anywhere on the moon.”

Solar energy, virtually unlimited at the moon’s poles, can be harnessed to separate water into its component parts. That process of electrolysis creates oxygen to breathe and hydrogen to heat the regolith and produce more water.

Scientists already know that’s possible. The issue is whether adequate reserves of the known resources exist to support human life and scientific exploration at lunar villages and beyond.

Neal, a member and past chair of the Lunar Exploration Analysis Group, has been arguing for moon-prospecting missions for years to find out. Private investment could help make them a reality.

Moon Express, for example, plans to launch from Cape Canaveral next year, ferrying robotic instruments “for ongoing exploration and commercial development,” the company says on its website. On a panel at a Federal Aviation Administration space commercialization conference earlier this year, Neal expressed excitement about how such missions could help advance science, comparing it to the commercial satellite business.

“NASA can pay for a ride, basically,” he says. “They get [the company] to assume most of the risk, and they’re now buying a service rather than providing everything. It’s a paradigm shift in terms of how space exploration is done.”

And maybe, he goes on, a private-sector moon landing could be an “Apollo moment” for a new generation, a contemporary version of his experience as a boy in England rustled from bed to witness history in 1969. Investment fueling inspiration and vice versa in the creation of a new extraterrestrial economy with jobs “that are very Buck Rogers in scope,” Neal says. “It should capture the imagination.”

Like a 2-year-old’s view of the moon from granddad’s shoulders.