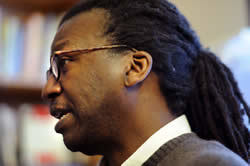 Cornelius Eady is a poet. One of his eight books, The Gathering of My Name, was nominated for a Pulitzer Prize in 1991. Another, Brutal Imagination, was a finalist for the National Book Award in Poetry in 2001. He and jazz composer Diedre Murray have collaborated on several works of musical theater, including Running Man, a finalist for the Pulitzer Prize in Drama in 1999. Another play, Brutal Imagination, won the prestigious Oppenheimer Award in 2002.

My introduction to the 54-year-old native of Rochester, New York, came from a thin volume of 21 poems about his father, and his father’s dying and death. It’s called You Don’t Miss Your Water.

One afternoon I pulled the book from a bookstore shelf, leafed through it, read this poem and that. Then I sat and read it from beginning to end. When I got to the end, I sat for awhile and thought about what I’d read. Then I read several favorites once more. The poems take you to the raw, honest place where a son tries to make sense of a tough and distant father. The poet Gwendolyn Brooks said of it, “Who wants wisdom will find it here.”

A few days later I met Eady, who runs Notre Dame’s creative writing program, in his small office in Decio Hall. It was a cold, wet, gray, abysmal day, and we talked in the shadows of his unlit cubicle. We would talk long past the hour I’d asked for—about poetry and writing, and writing poems, and what it means to be a poet. But I started with his dad.

“We didn’t really hate each other, we weren’t always at loggerheads,” he says. “It was more that he was really not interested in hearing I’d decided to become a writer. That’s where the tension is, right? It was, ‘I don’t understand you, you’re crazy.’ And: ’You’re old, get out of my way and let me do what I need to do.’”

His father, Eady explains, “was not artistically oriented. He had a very particular definition of work. You get up in the morning and you punch a clock.” In the title poem of the book he describes his father as a man “who distrusted anything he couldn’t get his hands on.”

“So doing what I was doing—which he allowed me to do, allowed me the possibility, the option to live more in the imagination, right?—but from his point of view it was, ‘What do you do? How do you do this?’” Eady says. “Even the idea of how you make money as a writer, as an artist, was a mystery to him. Also, commingled with this was a concern, because he saw this as a really bad career choice—which it is, right?—if you want to make money. So that was there. It was like, ’What’s going to happen to you?’ Which is a kind of affection, right?”

A worthy job
Tensions started to ease, says Eady, when he married and had landed some teaching jobs. But the important step toward understanding came in 1980 when, at age 26, he published his first book, Kartune, and had a reading at a coffeehouse in his hometown of Rochester. His father drove him there, then stayed for the reading. “He actually really enjoyed the poetry reading,” Eady recalls, “because he saw some worth attached to what I was doing.”

In 1985, Eady’s Victims of the Latest Dance Craze was selected by The Academy of American Poets for the Lamont Prize, given to the year’s best “second book” by a poet. It meant more readings. "My dad was actually trying to figure things out, trying to figure out the mechanics of a reading. I remember him saying, ‘You mean they read your book, and they invite you to come read it?’ And I’d say, ‘Yeah, that’s right, and they pay me for it, and they pay me money for my transportation, and my housing, and give me an honorarium on top of that. And people come and they hear me read and then they buy some books if they haven’t already.’

“And I could see he was trying, God bless him, he was really trying to figure this out. And he was like, ‘And this is your business, right? This is your work?’”

When Eady was young, he would go to New York City and read his poems. He read them in coffeehouses and bars, trying to find his niche, his voice, maybe an audience for his work. He jokes now about reading “quiet, reflective poems” in noisy venues. “The poems went over like lead balloons,” he says today. So he started writing “loud poems.” He laughs—something he does easily. “Really,” he says. “I started writing loud poems.”

One night, late, he was the final car in a long train of wanna-be poets reading their stuff. As he began to read, he noticed a couple getting up to leave . . . then hearing, stopping, deciding to stay. When Eady had finished, the pair introduced themselves, said they were starting a new publishing venture. They would publish Eady’s first book. His eighth, his latest, Hardheaded Weather, New and Selected Poems, is dedicated, says the inscription, to “Patricia and Peter Fillingham who walked back into the room.”

Eady, now securely established within the American poetry scene, talks about “public and private personas” and the complementary needs of each. “I’m not writing for my own gratification,” he explains. “I’m always understanding there is an audience out there I’m trying to reach, that will attach to, connect with what I’m doing.”

Just what is he trying to reach that audience with? “Well, it’s changed over the years,” he says, lifting his coffee to his lips but delivering further thoughts without taking a sip. “I like to think,” he begins, “my poetry represents a voice that sometimes doesn’t get heard, or doesn’t get explored as deeply as it could be.” He pauses, lifts the cup, goes on: "Here we are in this bubble that is the end of the 20th century and the beginning of the 21st century, and I’m writing about what it was like to be me, an African-American male in this culture, at this time.

“Another thing I’m doing is telling my parents’ story to a certain extent. I’m actually preserving their world, and also in some ways making the point that those lives are literary, too.”

He talks about the universal elements of that family story and about offering his voice to the accumulated witness of a long line of poets, from Emily Dickinson to Langston Hughes, Galway Kinnell to Pablo Neruda.

Kinnell is a poet Eady has long admired, and he bashfully recounts the time Kinnell showed him his poem “You Don’t Miss Your Water” taped to his desk in his New York apartment. This takes us back to the beginning of our conversation, so I mention, too, the poem about his father’s car. And Eady talks about the full blow of that moment when—after his father has died and he opens the car some months later—he is somehow again in the presence of his father. “That was the most powerful trigger . . . ‘cause he’s there, you know. The scent, the smell of his sweat and cigarettes. That’s who he was. In that car.” And I tell him I know that sensation, maybe not from a car but from the sock drawer, my father’s desk drawer.

And he goes, “Yeah, right, right. So people read that poem, and they think, ’I’ve been here. Well, maybe it’s not exactly my dad, but I’ve been here.’ And so that’s what I mean. When you do it right, it works that way. It’s what you shoot for, that kind of reaction. Someone’s gonna go, ‘Wow!’”

Kerry Temple is editor of this magazine. Email him at temple.1@nd.edu.