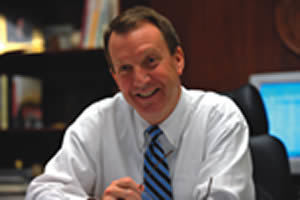 You would think that the team which had just raised the improbable sum of $1.5 billion to help underwrite Notre Dame’s future would mark the occasion with yawps and cheers and high-fives and some well-earned time off. To accomplish the feat two years ahead of schedule and under adverse economic conditions makes a celebration all the more deserved. But Notre Dame’s development operation hardly paused in self-congratulation when it eclipsed its daunting goal this past July. There’s still work to be done.

Nobody feels that more acutely than Dan Reagan, a 1976 Notre Dame graduate and the associate vice president for university relations who has management responsibility for the Spirit of Notre Dame Campaign now approaching $1.6 billion. He also managed the Generations Campaign that raised $1 billion for the University during the 1990s and parts of the Strategic Moment Campaign that generated $463 million in the ’80s.

So Reagan is familiar with the challenge of supplying the resources to fund Notre Dame’s ambitions. He also knows that, even though the campaign’s overall target may have been met, specific priorities remain underfunded. When he talks about these, despite citing dollar amounts, it’s evident that what’s important to him is meeting needs.

We are sitting in a relatively quiet back room in LaFortune, talking about the success of the campaign, those remaining needs, why people give to Notre Dame and why they don’t, and his concerns about fundraising in today’s philanthropic climate.

“One thing that rides in the minds of many of our people,” he says, “is ‘Why continue to raise more money when the goal you set out to achieve has already been achieved?’ Well, there are some real good reasons. One is that we’re trying to hit as many of the subtargets as possible, and some things haven’t been achieved yet — things we need to achieve to keep the momentum of the institution going.”

First among these is financial aid. Financial assistance for undergraduate students was the campaign’s No. 1 priority when it was launched in 2004, and fundraising is still about $55 million short of that $250 million goal. That shortfall is of even greater concern because today’s economy has heightened the need.

“What we find now,” Reagan explains, “is not only is that $250 million scholarship money absolutely imperative, but it’s gotten even more intense because of the economics of our Notre Dame families. Where 13 months ago things may have looked okay for a family where both parents were working, now one of those parents has lost a job or the family income is not what it was. . . .

“So that whole priority right there, in and of itself, is reason to carry this campaign forward. And given the state of the economy, it will be tough to achieve.”

Additional targets for financial aid extend to graduate fellowships and to law and MBA students, for tuition as well as stipends and benefits. Resources to attract stronger grad students improve the enterprise across the board — elevating graduate study, hiking the quality of advanced scholarship and research, and enhancing undergraduate studies because of the graduate students’ interactions with undergrads.

Also, Reagan points out, “If we can improve the quality of the students, that only furthers the desire of great faculty to be at Notre Dame — which leads me into a third area we’re working on very aggressively but which has lagged behind other priorities so far in this campaign, and that is the need for endowed professorships.”

Success there, Reagan admits, has been “moderate,” partly because it is “expensive philanthropy.” Endowed chairs range from $1.5 million to $5 million each, depending on whether they are designed for junior or senior faculty — “attracting and keeping newer talent” or “recruiting existing ‘star’ faculty who could make a huge impact here at Notre Dame.” He adds, “We really have our work cut out for us trying to raise an additional 50 professorships by the conclusion of this campaign in June 2011.”

Despite the boom in campus construction, physical facilities also need additional funding. For example, a new building for the executive education program in the Mendoza College of Business is $8 million short of its goal, another $25 million is needed for renovations to the Hesburgh Library, and $45 million is sought for a new free-standing hockey arena. Also on the drawing board are two residence halls, a new student activity center, and a building for the social sciences in the College of Arts and Letters. “These will all remain as priorities whether the campaign funds them or not,” says Reagan.

Then, too, the list given fundraisers at the campaign’s outset has gotten longer. “That’s both the curse and the blessing of a 7-year campaign,” Reagan says. “It gives you time to work on all your major priorities, but it is also so long a period that new priorities emerge — as it should because a university should always be looking forward.

“One area where we’ll absolutely see the most growth and where we’ll see the most need going forward is for the academy,” he says. “Notre Dame’s further involvement in research, in its ability to positively affect graduate education but also undergraduate education, will take us into areas where Notre Dame hasn’t gone before, especially in the sciences and in engineering.” For example, expanding initiatives in cancer research are creating vital needs in the College of Science from facilities to faculty, and from graduate studies to undergraduate education and research.

“What has emerged over the duration of the campaign,” Reagan says, “is the need to have greater charitable support of the academic mission at the University. We didn’t achieve enough on it, but as we go beyond this campaign you’ll see the academic mission will become more the centerpiece of Notre Dame fundraising.”

Does this, I ask, affect fundraising strategies? Are potential donors, traditionally wedded to Notre Dame because of emotional or spiritual ties, as likely to give to areas with less personal appeal? Reagan admits that academic advancement may be a tougher sell until “the education process” helps people “truly understand how it all fits in and how their support can enhance Notre Dame’s mission.”

“But with that sophistication comes the concern that we could lose the warmth and the emotion that has always been a major part of previous campaigns. So it is a delicate balance because I do think people give to Notre Dame because of the emotion they have for the place, for the loyalty they have for Notre Dame. And I think deep down inside those who support us — be it large or small — want to see Notre Dame succeed, and that comes in a variety of ways, one of which is through the academic mission and that’s something they’re very proud of.”

Even though the Spirit campaign has succeeded, Reagan is concerned about alumni giving and the support of others toward Notre Dame. Three-fourths of Notre Dame’s alums contributed to the previous campaign; this time two-thirds have contributed thus far. No pledges have been pulled because of economic factors, but donors have slowed the pace of paying on pledges. “We’re sensitive to that, totally understand that,” says Reagan, “and we’re absolutely working with families on those situations.” Still, alumni giving that has historically been among the nation’s best, comfortably above 50 percent annually, has dropped in recent years, falling below 45 percent.

When asked why people don’t give to Notre Dame, Reagan offers several reasons. “Some people don’t give because really and truly they just don’t have the wherewithal to give,” he says. “Others may not give because they get concerned about the things we were just talking about, the greater sophistication of the institution, that maybe it doesn’t appear to them to be the same place it was when they were here. Or there may have been an incident, an admission rejection, something like that, that certainly would make them feel a little less toward charitable support of the place.

“Another reason is that some of our alumni, younger ones in particular, look at the University and feel that it is already very strong financially. . . . A good number of our alumni, our Notre Dame constituents come to campus and see the new construction and the tremendous growth and they feel that Notre Dame is in pretty good shape and think, ‘My $100 or $200 gift really isn’t going to make a difference.’ But collectively it really does.”

To help in this regard, the development operation is now allowing donors to direct even small gifts toward areas — such as financial aid, global service, academic and student life, or the Catholic mission — that match their interests. “People have supported Notre Dame throughout its history because they love the place and they want to see it succeed, and it brings a certain amount of joy to them when they do it. Those of us who do the fundraising for the University have to be very mindful that we want people to support Notre Dame because they want to, because it brings a certain satisfaction to them, that they know — whether they give $100 or $1 million — that they are a part of making this an even better place.”