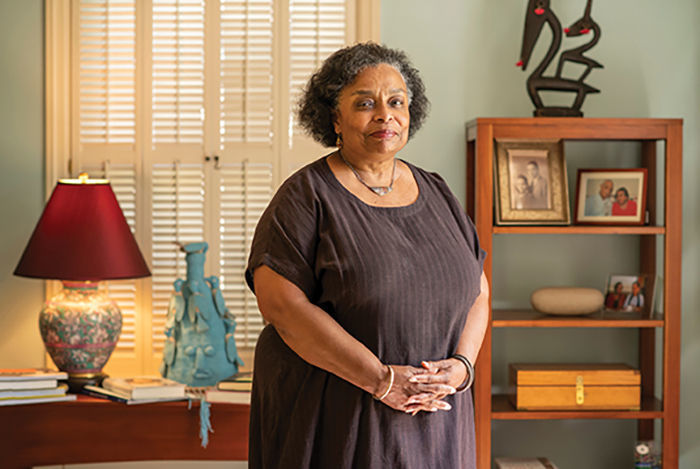 Dianne Pinderhughes has been observing protests and marches for racial and social justice since her childhood in segregated Washington, D.C., where residents of the majority Black city didn’t have the right to vote in presidential elections until after passage of the Twenty-Third Amendment to the United States Constitution in 1961.

In 2020, after the death of George Floyd at the hands of Minneapolis police and the growth of the Black Lives Matter movement, things seem different.

“By race, it’s quite different from the pattern that we have seen in past decades of unrest. A significant number of whites have been in the streets,” says Pinderhughes, a professor of political science and chair of the Department of Africana Studies.

White support for the civil rights movement in the 1950s and ’60s was mostly limited to small groups of religious or political leaders and college students who went to the South to join in demonstrations for racial justice. “This is a much broader range of the population, and even multigenerational protest groups [are] going out and bringing their children to protest,” the professor says.

Our virtual meeting via Zoom comes a few days after the Democratic National Convention and Joe Biden’s selection of U.S. Senator Kamala Harris of California as his running mate, forming the first major-party presidential ticket to include an African American woman.

A lifelong Catholic, Pinderhughes grew up walking daily to her family’s all-Black parish, attending its grade school and later graduating from a Catholic girls’ high school. Her parents emphasized the importance of education. Both were high school graduates, and her father attended a couple of years of college, not usual for African Americans in that era.

Pinderhughes was born in 1947. “Washington was still just at the cusp of beginning to confront racial discrimination and segregation,” she says, describing the nation’s capital in those days as a sleepy Southern town. “A very conservative, racially segregated town.”

She grew up knowing that Black Americans weren’t welcome to participate in political life. “At a very young age, I was very alert to issues of politics. I was thinking about those things and observing them, reading the daily papers and noticing the racial differences in political views,” she says.

Pinderhughes attended Albertus Magnus College, a Catholic liberal arts college in New Haven, Connecticut, and later earned her master’s and doctoral degrees at the University of Chicago. She joined Notre Dame in 2006 after more than two decades of teaching and administrative work at the University of Illinois and, earlier, nine years on the faculty at Dartmouth College.

At Notre Dame, Pinderhughes has witnessed an increasing number of women in University administration and other changes, too. She mentions football players who led a campus celebration of Juneteenth this summer, an event led in part by Daelin Hayes ’20, one of her former students. “I don’t think it would have happened in the past. I think in the past they were expected never to make public political statements,” she says of student-athletes.

We discuss the demonstrations that continue in cities across the country and calls to “defund the police.”

“It makes sense to me to think about taking some of the funding used to impose extreme control on the population of a city and move some of that into education, health care, social welfare and social welfare policy. Spend money on that rather than just having police control,” she says.

With recent events, Pinderhughes is hopeful about the possibility of change for the better across the nation, especially now that more white Americans “are willing to simply stand and protest.” That could mean, she says, reforms to the ways police handle arrests and routine encounters with the public, as well as the election to public office of more people of color at all levels of government, toward a better representation of America’s diversity.

“There’s at least some foundation for change. Now it won’t be the change that Black Lives Matter would like to see put in place,” she says, noting that BLM activists haven’t yet incorporated themselves into the democratic process, and that local, state and federal officeholders frame policy. “But it will be change that we wouldn’t necessarily have thought would be possible in the past.”