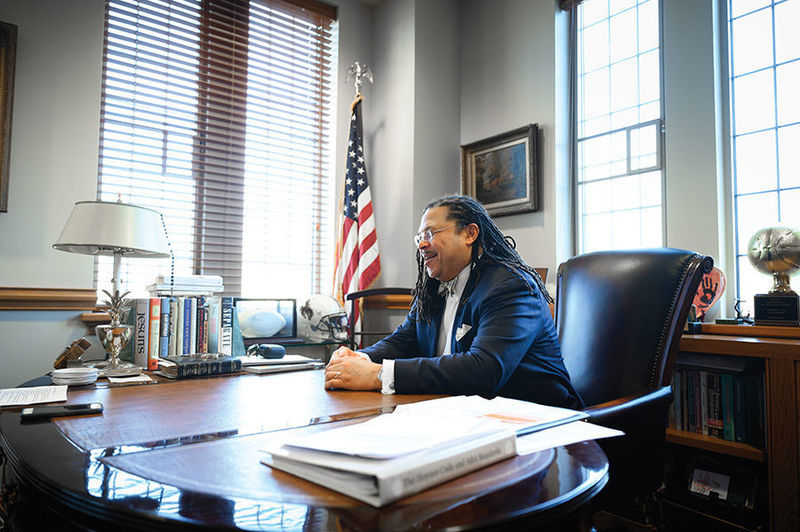 Cole: ‘I want people all around the world to look to Notre Dame for help when their religious liberty is being encroached upon or they’re being oppressed because of their faith — or lack of faith.’ Photos by Matt Cashore ’94

Two weeks later, he received more hostile letters after U.S. Attorney General William Barr spoke at the school on the topic of religious freedom. In the speech, Barr decried the ascendancy of secularism and declared that Judeo-Christian standards are “the ultimate utilitarian rules for human conduct.”

“I actually like getting hate mail because it makes me feel as though we are having an impact in the world,” says Cole, the Joseph A. Matson Dean and Professor of Law. Cole began his job last summer as the 11th dean in the law school’s history. He previously worked and taught for 22 years at Stanford Law School.

Some people think a university law school should support their particular political view of the world, the dean says. “That would do a disservice to our students. Our students are here to make a difference in the world, which means that they have to hear ideas from all angles, from everyone,” he says. Such opportunities do not constitute institutional endorsement of those views, he adds.

Some angry correspondence comes from students. “You have every right to be offended by what someone says. You do not have a right to not be offended,” Cole told them during his State of the Law School address in February.

“Lawyers have to be trained to deal with all ideas, all thoughts that are current in the world. You can’t cloister them or protect them from ideas or words or ugly thoughts,” Cole says. “A law student who is afraid of ideas or words is like a medical student who’s afraid of the sight of blood.”

The dean speaks passionately of his commitment to freedom of speech and expression — and of the law school’s role in defending religious freedom.

With his trademark bow tie, Cole already is a familiar sight on campus. In his left breast pocket is a white handkerchief that belonged to his late father, Gilbert Cole, who died two decades ago. The handkerchief was folded by his father, and he’s never unfolded it.

On a wall in his office hangs a framed painting of the elder Cole. “I’ve always kept that portrait of him in my office because I always felt like he was watching to make sure I was working,” the dean says.

Cole grew up in Terrace Village, a public housing development in Pittsburgh’s Hill District, the son of immigrants Gilbert and Christina Cole. His mother was a pharmacist and a white native of the Netherlands, and his father was a black West African, a native of Sierra Leone who had moved to Liberia for better opportunities. The two met in Liberia, married and moved to the United States, where they raised their five children.

His father got a job in a steel mill, attending the University of Pittsburgh in the evenings until he earned an engineering degree. After graduating from college, he continued to work for the mill, but he set aside his overalls and donned a jacket and tie each day for his job as an engineer.

“That’s why, even at Stanford — where professors don’t wear a jacket and tie — I always wore one every day, because of my dad. My dad valued the fact that not everybody gets to wear a suit and tie in their profession. And so I don’t take it lightly,” Cole says.

In childhood, Cole and his older brother, Michael, had two jobs: They delivered newspapers each morning to contribute to the family’s income, and they served as altar boys at their neighborhood parish, St. Agnes Church.

On Sunday mornings in autumn, the boys would get up extra early, deliver their newspapers as quickly as possible and run to St. Agnes to serve at the first Mass of the day. Then they would rush home to watch the rebroadcast of the previous day’s Notre Dame football game. (There were no live national broadcasts of the games in those days.)

“We just lived for those broadcasts every Sunday,” Cole says. “And when we were little boys, my brother and I made a pact that when we were old enough to go to college, we were going to go to Notre Dame.”

Michael Cole ’77, the elder by five years, lived out that dream and today is an engineer in San Diego.

“When I applied five years later, I didn’t get in, and I was devastated,” Marcus Cole says. Instead he attended his “fallback” school, Cornell University. And he never regretted it, because that’s where he met his future wife. He and Angie have been married for 31 years and have two sons.

Claude attends the University of Wyoming and is a defensive tackle on the school’s football team. Younger son Constantijn is a high school senior and a basketball player at Bellarmine College Preparatory in San Jose, California.

Cole learned basketball from scratch when Constantijn was a grade-schooler playing on a community basketball team that needed a coach. The boy was a little nervous about it. “He sort of supervised my learning of basketball,” Cole says. “Every video that I watched, he watched alongside me. Every drill that I tried to learn from the books he learned and demonstrated for me.”

In Cole’s office, a Bible sits within easy reach on the right side of the desk. Hundreds of books on law and countless other topics line the many office shelves. Nearby are basketball trophies from Constantijn’s teams, a miniature football helmet representing Claude’s Wyoming Cowboys and a football signed by Alan Page ’67, the retired Minnesota Supreme Court justice and legendary former Notre Dame and Minnesota Vikings defensive lineman.

At Cornell, Cole majored in applied economics with a minor in engineering. After college, he was accepted to Notre Dame Law School, but couldn’t get enough financial aid to attend. He was offered a full scholarship at Northwestern University, where he earned his law degree.

“That’s the reason why financial aid is so important to me, because this is the place I really wanted to be,” Cole says. “It wasn’t a practical choice for me given the lack of financial aid.” Today more than 85 percent of the law school’s 640 students receive some level of grants or scholarships. Roughly 32 percent receive half to full tuition.

Cole clerked for a federal appeals court judge and worked as an associate with the law firm of Mayer Brown in Chicago before joining the law faculty at Stanford. He’s served as a fellow at the University of Amsterdam Center for Law and Economics, and as a visiting professor at schools in Austria, Germany, Korea and China.

In 2017 Cole attended a conference in Washington, D.C., organized by Notre Dame Law School’s Program on Church, State & Society. “There was something different about the way the Notre Dame people presented,” he recalls. “They had a fire in them about what they were doing. It didn’t matter what area of law they were talking about, you could just tell they were on fire.”

A few weeks later, Cole was told he had been nominated as a candidate to become the next dean of Notre Dame Law School. “I always tell people that I don’t believe in coincidences. I believe that everything has the hand of the Holy Spirit in it,” he says.

Cole loved working at Stanford and living in California. There was only one place that could lure him away. When he was offered the Notre Dame deanship, he immediately said yes. Without casting any aspersions on Stanford, he says: “At Notre Dame you don’t have to hide who you are. Your faith can be on full display. And to me, faith is a public expression of inner beliefs.”

Cole’s top academic priority is a Religious Liberty Initiative, which he predicts will enable the law school to become a major force for the protection of freedom of conscience. It will include a clinic to lead the fight against religious persecution.

“I want people all around the world to look to Notre Dame for help when their religious liberty is being encroached upon or they’re being oppressed because of their faith — or lack of faith,” he says. He mentions more than 1 million Uighurs and other Muslims imprisoned in Chinese internment camps for their beliefs and notes that atheism remains punishable by death in 13 countries.

He sees disrespect for faith growing in the U.S., referencing churches in California that are trying to feed the homeless but are told they are providing social services and therefore need licenses. And he mentions Catholic hospitals that have told physicians they can’t provide assisted suicides in their facilities but are facing new state laws legalizing the procedures, seemingly forcing hospital operators to violate their religious convictions.

The London Law Program, now in its 52nd year, will continue, but the United Kingdom’s decision to withdraw from the European Union has turned Cole’s eyes toward the Republic of Ireland, the last English-speaking common-law country in the EU and home to Notre Dame’s Dublin Global Gateway. Starting this summer, that program will enroll five Notre Dame law students who will work at Irish firms.

Meanwhile, a faculty and student exchange program is in the works with Tel Aviv University in Israel, and Cole is seeking to establish similar agreements in several other countries.

He interacts easily with students. In the fall, he’ll teach a contracts course to first-years. “I love teaching first-year students and introducing them to life in the law,” he says.

Nine months into his new job and his new home, Cole is constantly evaluating the law school’s role and how to better fulfill its mission. He makes no little plans. “We have an opportunity to have an impact on decision-making in this country and around the world,” he says, “and to be moral and ethical leaders.”