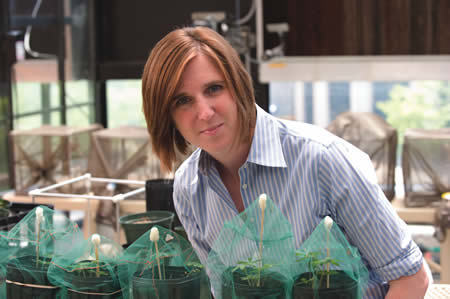 My gaze wanders past Jessica Hellmann and out the window of Grace Hall’s Café de Grasta as she and I chat. A flash of orange, a robin that has just fluttered past, catches my eye. It’s a beautiful day in early March, a week before St. Patrick’s Day, a picture-perfect blue sky, temperatures in the low 60s, trees thick with buds on the Notre Dame campus. This is a day as all days should be.

It is nothing like the typical March South Bend day I have grown to expect. You know the ones: all frigid rain, wind-swept bluster and heartache. Now that is South Bend in late winter. So has paradise come too soon this year? And if this is March, what is July going to be like, I wonder. Then my mind snaps back to the conversation at hand.

“So, Jessica, are there aspects of the climate change debate that frustrate you?”

“Well, yes and no,” says the Notre Dame associate professor of biological sciences, who is on sabbatical writing a book about what should, or could, be done to help species transition to a warmer world.

First of all, Hellmann says she thinks it is unfortunate that climate change has become politicized. Regardless of political orientation, we all inhabit the same planet. Further, she thinks the actual debate among climate scientists is often misunderstood by the general public and misrepresented in the popular press.

All scientists are trained to be skeptics, the biologist who analyzes butterfly migration to study climate, points out. However, skepticism — namely wanting more proof before reaching a conclusion — is not the same as saying no problem exists. Such a head-in-the-sand attitude is not scientific skepticism but denial, she contends.

Climate scientists argue all the time, Hellmann points out, but it’s not about what the public thinks. “There are huge fights over what kinds of clouds will form in a warmer world and what effect they might have. There are huge fights over hurricanes, and the severity of weather patterns.” But, she adds, there are not many scientists who would say greenhouse gases do not increase the average global temperature.

There is no question, Hellmann says, that carbon dioxide levels in the atmosphere have risen precipitously in the past 100 years, and that this surge continues at ever faster rates.

To emphasize the point, she draws a graph of undulating squiggles on a slip of paper. “This, she says, “is atmospheric CO2 plotted through time. You can see the levels go up-down, up-down, up-down, depending on whether the Earth is in an ice age. So here we are now,” she gestures to a straight-up line shooting off the page. CO2 quite literally is blasting into the stratosphere, and there is no sign of re-entry.

“We already have 40 percent more carbon dioxide in the atmosphere than any time in the last 650,000 years. And it’s going up and up, with larger increases in emissions each year. Most people have no idea how drastically different this increase is. It is astronomical. If we don’t slow and eventually stop emissions, climate scientists tell us that within 100 years the climate could become as different from today as today is from the end of the last ice age.”

The greenhouse gas data are so compelling that Hellmann says she doesn’t believe the “Is climate change real?” debate will continue much longer. “Pretty soon we won’t be arguing whether it’s happening. But we’ll likely be arguing who is responsible for how much and what is the right path forward. I think it’s much more reasonable to have substantive disagreements about what to do about climate change, rather than arguing about if it exists or not.”

As far as her upcoming book is concerned, the Notre Dame biologist says she takes climate change as a given. “It’s not a book about what you should do to eliminate climate change. It’s what you do in response.”

If the projections from the Intergovernmental Panel on Climate Change are correct, especially the “business as usual” scenarios in which climate change is largely ignored and denied, she says the human race and every other creature on the planet is likely in for a wild ride. “Those scenarios are really scary. I mean really different than we are used to today. Imagine species that we think of in the southeast living in Indiana, or heat waves every summer in the Midwest with temperatures well over 100 degrees [Fahrenheit].”

With that as a backdrop, the ecologist argues it is imperative to prepare for that future. For her book, she’s examining a variety of proposals scientists have advanced to help species cope with a warmer world. Those strategies include managed relocation, in which species might be transported to new habitats. Another scheme is setting up ecological “corridors” that would make it easier for threatened species to move on their own to more favorable places. Then there’s the “Noah’s Ark” approach in which representative specimens might be put in zoos, or fertilized eggs are frozen, with the species eventually to be re-introduced to the wild.

“A lot of what we’re talking about is manipulating nature. Some of the more drastic ideas involve putting species in new places. Implicit in all of this is that the human race has some culpability for where we’ve taken the planet. Namely, we’ve altered the fundamental underpinnings of what makes things live where and how well they do there. We are a major force of nature in our own right.

“So the question is: Do we just stand by and let things run their course? Or are there some values we might want to preserve?”

Hellmann doesn’t pretend to have all the answers. “I’m not telling people what to do, or what’s right or wrong. Essentially my argument is that all these things are in play. And it’s not just all about what the scientists say. But we can and should lay these issues out, and when rational people come together and discuss things maybe we will find there are some instances when pro-active measures should be taken.”

There’s a lot at stake.

John Monczunksi, who retired from this magazine in March, is a freelance writer.