It’s a football Friday at 4:30, and while the majority of campus employees are fleeing the premises, Jocie Antonelli, the petite and energetic Nutrition and Safety Manager for Notre Dame Food Services, opens her office on the second floor of South Dining Hall for a discussion on health, dieting and allergy safety — her specialties.

Antonelli, a registered dietician, has just dismissed her last student-client of the day — one of the 100 students, faculty and staff she sees each academic year for nutritional counseling. She’s pleased that most clients are merely looking to be proactive about their long-term health and want to start with what they’re eating. For those individuals, she tracks what they eat for a few days, creates a personalized nutrition profile and then reviews with the student how they can improve their diet, all for no cost. 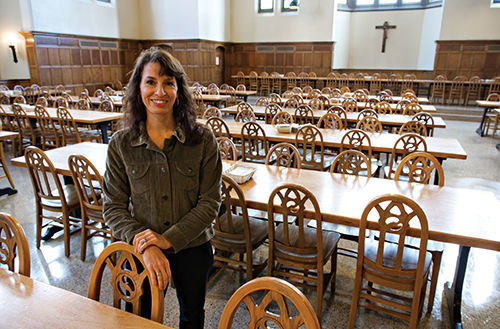 In general, the Notre Dame student population is much more fit than American culture at large. The freshman class far surpassed the national norm in Notre Dame’s new fitness assessment, which includes a 1.5 mile run, pushups, sit-ups and a sit-and-reach exam, and the average weight of those students is significantly below the national average for their age group. But with a focus on fitness, eating disorders are also noticeably higher, particularly with the females, Antonelli says.

“You’re going to find [high rates of eating disorders] at all the elite schools and Ivy League schools. It’s that Type A, perfectionistic personality,” she says.

That perfectionism is evident on days when it’s just above freezing in South Bend and yet the lakes are still swarmed by runners, most of them female, dedicated to working out regardless of temperature. And while the boys are also active, particularly in the weight room, the culture of fitness and healthy eating seems to hang heavier on the women than the men. For a glaring example, check out trays in the dining halls and you’ll quickly notice an incongruity between what the boys and girls consume. The more women at the table, the healthier the trays are likely to become, Antonelli says. With that in mind, she offers some unique advice for girls with body issues.

“I like when girls are in recovery for an eating disorder for them to eat more with guy friends than girlfriends. Guys aren’t conscious of things. They aren’t comparing, What do I have on my plate? What does she have? Ooh, I got a dessert and she didn’t. All these mind games the girls have,” she says. “It’s much more healing for girls who struggle with what to eat to eat more with guys than their girlfriends and roommates.”

If the men do notice what the women eat, they rarely say anything. But if another boy brings something too healthy to the table, say, a salad? Let the mockery commence. While the girls generally are focused on slimming down, most of the boys are looking to bulk up, build muscle, grow. But dorm rooms full of protein powders and bars and shakes, Antonelli says, are worthless.

“There’s nothing magical in those pills you can’t get through food,” she says. “The industry and the advertisements have done such a number on people who think they need to take all sorts of things — and they don’t.”

Even one of her own sons requests the powdered substances to top off his workouts, but she insists a peanut butter sandwich will pack just as much protein. And the key to any healthy diet, she says, are vegetables, and lots of them.

“I rarely come across people who get enough vegetables,” she remarks.

Whether or not they’re getting enough vegetables, Notre Dame students, along with the rest of their generation, are definitely more health-food focused than prior generations. Soda and pizza, college staples of students of yore, have given way to water, yogurt, granola and salads. Rather than coming to college and gaining the freshman 15 by bingeing on junk foods in a deep-fried rebellion, students are now defying their parents in a new way — by eating even healthier than they were at home.

The “it” foods among college students are shifting, and now quinoa ¬¬— a “powerhouse grain,” as Antonelli calls it — is one of those topping the dining-hall buffet lines in dishes like quinoa vegetable stew and quinoa pilaf with walnuts. The small, nutty grain is high-fiber, high-protein and high-iron, and caters to vegetarian, vegan and gluten-free populations, helping to replace such starches as rice and noodles. Those diets, Antonelli says, are the healthiest not only for us but also for the environment. According to the University of Chicago, the typical U.S. diet produces an additional ton and a half of greenhouse gases annually compared to a vegetarian diet. With the environmental factor in mind, Antonelli questions whether Food Services should be doing more to educate students about vegetarianism.

I wonder aloud if Food Services follows culinary movements, like the currently trendy quinoa. “The menus are developed around what the customer wants,” Antonelli says. “When the customer base is demanding certain things, the dining halls need to meet that need. So it changes over the years with what the trends are and what’s popular.”

Whether kids these days are spoiled by the number and quality of culinary options in the dining halls is up for debate. But what seems clear is that the spread is opening students’ eyes to healthier eating habits they can incorporate after graduation. The dining halls provide a culinary playground where experimentation and adventurous eating can occur.

When Antonelli joined the Food Services staff 18 years ago, only a handful of students had food allergies, generally peanut or egg sensitivities. Now she estimates that 9 percent of the Notre Dame population lives with a food allergy and tries to navigate the dining halls without risking their health. These days, allergy sufferers are the largest population she serves.

While no definitive explanation for the surge in allergies exists, Antonelli says one of the leading theories suggests that our sterile society’s use of antibacterial sanitizers and antibiotics, things designed to improve our health, has prevented the growth of good bacteria in our bodies and has actually weakened immune systems. These weakened systems can lead to such autoimmune diseases as celiac disease, an intolerance of the protein gluten, found in wheat, barley and rye, which has seen a dramatic boom in recent years.

It was seven years ago that Antonelli was first faced with students who needed gluten-free diets. To help provide options for those with celiac disease, she started making a weekly grocery trip to pick up a bag or two of gluten-free staples and customized orders. But as the number of allergic students increased, she could barely keep up with the demand, and the weekly shopping trip turned into a daily load of three and four heaping bags that would run out during dinner service. Last year, when the shopping finally became too great for one woman, the dining halls started ordering their own gluten-free products and established a gluten-free pantry.

For sufferers of all food allergies, the dining halls offer specialized plates which ensure that no allergens taint the food at any point in the preparation process. Students can choose the food they want and schedule what time they plan to come to the dining hall, and the plate will be ready in the kitchen when they arrive.

Responding to that student concern, Antonelli has undertaken a project to improve the accuracy with which Food Services identifies and labels allergens so students can more easily choose from what’s already out on the floor.

“It’s a project that helps us have better control purchasing, receiving and serving so that we can more safely serve the students with food allergies,” she says. “It was a thing that kept me up at night. I was going home worrying about these students that have life-threatening food allergies and their parents who entrusted us with the lives of their children. [I wanted] to make sure we were doing everything in our power to serve them the food that was safe for them to eat.”

The dining hall buffet lines now include placards that announce “gluten-free” and “vegetarian” dishes, as well as labels for healthy and low-fat items. Even in little things, like where allergy-friendly dishes are placed (far from things that could taint them), there is a keen attention to student safety and health. For that, Antonelli is to thank.