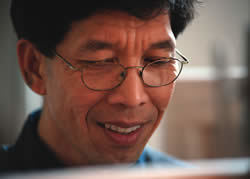 Pale morning light streams through the four tall windows that dominate the eastern wall of Father Martin Lam Nguyen’s room in the Holy Cross Annex, a 50-year-old prefab building tucked in the woods along the road to Saint Mary’s. “This,” the associate professor of art announces with a grin, “is a historic place.”

Indeed it is. Built originally to house classrooms and a gymnasium for high-school-age “minor” seminarians, the building now is an annex in name only. Holy Cross Hall, to which it once was appended, is long gone, a victim of the wrecking ball in 1990. Over the years, the gray metal structure has served a variety of congregational and University purposes, most recently sheltering the studios of Nguyen ’88M.Div. and his fellow Holy Cross priest-artists, the painter James Flanigan ’58, ’63M.A., and sculptor Austin Collins ’77.

As significant as all that may be, none of it represents the historical footnote Nguyen uses to impress visitors: “You,” he intones with mock reverence, “are in the head coach office of the movie Rudy. All this paneling was added for the film [about the ND football walk-on]. There was a partition over there,” he gestures, “but I took it down.”

Soon after joining the Notre Dame faculty 12 years ago, the Vietnamese priest transformed the one-time movie set into his studio. From this cluttered space he has since created thought-provoking art intimately shaped by his own history.

Typically that art consists of assembled fragments which add up to more than the sum of their parts. “Most often my projects are very big—both materially and in concept—and take four or five years to finish,” he says. Nguyen’s most recent piece, Face to Face, consists of 365 meticulously detailed pencil-drawn portraits of a little girl, each recording a day in her life over a year. The title refers to Exodus 33 in which God speaks to Moses “face to face” as a friend. An earlier work, Prayer of Sorrow, is made up of 36 identical 10-by-16-foot paintings of purple irises, a memorial to the victims of the Tet offensive in the Vietnam War.

Why the fragmented approach?

“I think it is close to life experience,” the 49-year-old Holy Cross priest says. “Life, you know, is rarely something big and traumatic. It’s just like pieces together. You get up, you have coffee, you do laundry, you go to work—and that’s life. It’s small things, small efforts by many people over many days. At least that’s how I see it.”

Escaping Vietnam
Nguyen’s own life, however, has been shaped by some large, traumatic events that have, in turn, shaped his art. He walks across the room to a file cabinet and plucks out an album and a stack of papers, each emblazoned with what appears to be a black ink blot. The images actually are faithfully rendered silhouettes of the estimated 3,000 tiny mountain islands in Ha Long Bay off of northeast Vietnam. The accompanying album contains 3,000 brief entries composed of a phrase such as “The Blood.” Each entry is linked by a number to one of the “ink blot” mountain images. Together the images and memory album comprise a work called Mountain Waits that represents Nguyen’s life from his earliest memories as a child to the point when he created the artwork.

Of all the memories, perhaps the one that shaped his life the most was when, in 1979 at the age of 20, Nguyen and his father fled Communist Vietnam in a daring escape by boat. After spending time in refugee camps they eventually made their way to the United States, where they reunited with his mother and other siblings who had fled earlier.

“It was our third attempt and very dangerous,” Nguyen says. “I calculated it would take eight hours to reach international waters and be safe. We left in the middle of the night. At daybreak the last thing I see [of Vietnam] was those mountains, the islands.”

That experience became the basis for Mountain Waits. Creating the piece was such an emotionally wrenching experience that it placed the Vietnamese priest in a period of deep depression, causing him to seek treatment.

“It brought back very sharp memories. I can even smell the rice in the refugee camp in Hong Kong,” he says. “It was hard. Sometimes I felt resistance within me to write the memory down. Remembering something is one thing, you know, but when you write it down, it’s an act of acknowledgment, of acceptance.”

Nguyen hopes the art project is a healing catalyst for others as well. While he had a specific personal memory in mind when he wrote “The Blood” and similar cryptic descriptive phrases, he notes the words may trigger a powerful memory for someone else. “When you take the risk of being so personal, you allow others who view the art to do likewise.”

Ultimately all his art is driven by faith, Nguyen says. "I cannot separate my work from my life as a priest. All that I do, I try to relate to that mystery that is God. I try to find ways to portray that longing that we have, that reality.

John Monczunsk is an associate editor of this magazine. Email him at monczunski.1@nd.edu.