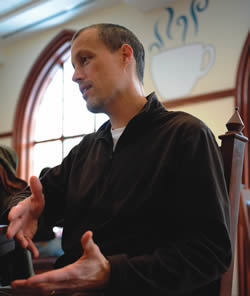 On a day when the newspaper is running stories about the dangers of hypothermia, Matt Bloom is happy to leave his office and head across an icy Notre Dame campus to the bookstore café for coffee. Make no mistake, however. He’s crazy about his job.

“I love this,” the associate professor of management says. “Teaching is a privilege.”

It’s also a job the self-described “Kansas boy” turned his and his family’s lives upside down to pursue. Bloom was in his early 30s when he and his wife, Kim, quit their jobs, sold their house and, with their two young boys, “moved halfway across the country” so he could pursue a doctorate at Cornell.

Several of his colleagues told him he was making a mistake, but Bloom says he had one persistent thought running through his mind. “I didn’t want to be 60 or 70 and say ‘I wish I’d tried that.’”

Now, at age 46, he can see that his risk paid off. Eleven years ago, with doctorate in hand, Bloom scored a job teaching at Notre Dame. The career change from business consultant to professor worked out so well that his wife, who had been teaching high school science, decided to take a page from his book. A few years ago, he says, his face lighting up as he tells the story, Kim instituted her own career change by enrolling in a seminary to become a Methodist pastor.

“God wants us to enjoy work,” he affirms.

In Bloom’s case, taking a break from work to talk about work and its meaning makes perfect sense. His research speciality is work, and he’s quite passionate about it.

The research, using real-world work situations, has led him to some eye-opening interviews with people whom he expected would be among the millions of Americans who can’t stand their jobs — which, he says polls suggest, includes almost half of all working Americans.

But sometimes he can be surprised. When he talked to a woman who worked as a supervisor in a hospital’s morgue—her job was to prepare and store bodies until they could be received by a funeral home— he expected her to be among those unhappy wage earners. Instead, he says, she told him how much the work meant to her. “She said she felt like she was helping give them back their dignity.”

That belief gave her work meaning, he says, and the research he’s involved in suggests that meaning can be key to positive work experiences.

The importance of meaningful work

Meaningful work is an issue that definitely concerns Notre Dame students. The business classes Bloom teaches focus on innovation, which looks at creativity, and on the science of happiness, particularly as it relates to work. This realm of study means that students in his classes frequently want to discuss their personal job choices and options. That, he says with a wince, can be tricky.

“Giving advice is a privilege and responsibility,” he explains. “The students want to hear: ’It’s okay to follow your heart.’ As a parent, I understand that parents want their children to select well.”

While he may wish to encourage their dreams, he says, “I don’t want to overstep what parents tell their kids.” He tries instead, he says, to encourage students’ inclinations in other ways, sometimes suggesting that they pursue an area for their own pleasure if it isn’t part of their chosen career path.

Walking that fine line can be heart-breaking, however. Once, Bloom says, a student who was earning a degree in accounting stopped in his office, visibly upset. “I hate it,” the student said of his accounting major.

“He started weeping,” Bloom says. “He wanted to go into philosophy.”

During a football weekend a couple years later, Bloom ran into the young man, who had taken a job with an accounting firm. “He told me, ’I’m good at it, but I hate it.’”

Bloom hasn’t seen the student for a few years now, but the memory of their encounters still clearly distresses him.

While Bloom wasn’t content with his pre-professor work, he says his Notre Dame job makes him happy because he enjoys it and sees his work as having a positive impact on the world. Part of that impact, he hopes, will be that his research helps change how companies operate.

That’s why he prefers to move out of the lab for his research and partner with real-world organizations, generally health care systems. Convincing business leaders that happier employees are better employees requires strong proof, he says, because the bottom line is always on their minds.

Bloom’s personal bottom line includes a deep, spiritual component. “I’d like my research to contribute to our understanding of how to foster work that honors God.”

When our conversation comes to an end, and he takes a last sip of his “plain, old, boring coffee,” Bloom smiles. It’s time to go back to work, and he can’t wait.