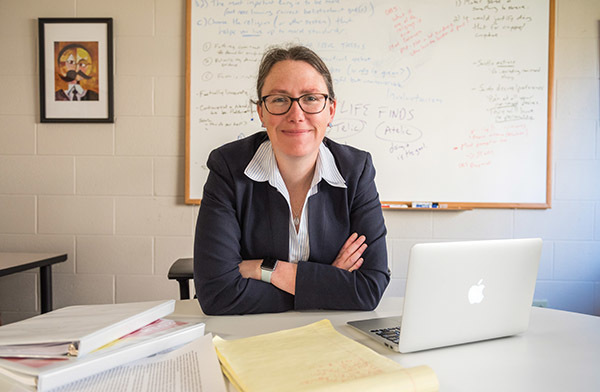 Meghan Sullivan didn’t set out to be a philosopher. In fact, the North Carolina native says that in high school her best friend’s dad was a philosophy professor and “we all thought his job was just the most made-up job ever, a total joke.” When she and her friends would run across one of his books at the local bookstore, they would entertain each other with mock-dramatic readings. “So it’s funny,” she says. “I knew what a philosophy professor was in high school and absolutely didn’t want to be one.”

Today Sullivan is not only a philosophy professor but also director of the University’s philosophy requirement, making sure Notre Dame undergrads get properly schooled in the metaphysical arts. Among her specialties is “time and modality,” and a recent book, Time Biases, “develops a theory of diachronic rationality, personal identity and rational planning.” Despite the erudition and scholarly chops, Sullivan’s manner is as easy and real as her Carolina roots. She can talk about the Reformation, write about midlife crises and narrate a video trailer that explains her popular course, God and the Good Life, with equal doses of plain speaking and cerebral sophistication.

She moves easily from the problem of evil to questions that defy definite answers to the difficulty of proving the existence of God — and then notes the importance of a Roth IRA. She refers to Plato and Descartes as if they were colleagues. The whiteboard behind her says things like “soul how do you tell” and “telic” and “atelic” and “doing is the goal,” alongside other cryptic graffiti. Undergrads keep appearing in her doorway. She gets really animated pursuing questions — and getting others to chase down answers with her.

It was the questions that derailed her legal aspirations. She was a pre-law student at the University of Virginia when she signed up for Life and Death, a practical ethics class that took on topics like the death penalty and abortion. “And I loved it — 10 times more than I loved any other class,” she says, citing a term paper answering “Is suicide always immoral?”

“It wasn’t an excellent paper,” she confesses, “but the process of writing it was just so much fun for me — especially ’cause I got to think about what’s the truth. That’s what the teacher wanted to know: Figure out the correct view that a good person would have on this question. And here I was, an 18-year-old sitting in the library thinking, ‘Suicide is totally permissible. Premise One: Freedom!’”

Her thinking changed a year or so later. It was the first anniversary of the 9/11 attacks, she explains, and there was talk on campus of death, terrorism and the heartbreak of loss. She read newspaper stories about those who had lost loved ones — people, she says, who had wonderful lives and beautiful children, successful careers and happiness, and then such grief and sadness. “And I just remember thinking, ‘People should talk about how fragile life is, and how important it is, and how we can make sense of this.’”

She had not been raised in a religious household. A call home didn’t soothe her distress. She thought maybe there’d be a vigil, a lecture or talk on suffering. But nothing appeared on her radar.

“So then I thought, I bet religious people on the anniversary of a major world event like this — the point in my mind, my naïve point, was that organized religion would get people together to talk about world affairs in a nice way, a nice-person way, and then do community service or something. So I thought, I’ll find a religious group tonight, a big one, and they’ll have something important to say and that’ll be good.”

There was a Catholic church near her dorm. “I’ll go there,” she thought. “So I packed up and dressed up a little bit and walked over to St. Thomas Aquinas for their weekday Mass, expecting there to be hordes of people to memorialize 9/11, and this rousing speech by a priest. And I get there, and it was just a couple ladies, me, the priest, no mention of September 11th. Very standard weekday Mass, with two of the more obscure readings and a 30-second homily, and then a celebration of the Eucharist.”

Then a couple of divergent things happened. “I was, on one level, totally weirded out. . . . Sometimes you’re in these events, and you immediately realize you made a mistake and you have no idea what’s going on. But you can’t leave. So I have this initial kind of panic.

“But then I settle in and I realize that was totally where I needed to be. This extraordinary sense of peace, and also intense curiosity. Just looking around and seeing these people. . . . It was like they were kind of hearing a different frequency than I’d ever heard in my life. And just seeing there’s bits of reality that they know about and that I’m clearly looking for, and it’s around here, but I don’t quite know how to access it yet.”

The experience, she says today, “was really profound. I think it was an experience of God.”

She decided to go back the following Wednesday — like “a good, rational person trying to repeat the experiment, ’cause I thought that worked really well the first time.’’ After a few successive Wednesdays someone kindly suggested she try Sundays, explaining, “That’s probably where you’re gonna get a better sense of what this is all about.”

Her conversion, she says today, “totally changed my mind on most of . . . I suspect almost all of the moral views I defended that first semester in college” — but, she adds, “that didn’t diminish how much fun it was” doing philosophy.

This is the backstory of Meghan Sullivan’s life-changing embrace of Catholicism. But there’s another key ingredient. “The true answer’s gotta be with the inworking of the Holy Spirit or something, some theory like that,” she says. “But people never want that part of the story when they find out I’m an adult convert. If you say, ‘The Holy Spirit called me,’ they’re like, ‘That’s not it. What was happening in your life around the time this other stuff was happening?’” Thus, the backstory, the version to placate the skeptics, the rationalists.

Sullivan, too, is rigorous in her philosophical expeditions and submits her students to the discipline of logical argument in God and the Good Life, an immersion into philosophy for first-year students.

“And this is exactly what Aristotle tells his students. He’s giving the students all these definitions about happiness and virtue. And then he pauses and he’s like, ‘We are studying this not so you would know what virtue is, and not so that you would be able to give a definition of what Plato meant by it — but so that you can be happy. Otherwise, there is no benefit.’ Which is such a radical thing to say to your students — that I don’t want you just to know about philosophy, though that’s great. But I want you to be better, to be closer to whatever it is that goes into a good human life.”

She goes on: “And this is one thing that’s super cool about being at a Catholic university or teaching in a Catholic context. You can really say that to students here. Some people dissent and have questions about it, but we can still take seriously that proposition. Your education’s not just gonna get you a great job. It could make you a better version of yourself, help you have better relationships, help you have a better sense of reverence in the world, help you see things that you might have missed before, and really open things up for your life. I totally believe that.”

“First, how do you decide what to believe in the first place? Where do you look for evidence? Which questions in your life need a lot more evidence — or do you think maybe you’ll never get the evidence that could decide it for you?

“Do you want to practice your religion as an adult? If you were raised Catholic, do you want to stay Catholic? Do you want religion if you weren’t raised in one? What does it mean to have religious faith? Would it be good, or bad? And we take atheism seriously as an option, too.

“Then, what do you owe other people? And everybody. We try to push that question in the direction of, are you living up to your moral obligations? And if you really took some of these different moral theories seriously, how would you change your life to better live up to their standards? ’Cause it turns out most moral theories are pretty demanding; they ask a lot of you to be a good person.

“And finally, what would it take for your life to have been meaningful when you die? And what do we think about how our finitude affects things?”

The next student knocking at the door is told to “Wait just two minutes, OK?” so I can’t wait any longer to ask, “So, what is the meaning of life?” She hardly pauses to ponder. “I don’t know,” she starts. “To seek the good, contemplate it forever. I’m trying really hard to sell my students on the life of contemplation this semester, and I don’t think they’re buying it.”

It’s hard in the world we live in, I reply.

“Yeah, and it’s hard to even figure out what contemplation is, you know? It’s not just staring at a tree. But it is cultivating a certain kind of joy and satisfaction in things that aren’t achievements. But this is the thing we push them to be. . . . Every part of our competitive, evolved being wants to get things, get jobs, accumulate goods, do things. And that can’t be all there is to our lives. There’s gotta be some other, more basic core that’s gonna make our lives wonderful.

“The biggest thing — and you can’t say this enough to young people I think — is that your life is valuable. And it’s awesome to do all these things. It’s fantastic to be running for student council, or to get these brilliant internships. We’re so proud when we do these things, but none of that is why you’re valuable. It sounds cheesy almost, but you realize people need to be reminded of it all the time. And it’s not even a 21st-century phenomenon. This is another great thing about reading philosophy. You get to the end of Aristotle’s book and he’s telling exactly the same thing to the teenagers in Greece. He’s like, ‘Guess what? Contemplation is gonna be really important, too. We’re just now bringing it up and it’s weird. I know you guys don’t understand what I’m talking about, but that’s what we’re really here for.’ And then his students are, like, scratching their heads.”

She likes that. Getting students to scratch their heads.