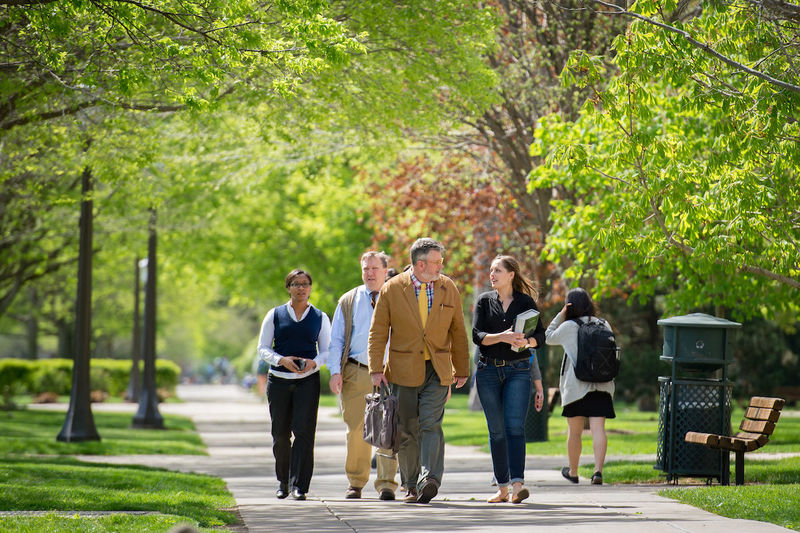 Desch, in jacket, talking with a student researcher in 2017. Photo by Matt Cashore '94

As the United States navigates rising tensions with Iran, American leaders would do well to ask WWBD — What Would Bismarck Do?

That’s Michael Desch’s pithy summation of the situation, which he shared with me over a chat inside his campus office. As I’ve watched a succession of grim headlines document the escalating situation, I’ve wondered what’s next, and what a better way forward might look like.

So naturally, I came to Desch, Packey J. Dee Professor of Political Science and director of Notre Dame’s International Security Center, who is known for his deep expertise and realist approach to foreign policy.

And Desch says he often looks to Otto von Bismarck, the 19th-century “Iron Chancellor” and architect of German unification, for inspiration. Bismarck’s calculating, pragmatic realpolitik and his ability to grasp complex issues is the best approach for the United States, he tells me. While many Americans might see geopolitics as a John Ford western where the good guys wear white hats and the villains wear black ones, the reality is far more complicated.

“In international politics, I always say, what would Bismarck do?” Desch says. “And I think Bismarck would be able to navigate the complex waters of the Persian Gulf with far more sophistication that almost any American leader since Richard Nixon, or maybe George H.W. Bush. And I think Bismarck or [Bush] 41 would recognize that, first of all, there are no black hats and no white hats — everybody’s wearing gray. And secondly, that with any given actor in this gray region, we have common interests as well as conflicting interests.”

And in recent years Desch says, the United States has done a poor job of working to promote its interests. It’s been “remarkably obtuse” about Iran and its own increasingly cozy alliance with Saudi Arabia, and it “drew first blood” by pulling out of the Joint Comprehensive Plan of Action (also known as the Iran nuclear deal), a move he says has taken pressure off Iranian hardliners.

“Nobody thinks that that was a perfect agreement, and critics of the agreement have highlighted some of its limitations,” Desch concedes. “On the other hand, in terms of the key thing that it was supposed to do, which was to put the brakes on the Iranian nuclear program, it was about the best deal we were going to get. And I think it opened the door to the possibility of at least a less confrontational relationship.

“When you think about it, the concern among critics of the JCPOA was that well, we’re taking the pressure off these guys, so the mullahs and the Revolutionary Guard and the sort of bad actors in Iran are going to have their cake and eat it too. I always thought that that was a wrong-headed way to think about it. The truth of the matter is that the mullocracy and the hardliners in a way are dependent on the image of the United States and some of the other regional actors as being unremittingly hostile in order to justify their mismanagement and authoritarian rule in Iran. Where you’ve seen trouble has been precisely those periods of time in which the Iranian public didn’t feel like they were being assailed from without and then starting making more demands for political reform at home.”

If there’s an upside to where we are now, Desch says, it’s that we might have a new opportunity for a deal.

“I don’t think you want to be Pollyannaish. I mean, the situation is dangerous,” he says. “On the other hand, crises are both sources of danger but also sources of potential leverage. And to give President Trump his due, there’s a story that one could imagine in which the president is doing exactly what he did with the North Koreans.”

In the summer of 2017, amidst escalating tensions with North Korea, Trump said the country shouldn’t threaten the United States or  it “will be met with fire and fury like the world has never seen,” before seizing the opportunity to talk with Kim Jong-un.

So while the future of U.S.-Iranian relations remains uncertain, there are ample opportunities for better outcomes, Desch says.

“I fear relations won’t be as stable as they could be,” he says. “On the other hand, I do think that when President Trump says he doesn’t want war, he’s sincere about that. I think only somebody ‘far gone in utopian speculations,’ as the Federalists used to say, could think that a military operation against Iran could turn out well. I’m hoping cooler heads will prevail.”

And going forward, Desch says the United States could learn a great deal from Bismarck and from another 19th-century statesman — Henry John Temple, 3rd Viscount Palmerston, who twice served as the British prime minister.

“It was Lord Palmerston who famously said that Britain has no permanent allies, just permanent interests. And that’s how we should be thinking about the Persian Gulf region and the Middle East,” Desch says. “What’s our big interest? Our big interest is no wars, no further nuclear proliferation, and unimpeded flow of oil. And we should say, given that, let’s choose our policy based on what is most likely to insure those things, and that might involve accommodating the Iranians on some issues.”

At the end of the day, Desch argues, the United States should push unapologetically for its interests, and it should do so in a sophisticated fashion that recognizes the inherent complexity of geopolitics, particularly in the Middle East.

“We need to be less absolutist about what we think is an acceptable situation in the region,” he says. “We’ve got to learn to live with ambiguity in the gray zone, and think smarter about how we think about our interests. With the Saudis, I’m happy to work with them when it’s in our interest, but if the past two years haven’t made clear to most Americans that this is a fundamentally problematic regime, we need to wake up and smell the coffee on that. And likewise, if we don’t realize that successive Israeli governments have painted themselves into a corner by not settling the Israel-Palestine conflict, we’re not doing Israel any favors, and we’re not doing ourselves any favors. So what we need, in a way, is an America First attitude toward the Gulf.”