Sister Juliet Namiiro, a tiny, serene, irrepressible Ugandan disciple of St. Francis of Assisi in a tan habit and fleece vest, is explaining to me how I might raise pigs to finance my education.

It’s a process she knows as well as the liturgical theology that she’s traveled from East Africa to Notre Dame to master. Her uncle taught her how to do it.

Her uncle also taught her how to hold a pen and how to count to 100 — when she was 14, illiterate and hadn’t attended a single day of school in her impoverished and turbulent early life.

When Juliet was 16, this same uncle — a widower, an HIV-positive farmer and fisherman who was raising two younger children of his own — died. But in two short years he had given his niece everything she needed to change her life: a home; a practical grasp of money, how to count it and how to make it; a shot at an education. Not to mention stability, love and hope. 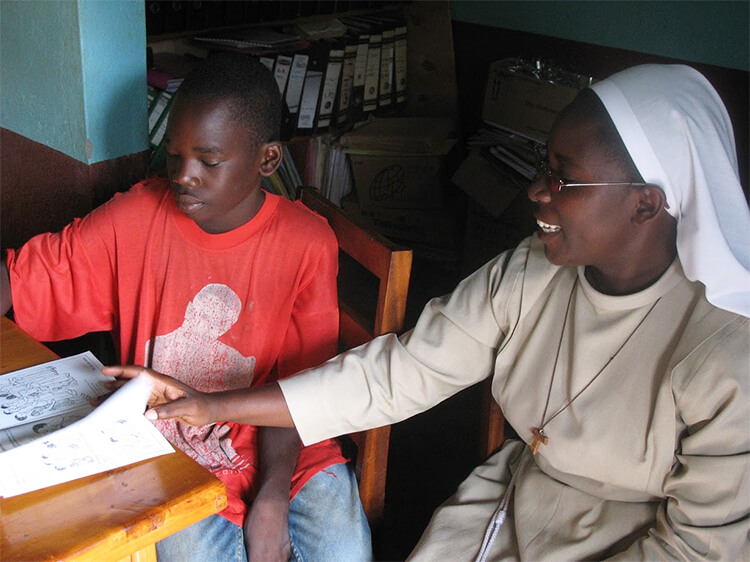 Sister Juliet Namiiro, LSOSF, a life in works of mercy.

All of it, in a word, was grace. And it started with a pig.

So, she says: You get a pig. That’s the hard part when you are poor, the bespectacled nun points out. In Uganda today, where things are on the up and up but an estimated one-third of the population still lives on less than $2 a day, a healthy, weaned, 3-month-old pig costs $50.

Once you have the pig, you breed it. Each litter takes about four months, from conception to half a dozen or more squealing, hungry piglets. You give the babies a few months to wean and frolic free and happy. Then you sell them. Already, a return on your investment.

By then, mama is working on Litter No. 2. This time, you keep one piglet to become the next mother. After four litters, you sell the first pig along with her piglets. Now you’re a pig farmer.

Vastly more important 25 years ago to teenaged Juliet Namiiro was that she had the money her family never could have given her to go to school. So Juliet the farmer became Juliet the student.

Her uncle didn’t want her starting at square one, so he instructed her to tell the school that she had been to school before, until the violence of the Ugandan Bush War had disrupted life and forced her to stop. They placed Juliet in the fourth grade, as long as she could keep up.

But the war story was a lie, she says, blushing through a smile. The truth is that her family was far poorer than most. The civil war, which started in 1981 when Juliet was four years old, ended when she was 9 and took the lives of as many as half a million Ugandans, left her with other scars. Real ones. Many nights young Juliet slept in bushes and would wake up with legs torn and bleeding from the thorns and elephant grass. She had no medicine to clean or salve her wounds.

She started in Primary 4, in a classroom with children half her age. After the first report card, she was last in her class. By the third report, she was moving up to fifth grade.

Along the way, Juliet noticed something that still bothers her: Primary 5 was a smaller group of children. Far fewer girls, in particular. This was not unusual. At the learning level when many Ugandan girls are wrapping up their formal education, Juliet was just starting hers.

In time, she made enough money in the swine trade to carry her through P7 and the national exams, then into four more years of upper-level education. She spent some on travel, out to the beachy, breezy islands in Lake Victoria, for instance, and dreamed of becoming a police officer, which in her young mind represented an attractive balance of responsibility and freedom.

Police officers moved around for their assignments. Juliet didn’t want to stay in her village and resist the inevitable pressure of an arranged marriage, or go to the city, get an office job and become pregnant. She wanted to keep learning.

Back at school, she watched the Little Sisters of Saint Francis in action, and considered a second option. Sister Evelyn, from neighboring-yet-faraway Kenya, gave out books and pens to kids whose families couldn’t afford them. Here was a woman doing something she wanted to do with her life, Juliet thought: helping children with the same problems she had faced. She told Sister Evelyn she’d become a nun if they’d let her.

Juliet wasn’t going to Mass at the time. The daughter of a Catholic father and a Protestant mother, she wasn’t even going to church, except once in a while with the Pentecostals. When she was 13, she says, she had gone to one of their healing services and awoke the next morning to find that the ganglion cyst on her wrist had disappeared.

Sister Cecilia wasn’t having any of that. She knew Juliet’s father and chided the girl. “Since when are you a Pentecostal?” So Juliet studied the catechism and received her First Communion at age 17. Soon she prevailed over her mother, who wanted her to become a nurse, and entered the order.

Her education continued, delivering opportunities for travel: religious formation in preparation for First Vows, then training in social work in Kampala, then a secretarial course — on orders from her superior — and night classes in guidance and counseling.

Seems like a lot? “I walked four miles to secondary school every day,” she shoots back. “That was harder.”

Eventually her order found money to send her to the Catholic University of Eastern Africa in Nairobi to study philosophy and theology. And in August 2016 she arrived at Notre Dame.

In all her years at Uganda’s Cheshire Homes and the Nkokonjeru Providence Home, taking care of orphans and the disabled, Sister Juliet felt she lacked the theological depth she needed to give to others something even greater than the gift of earthly hope her uncle had given her: answers for the soul and spirit as well as the body and mind. Kids and co-workers would ask her to explain how Mary could be the “Mother of God,” or what the Trinity is, or what it means to be “conceived by the Holy Spirit.”

Tough questions, when you open your mouth to answer them. “You can’t talk about something you don’t know,” she says.

Not many African women study theology, she continues. She worries about the Church, in Africa and elsewhere. While Christianity is officially growing, she sees the same danger for apathy that has the devout in Europe and the United States wringing their prayerful hands.

Religious education is compulsory in her homeland, where Roman Catholics (42 percent), Anglicans (36 percent) and Muslims (12 percent) coexist peacefully, atheism is virtually unknown and the government sees religion as an ally in Ugandans’ moral and civic formation, even as political forces advocate for the legalization of abortion and gay marriage.

“People may go to church, but you don’t know who is really strong in faith. It’s between them and God,” she says. “It’s in their hearts.” 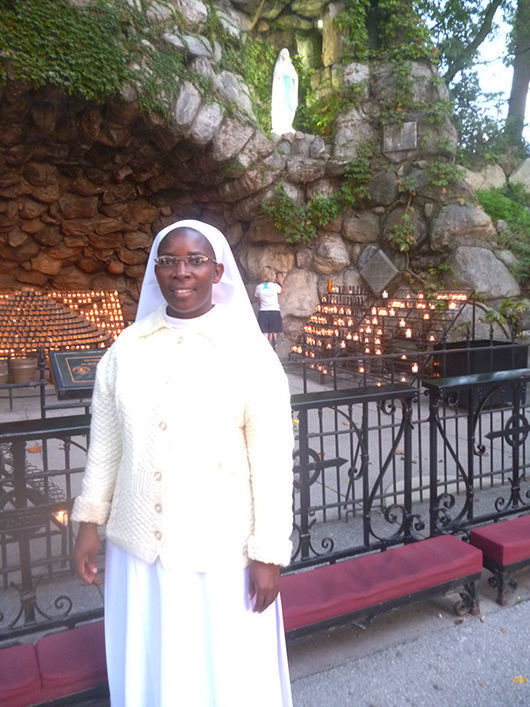 The Little Sister of Saint Francis found her campus community at the 6:45 p.m. Grotto rosary.

Hearts are what Sister Juliet wants to engage. Studying liturgical theology has immersed her in the sacraments, in the roles of the priests, religious and laity, in the saints.

And, in marriage. Many rural Catholics in Uganda don’t get married in the Church. Polygamy is legal, and provides men with more children — and therefore greater influence and social stature.

The Church has plenty to say about the problems with that, and with many other things. And as her educational journey comes to an end, Sister Juliet has plenty to say, too. The master’s degree she’ll receive at Commencement next month makes her the most educated person in her village. When she returns home and reports to her religious superior, she’ll have ideas to share.

She wants more of her sisters — more women generally — to advance their education. She wants to start a “real” Catholic school independent of government support — and interference.

With help from what she’s saved from her graduate student stipend, Sister Juliet supports the microlending program she already founded, Saint Kizito Farmers’ Group, which builds members’ income on pig sales and other project, so their children may attend school, and so all of them, boys and girls, may stay in school longer.

Call it the multiplication of pigs and opportunity.