Reyniers Life Building, a single story of brick and glass block so plain as to be practically invisible, stands among heaps of coal and stone and forgotten shards of train track on the northern frontier of Notre Dame’s campus. It is not a place one goes for coffee, though biological anthropologist Susan Guise Sheridan insists she keeps a pot there when she teaches her osteology class.

No classes, no students, no coffee today. In fact, the building with the ironic name is dead quiet when I arrive, carrying a box of cupcakes. But the light is on inside Sheridan’s lab, a scene a photographer describes as “a fun place full of bones.” 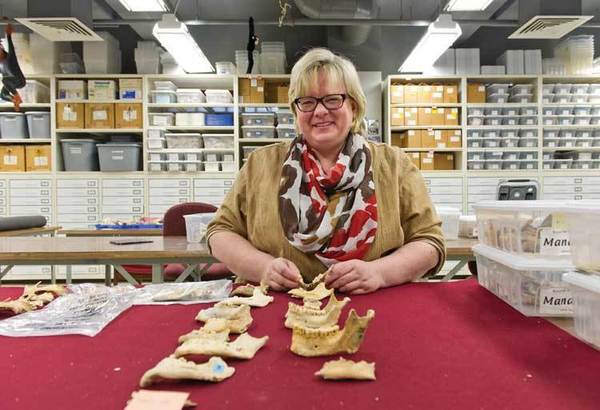 Atop rows of tables lay trays of what to my untrained eye look like hips. Stacks of plastic storage bins marked “hands” and “feet” and “assorted fragments” from the fifth and sixth century tombs of the Saint Stephen monastery in Jerusalem await investigation. Along one wall stand drawer units full of carefully sorted calf bones, shoulder blades, vertebrae and teeth. And down the hall in what looks like a doctor’s examination room are a couple of subadult Nubian mummies and fat packets of bone powder that could pass at a glance for cocaine.

It would all be a little creepy were it not for the fuzzy orangutan toys slung from the lab’s light fixtures, the Jolly Roger in the corner and the group photos of students with mid-’90s hairstyles.

This is Susan Sheridan’s domain, and it bespeaks the associate professor of anthropology’s humble approach to her work — generous, innately collaborative and student-focused — the deadly serious subject matter balanced with her wry sense of humor. Characteristically, Sheridan says the room belongs as much to the advanced anthropology students she’s tutored, about nine at a time each fall, in bone analysis over the last 20 years.

Sometimes she has to remind them that these bones belonged to people. “The real danger is when you’re looking at something and you find a really cool pathology and you hear them going, ‘Oh, man, this is neat!’ And then you think, whoops, somebody had to live with this. But you can’t fight that fact, that it’s a really cool pathology. There’s no getting around it.”

Bones are Sheridan’s window into the mysteries of ancient civilizations and human adaptation. Bones reveal secrets, if you know how to read them. One cheeky science writer described the study that Sheridan and her former student, Lesley Gregoricka ’05, a professor at the University of South Alabama, published last year as “a damn tattletale” for detailing the presence of animal proteins in the supposedly ascetical, vegetarian diet of those fifth-century monks.

The truth is we love our skeletons, and our culture is more bone-crazy than ever. It’s not just popular TV shows like the CSI franchise. News of the final genetics report confirming that the remains unearthed beneath a parking garage in Leicester, England, were those of the controversial King Richard III grabbed global headlines in February. Days later, Google’s daily doodle marked the 100th birthday of the late British paleoanthropologist Mary Leakey, whose discoveries of hominid fossils in eastern Africa illuminated the origin of our species.

Leakey’s centenary seems worth celebrating to me, thus the cupcakes. Wisely, Sheridan selects hers before pointing out that paleoanthropology isn’t her thing. “My guys are maybe about 5,000 years old and younger,” she says, drawing an important distinction in my first minute of Bioarchaeology 101. Leakey’s big finds, of course, take us back millions of years.

Er, still. Why our fascination with the human chassis? 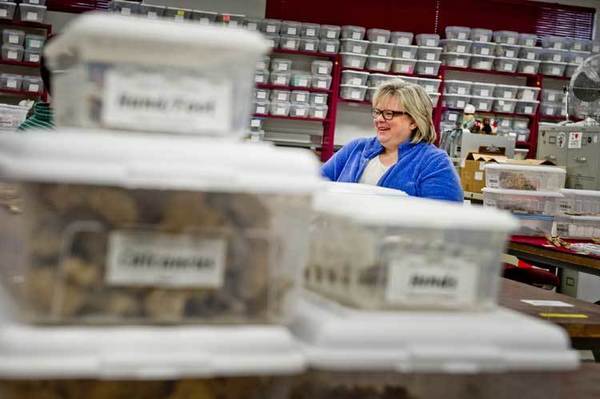 “It’s us,” Sheridan explains. Bones speak to our “infinite curiosity” about ourselves, which extends to her colleagues’ work in genetics or primates or evolution. “I mean, it’s not hard to teach biological anthropology classes. . . . Part of me thinks that if you can’t do it in this field, you must really be working against the material.”

The prehistory of Sheridan’s own fascination with bones goes back to the books on cavemen she checked out of the library when she was 12. Still, she says, “I didn’t know what anthropology was until I got to college.” At the University of Maryland, she dove into science, met Carl Sagan, switched majors “a ton,” took the chemistry courses that would inform her entire career, and found her way to anthropology through “a really good set of teachers.”

Back then she was a fan of the TV show Quincy, M.E., which chronicled the casework of a Los Angeles medical examiner. “Today it’s people watching Bones,” she says. Quincy inspired her to pursue a master’s degree at Maryland in forensic anthropology, and she sees the same attraction to crime-solving among students today. “And I adamantly try to talk them out of it,” she says.

She knows from experience how important that work is. Sheridan spent her last year at Maryland interning at the Armed Forces Institute of Pathology and years later testified in the murder trial of a man she was certain had savagely attacked a young pregnant woman and buried her alive.

“A lot of these kids come in thinking it’s cool, but they don’t realize the psychological toll it takes on you. They don’t realize that while you’re working on the body, there are grieving parents standing right there whose child is dead.”

Sheridan’s own path took her to the University of Colorado and big-picture questions about human adaptation, which she sought to answer through her dissertation study of Nubians who, about 1,500 years ago, were simply wrapped in fabric and placed in the arid ground, mummifying them. The pair down the hall — a newborn infant and a child of about 8 or 9 — are just two of around 400 from which she extracted bone slices, burning off organic material and grinding the slices into a powder to analyze trace elements of nutrients in the collagen. Analyzing the samples allowed her to draw conclusions about diet and disease in a community in social flux.

Notre Dame hired Sheridan straight from Colorado, and the mummies eventually followed as teaching materials for her osteology classes and the National Science Foundation field school she’s led for 12 years. Meanwhile, Sheridan’s unique scholarly network as a bioanthropologist at a Catholic research university was shaping her career.

Coming across the monks’ bones about 18 years ago was “completely dumb luck.” Invited to give a forensic anthropology presentation to Israeli police, she mentioned the trip to Notre Dame theologians Eugene Ulrich and James VanderKam, then her office-neighbors in Decio Hall, who happen to be experts in the Dead Sea Scrolls. They suggested she have lunch with a colleague at Jerusalem’s Ecole Biblique, a leading center for studying the scrolls. Dominican friars erected the school in 1890 upon the ruins of the monastery that Byzantine Christians are thought to have built to house the relics of Saint Stephen, the first Christian martyr.

After lunch, her hosts showed her the monastery tombs. Since then, with the blessing of the Dominicans and local authorities, Sheridan says she spent about five years total in Jerusalem excavating bones for study. One early finding illuminated prayer practices among these holy men of Eastern Christianity.

“When we pulled the bones out we found the legs were really pathological,” she says. Biomechanical analysis showed the monks were kneeling — a lot. That was a surprise, but a Notre Dame liturgist, Rev. Michael Driscoll, was able to find textual support for repetitious genuflection in the literature.

If all that genuflecting sounds painful, Sheridan says it probably was. Bones rubbed against bones at the knee, sometimes to a shine. Bones in the big toes fused as a natural response to the repetitive stress. “Sit down, kneel down, lay down: Everything hurt, all the time,” she says. Exactly why the monks sought this kind of suffering is still a mystery, one that Sheridan hopes to unravel in her ongoing collaborative studies of the collection.

These days it’s not hard to find Ph.D.’s in the field among Notre Dame anthropology majors who studied the monks. Others cut their teeth, so to speak, on the collection Sheridan acquired from a 1970s dig at the early Bronze Age city of Bab edh-Dhra, on Jordan’s side of the Dead Sea. The bones, burned several shades of black, brown and white, commingled in the collapse of their charnel house and damaged at some point by looters — all before they were unearthed — sat neglected at another university until about 2002. It’s taken large teams of students about four years to clean, sort and number them. Along the way, they cull groups of bones for study.

The work is not done. “Almost every time I open one of the drawers, I hyperventilate,” Sheridan says with a low, truthful chuckle. But, she adds, the rest of the archaeology from the site, co-directed by R. Thomas Schaub ’53, is good and the bones, which filled a mid-size U-Haul truck, represent more than 1,000 people. It’s the only collection from that time and place. “And it’s a period when they start to build big walls around their towns and begin the process of urbanization. So there’s a lot we can learn from them,” about disease, diet — even violence.

No doubt we will. Two years ago she started a Facebook group, BioAnthropology News, signed up all of her students and before long was welcoming the likes of Donald Johanson, who found Lucy; Lee Berger, the recent discoverer of Australopithecus sediba; and Jane Goodall, the primatologist who needs no introduction. Some 3,600 people in all — from senior specialists to the simply curious — comment and interact in a thriving community of shared interests.

Sheridan dreams of graduate students who can assemble full skeletons out of the Bab edh-Dhra bones, a dream she may fulfill once the department launches its doctoral program in 2014, and she will travel to London this summer to study other Bronze Age collections with Professor Jaime Ullinger ’99 of Quinnipiac University. She’s grateful that Notre Dame has enabled her to check two top items off her bucket list: She got to hold those Dead Sea Scrolls — and the skull of one of the writers — and she joined an alumni cruise that allowed her to set foot on Antarctica. “Moments like that are where you go, ‘Wow. This is cool, and they pay me to do it.’”

Not bad for a scholar who’s spent so much of her life among “dead guys.”