Near the end of Disney’s Frozen, Princess Anna gets a dose of relationship advice from the finest love experts in the kingdom of Arendelle.

Arendelle’s love experts are a family of trolls.

Notre Dame’s is a theology professor.

Tim O’Malley ’04, ’06MTS is director of education in the McGrath Institute for Church Life and holds a concurrent appointment in the theology department, but in recent years he’s become known on campus for something else entirely — his expertise on love, dating and marriage.

Since fall 2016, he has taught THEO 20425 – The Nuptial Mystery: Divine Love and Human Salvation, a course that examines the history of Christian marriage and the challenges it faces today. The class has gained a sort of cult popularity in its short history, growing to the point where O’Malley now caps the class size at 150. You could attribute this to many things — the fact that it fulfills a University theology requirement, the accessibility of the subject matter compared to denser courses on individual theologians — but its instructor says much of the course’s lore comes from one optional piece of homework: Go on a date.

“I think a lot of students actually just call it the dating class,” O’Malley says, “even though it’s an extra-credit, optional assignment.”

There are a few rules for students who opt into the assignment, in addition to a 3- to 4-page paper turned in after the fact. First, it has to be a real date — no “hey, we should hang out sometime.” Second, no phones. And finally, if you’re 21 and looking to drink, you’re to stick to a glass of wine or a cocktail, not, he says, “pregaming with 10 Natty Lights in the quint in Sorin.”

“Some of them have terrible dates,” O’Malley says. “But some of them have really great dates. In fact, it pushes them to say, like, ‘Actually, if I’m going to fall in love with someone, it’s not going to happen magically. It’s going to involve me actually committing to practices where I can fall in love.’ So in that, I’ve seen a lot of their lives changed. Some of them quite literally, because now I’ve taught the course for [several] years, and I’m getting invitations to marriages from this assignment.” 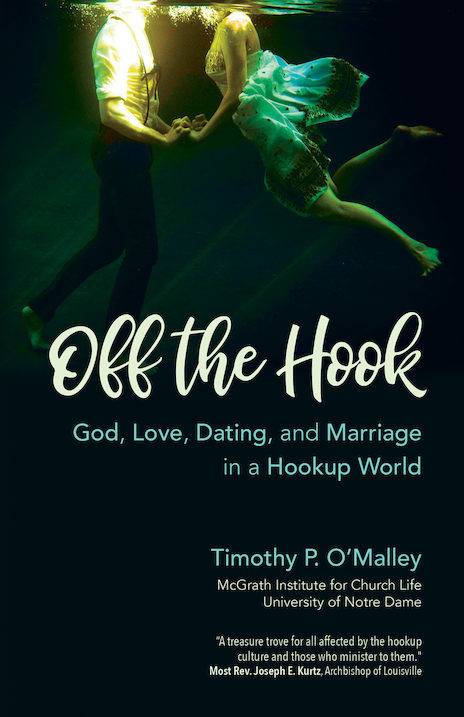 All of this is a fairly radical change from the general state of dating on campus. When we met a few days before Valentine’s Day, I asked O’Malley what he thought the state of “Notre Dating” was these days. His response?

“Notre Dame is a complicated place to date,” he added. “Single-sex housing, and a lot of people who are awkward. But I think one of the things that have changed is smartphones, so, the manner in which, actually, people don’t know how to communicate with one another.”

When relationships are formed and carried out via texts and Snaps, he says, everything is up for interpretation — which leads to a lot of ambiguity.

That ambiguity might sound familiar to anyone who’s encountered the latest trend in college romance: the hookup. Defined on a person-to-person basis as anything from kissing on the dance floor to no-strings-attached sex, hookups have become what O’Malley calls a “cultural script” for American young adults. Even if you aren’t participating in the hookup culture, he says — which, at Catholic schools, evidence suggests that most students are not — it can be hard to escape its pervasive impact on relationships.

Last year, O’Malley waded into the wide world of hookup-culture analysis with a new book grounded in the Catholic tradition. Off the Hook: God, Love, Dating and Marriage in a Hookup World attempts (as the Nuptial Mystery class does) to provide an alternative to the flawed state of modern dating. In the book and the class, the suggested salve is the sacrament of marriage — but not simply because married sex is OK and unmarried sex isn’t.

“I think a lot of people, when they focus on how to fix problems in society, focus on sex. And so they say, like, ‘Well, if we get people to be more pure’ — whatever that means — ‘then there will be this kind of . . . it’ll be fixed.’ But I think one of the problems is, the same attitude of lack of communion, lack of real intimacy can enter into friendships. It can enter into everything.”

Love that centers on true connection, O’Malley says, can turn these societal ills around, whether that love is directed to your friends, your family or your significant other. Marriage, with its connection of the natural (the love of two people) to the supernatural (the love of Christ for the Church), is simply the highest form of that love — and the contractual commitment it comes with doesn’t hurt either.

“There’s something about my relationship with my children, for example: To know that I’m obligated to them actually allows the flourishing of love,” he says. “Rather than just saying, like, ‘Well, actually, I could leave you at any moment. There would be no problem. It’s just dependent on how you make me feel.’”

Reorienting one’s relationships to this committed end can be transformative, particularly for college students who are just learning how to date.

“To me, if we reorder relationships to the point where you think about marriage — not to say the person is reduced to our husband on the first date or our wife on the first date, but to say the end of this is communion and what I long for is a deeper communion — then I think the gift is that it reorders what the hookup is intended for,” he says. “It’s no longer an ambiguity. What you really want is communion. And if that’s the end, then the hookup . . . it’s just not that interesting.”

O’Malley notes that a number of his students, particularly young men, have ended their time in the so-called dating class with an epiphany that they want such a change — even if the reality of lifelong love is less glamorous and sexy than the pursuit.

“The gift of marriage is rather mundane,” he says. “For me, the question of marriage isn’t, ‘Do I want to spend the rest of my life with this person?’ That’s to say the wrong thing, because we’re never guaranteed the rest of our lives with anyone. But the question is, ‘Do I want to enter fully into the human project with this person?’ I want this person to help me take out the trash. Not just today or tomorrow, but ideally 40 years from now.”

As our conversation wrapped up, I asked Tim if he and his wife, Kara ’04, ’06M.A., had any plans for the Valentine’s Day holiday coming up that week. They didn’t.