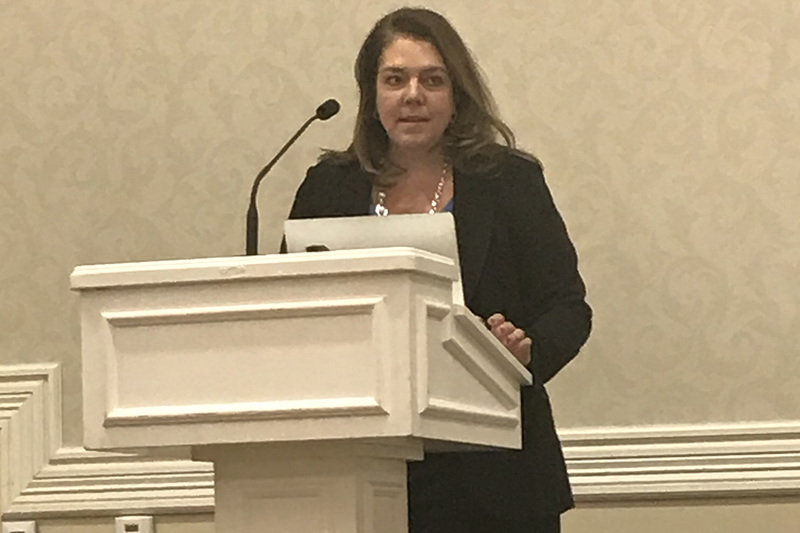 “We cannot allow the Church’s prophetic role in the public square and across the globe to be eroded,” Kerry Alys Robinson says. Photo by Margaret Fosmoe ’85

Responding to the sexual abuse crisis in the Catholic Church requires the active involvement of survivors, the clergy and other religious, as well as lay men and women, according to Kerry Alys Robinson, who has devoted much of her life to the Church.

“Diversity matters. Who is at the tables of decision-making matters,” said Robinson, founding executive director and global ambassador of Leadership Roundtable, an organization dedicated to promoting ethics, accountability and best practices in the Church through lay involvement. “We all need to solve the myopia. We are all myopic, on our own or within our own narrowly defined groups.”

Robinson’s spoke March 4 at the Morris Inn during the first day of a conference, “Called & Co-Responsible: The Mission of the Church,” organized by Notre Dame’s McGrath Institute for Church Life. The conference continues until March 6 and many of the sessions are being livestreamed.

True reform is essential, Robinson said, to prevent young people from leaving the Church and to maintain its moral integrity around the world.

“We cannot afford to lose this generation of Catholics, not under any circumstances,” she said. “We cannot allow the Church’s prophetic role in the public square and across the globe to be eroded.”

In a 2012 speech, Pope Benedict called for a change in the role of laity in the Catholic Church. He said that lay people should be “co-responsible” with the clergy “for the Church’s being and acting.”

Since the first wave of sexual abuse allegations against priests nearly 20 years ago, the issue has grown into a global crisis, said Robinson, who has served for 15 years on the national committee of the U.S. Catholic Conference of Bishops’ Catholic Campaign for Human Development and is a columnist for Chicago Catholic.

Sexual abuse by clergy has expanded to include not just children, but adult victims as well, Robinson noted. “The external culture and impact of the #MeToo movement is certainly a factor,” she said. “If movie moguls, politicians and CEOs no longer get a pass, why should we expect faith leaders to?”

Leadership Roundtable advocates that survivors be part of all deliberations, and remain at the center of the Church’s care and concern. “This is the minimum of what justice demands. Our sisters and brothers have been harmed,” Robinson said. “We owe it to them to offer everything we have to make recompense, and listening to and believing victim survivors is critically important for all of us and it is just.”

Restoring Catholics’ trust will require cultural change based on transparency, accountability, competency and justice, she said.

Among Leadership Roundtable recommendations for moving forward, according to Robinson:

Women must be in meaningful positions of leadership at every level of the Church, and be at the table during decision making about the future, Robinson said. “We need diversity to be good stewards, which is why women's leadership — together with men’s — matters, and no solution moving forward will be complete without the presence and authority of women,” she said.

The conference is one in a series of Notre Dame Forum 2019-2020 events examining the sexual abuse crisis in the Catholic Church and possible reforms.