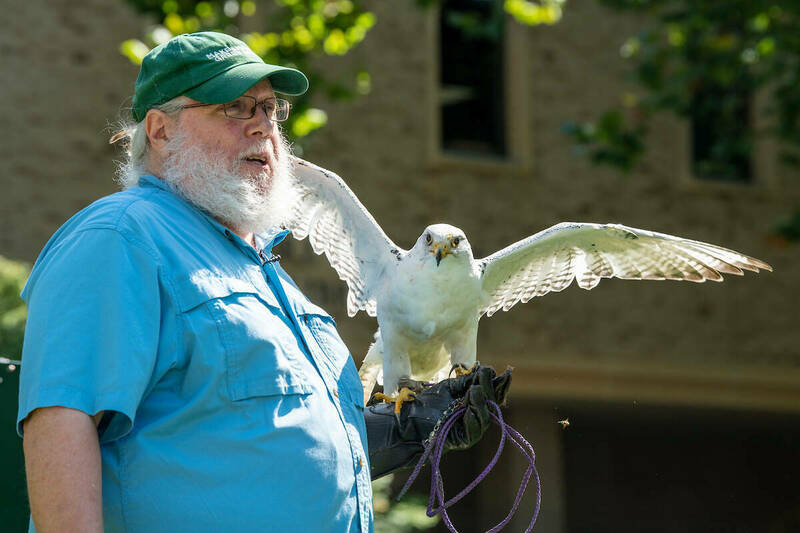 In the shadow of Hesburgh Library, under the Moses statue, Mark Booth held aloft a startlingly white bird of prey. The arctic predator’s feathers were luminous in the midday sun as she ate a chicken morsel the falconer had given her.

“This, my friends,” Booth declared to a rapt football Saturday audience, “is a gyrfalcon. This is the largest species of falcon in the world. This is the bird the king was allowed to fly.”

Elsa, one of several birds Booth displayed September 18 as part of the Medieval Institute’s 75th anniversary commemoration, flicked out black-speckled wings to steady herself on the leather of the falconer’s glove.

Booth could not overemphasize her majesty, or the importance of gyrfalcons in the Middle Ages. “Ransoms would be paid in gold and falcons. Treaties were made with the trading of falcons. It was a really big deal! Various popes and emperors had to make laws saying, ‘Please don’t bring your falcon to church.’”

Falcons, he explained, were used for hunting, or as symbols of power. They featured prominently in epic and Romantic poetry, representing the most dynamic and exciting parts of life.

Booth highlighted how falconry has influenced the English language, giving us words such as “hoodwinked,” after the hoods that blind falcons while they’re not in use; “codger,” after the medieval servant responsible for carrying around a lord’s falcons (and who would likely have all the latest noble gossip); and “hag,” after an old, tired hunting bird that no one wanted. The latter, Booth noted, may be cruel, but the birds could hardly be blamed for it. “Is it nice? No. Is it right? No. Is it history? Definitely.”

No falcons took flight for the anniversary demonstration, but Booth did heighten awareness of the threats facing many species of falcons, hawks and other raptors: Deforestation deprives them of habitats; hunting whittles down their populations; pesticides poison their food. Oil drilling degrades nature preserves.

As Elsa flapped on his arm, enjoying her chicken, he explained the difficulty her species faces as its habitat withers away.

“The peregrine falcon has made a tremendous comeback — how wonderful! But gyrfalcons are never going to nest in a building in downtown Indianapolis and eat pigeons. Gyrfalcons require pristine arctic wilderness.”

Indicating Elsa and her spotless plumage, he declared, “This is what you lose. The greater the biodiversity, the more species that live [in a habitat], the healthier the place is . . . this is why we worry about endangered species. Not because we like them; it’s because we need them.”

Despite the looming environmental peril, falconry is thriving. “There’s actually more falconers now than ever before in history,” Booth said. “Now is the golden age of falconry. Now we’re breeding them in captivity, now we’re flying in birds from other parts of the world because we can . . . now we have GPS!”

And now, unlike the Middle Ages when class excluded many, a man like Booth can devote himself to the discipline. “I’m not rich, I’m not a noble . . . the golden age of falconry is now,” he repeated, the enthusiasm for his work evident in his smile.

Outlining the heritage of the regal birds, and the modern world’s threats to them, Booth advocates for extending the lessons of the past to ensure the preservation of the species and the art of falconry.

“Learn about nature whenever you possibly can, folks, and learn about history,” Booth advised the audience. “Because no matter what you ever do, you’re always a part of both.”

Oscar Noem is a junior at Notre Dame majoring in English and studying in the Gallivan Journalism Program.