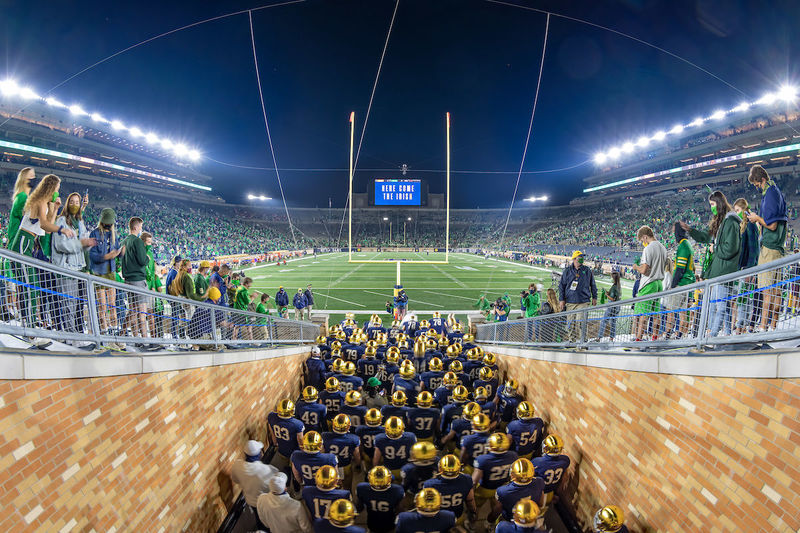 As Notre Dame knocked off then-No. 1 Clemson in a hallmark win further immortalized by thousands of students storming the field, I was one of the only people in Notre Dame Stadium who had to appear neutral.

Over the past two seasons, I’ve gotten used to it. I work home games with Notre Dame Football on NBC as sideline reporter Kathryn Tappen’s assistant, providing an extra set of eyes and acting as her sounding board on the field.

It’s an opportunity I could have only dreamt of when I latched onto Fighting Irish football through those NBC broadcasts more than 10 years ago. Now, some of my favorite memories from my five semesters on campus trace back to that turf, to being a small part of an incredibly polished production.

While some of those memories will eventually fade, I’ll never forget covering the double-overtime thriller that was Notre Dame’s first win over a top-ranked team since 1993.

Every game I work with NBC contains a few “pinch me” moments, but the Clemson game was full of them. I handed Clemson coach Dabo Swinney his headset for pregame and halftime interviews; I stood even with the goal line during Notre Dame’s game-tying fourth-quarter drive; I watched as the wall that normally separates me from my peers vanished when thousands of them hopped over it and swarmed around me.

But as my friends and classmates reveled in a victory worth recounting to future grandkids, Kathryn and I sought an interview. We quickly realized our hopes of reaching Notre Dame coach Brian Kelly were futile (he later pronounced that he’d been the first person to the tunnel), so Kathryn started looking for another subject.

As I helped her search, I spotted my friends and felt a pang of sadness that I wasn’t celebrating with them, but that fleeting disappointment vanished when I heard play-by-play commentator Mike Tirico through my earpiece: “In the midst of the pandemic, there is pandemonium!”

His reference to the students storming the field reminded me how much I enjoy my unique vantage point — a sideline view, with the television call in my ear — even though it meant covering that pandemonium instead of participating in it. Through the chaotic sea of green around me, Notre Dame running back Kyren Williams emerged, and Kathryn signaled to producer Rob Hyland that she had her interview subject.

It was a great interview, Williams doing his best to describe an indescribable feeling before being engulfed by hordes of students asking for pictures: “This is what you come to Notre Dame for — to play games like this.” Then he bounced into the crowd, moving the same way he does on the sidelines, where he always seems to be pacing, jogging or otherwise brimming with excitement.

Noticing sideline habits is a component of my job as Kathryn’s extra set of eyes. I’ve watched Williams’ consistent energy, quarterback Ian Book’s frequent trips to the offensive-line huddle, linebacker Jeremiah Owusu-Koramoah singing along to songs blaring through the speakers to excite the defense when the pandemic-capacity crowd is subdued.

During the Clemson game, I watched Tigers’ star quarterback Trevor Lawrence, sidelined after testing positive for COVID-19, trail his backup D.J. Uiagalelei like a shadow, the mentor following the mentee who shouldered an immense weight in his second collegiate start. I watched Clemson veterans attempt to inject energy into the sideline as they found themselves trailing for the second straight week.

As the double-overtime defensive stand played out, Notre Dame players jumped around while third down stretched into fourth, and then the game ended, 47-40 Fighting Irish. By that point, Kathryn and I stood just yards away, in position for a postgame interview on the winning sideline.

Thanks to what is now a 23-game home win streak, that sideline has been Notre Dame’s for as long as I’ve been a student. But late in the fourth quarter, when it looked like the streak might stall at 22 games, I found myself across the field as Kathryn prepped postgame questions for Swinney.

Then the Irish offense started churning toward us, with Book orchestrating a final drive of lore.

After three first-down pickups, analyst Tony Dungy intoned, “Now you’re going to have to make some chunk plays in the passing game.” As if in response, the next play saw Book sail a throw nearly 40 yards in the air, hitting an open Avery Davis in the chest on a post route and setting up first-and-goal from the 4-yard-line. Two incompletions brought up third-and-goal, when Book rolled out to his right and hit Davis in the endzone to keep Notre Dame’s upset bid alive.

Kathryn and I watched from the Clemson sideline as Jonathan Doerer’s extra point tied the score and listened through our earpieces as Hyland prepared to send the broadcast to overtime.

By then, I knew the game would go down as a classic, but I couldn’t fully appreciate the magnitude until the broadcast was off the air. For the time being, I had a job to do — no matter which team won.

When I finally started to process the win, I thought back to sitting in the upper deck of AT&T Stadium in 2018, watching a then-undefeated Notre Dame team unravel before my eyes. At the time, I was many rows removed from the field. This year, I stood on it.

That Cotton Bowl game followed my first semester at Notre Dame. Since then, the University has provided myriad opportunities to a 20-year-old chasing a lifelong dream of being a sports journalist while simultaneously living out a childhood dream of attending Notre Dame.

At that time, I couldn’t have foreseen such an opportunity. I also couldn’t have imagined the moment would have such significance, a Cotton Bowl rematch and a top-five matchup that would be one of the best college football games in recent history.

But Notre Dame has a way of providing those “pinch me” moments. So, while I always have to be unbiased during my sideline shifts with NBC, it would be impossible to be neutral about Notre Dame.

Caroline Pineda is a junior studying television and journalism. She works with Notre Dame Football on NBC, serves as sports editor for Scholastic and broadcasts with Fighting Irish Media, Notre Dame Television and WVFI radio. She has written for the Associated Press and NBC Sports’ Inside the Irish.