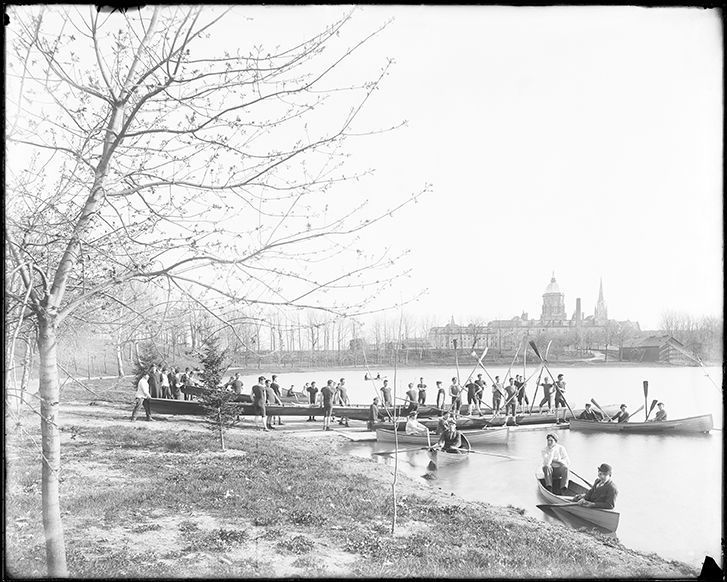 Perhaps you’ve heard of Professor Jerome Green, engineer, one of Notre Dame’s few truly distinguished faculty members at the turn of the 20th century. Hired in 1895, the pioneering scholar of wireless telegraphy figured out how to throw his voice from the building now known as LaFortune Student Center to the University’s flagpole and then all the way from Notre Dame to Saint Mary’s College — the first wireless messages transmitted in the United States.

Likely you’ve never heard of Green’s colleague, William Benitz, hired around the same time. “He was an excellent teacher and popular with the students,” writes Rev. Thomas E. Blantz, CSC, ’57, ’63M.A., in his new book, The University of Notre Dame: A History. Benitz’s “tobacco chewing was legendary and he was said to be able to hit a spittoon at ten feet.” Once, seeing that a student had written “We love our teachers” on a stair riser inside LaFortune, then known as Science Hall, the professor made free to scrawl his reply on the riser above it: “Like Hell you do.”

With that, Benitz takes his bow and exits Blantz’s expertly crafted and comprehensive stage, one of hundreds of characters who help the historian capture all that shaped Notre Dame, from founding president Rev. Edward Sorin’s arrival in 1842 through the 2005 inauguration of Rev. John I. Jenkins, CSC, ’76, ’78M.A. as Sorin’s 16th successor. In 605 pleasant and informative pages, Blantz parses the competing visions and debates, the decisions, risks and initiatives that built the University readers will recognize today, probing and explaining the character, aspirations and seriousness of the institution.

Along the way, Blantz never loses his eye for story, for the lighter moment, the personalities and human interactions that make Notre Dame more than a significant landmark on the skyline of American culture, religion and higher education, but a place that generations of people have loved. We meet Eliza Gillespie, the Mother Mary of Saint Angela whose arrival in the 1850s to lead Saint Mary’s Academy Blantz calls “one of the more fortunate events” in American Catholic history. “Eliza should never marry,” a priest had once told her mother. “I do not know a man who is her mental superior.” A century later, we encounter the influential political scientist Waldemar Gurian, a refugee from Nazi Germany and founder of The Review of Politics who once showed his disdain for the views of a visiting lecturer “by standing up, turning his chair around . . . and reading a book for the rest of the lecture.”

For the author, who taught American history at Notre Dame for 46 years — and led an undergraduate research seminar on Notre Dame history for 10 — the story begins with Sorin’s sincere desire to become American and to create an enduring American institution. With unmistakable roots in the reboot of French Catholicism that followed the disruptions of the French Revolution — and planted during a flare-up of American anti-Catholicism — Notre Dame did that rare thing for a frontier college in the 19th century: It survived.

Easily mythologized, the Sorin we meet here is no mere force of nature. Instead, Blantz portrays the founder and the priest-presidents who followed him as determined, resourceful, limited, interdependent and pragmatic. They were men of widely varying skills and strengths, all of whom were fixed on growth, academic improvement, the intellectual and moral formation of students — and financial solvency — each in his own unique historical moment.

Several get their own chapters. The leadership of Father John W. Cavanaugh, CSC (1905-19), nationally regarded as a brilliant orator, begat a generation of scholarly protégés who would boost the academic reputation of the Congregation of Holy Cross and lead the University through the first half of the 20th century. Father James Burns, CSC (1919-22), weaned Notre Dame off the steady income of its on-campus prep school, more than making up the difference with the University’s first fundraising drive, which collected $1 million. Burns then established a board of lay trustees to oversee the school’s investments. Father JohnJ. Cavanaugh, CSC (1946-52), once the timekeeper at a Michigan sawmill, pushed the introduction of a Great Books program and may even have hoped it would one day “comprise the whole College of Arts and Letters.” Though that never happened, the second Father Cavanaugh modernized the administration, setting the table for Father Theodore Hesburgh, CSC, who over the next 35 years would overshadow them all.

The Hesburgh years, not surprisingly, receive four of the book’s 18 chapters. (The University as led by Rev. Edward “Monk” Malloy ’63, ’67M.A.,’69M.A. gets three.) But while presidents might set the tone for an era, and their once-customary six-year terms make for convenient markers of historical change, Blantz presents a more complex and satisfying narrative with insight drawn in part from his own varied roles across 60-plus years of Notre Dame life. A former student, professor, residence-hall rector, vice president for student affairs, University archivist and history department chair, the self-effacing priest has had the advantage — as a student of his quipped — of living through most of what he was writing about.

Blantz matches that breadth and depth of experience with a writer’s gifts for making the process of creating a germ-free laboratory as intelligible as Knute Rockne’s offensive innovations — and, maybe more importantly, a biographer’s knack for explaining historical change through the contributions of individual people. The resulting portrait is a Notre Dame that might surprise some readers: a place that experimented with programs in mining and industrial engineering, agriculture, medicine and pharmacy; a school where enrollment in commerce and business offerings has almost always outstripped the liberal arts; where as late as 1920 “religion was not required as an academic subject since the whole campus seemed permeated” with it; where a second world war was needed to extend admission to the first Black student, “and that was not by accident.”

Blantz’s work should encourage younger historians to delve deeper into Notre Dame’s difficult history with racial justice. He points to other intriguing projects, too: the work of the Holy Cross Brothers and Sisters, “the important presidency of Father Thomas Walsh” (1881-93), the Notre Dame farm. One hopes such stories are told with the same meticulous research, patient judgment, earned wisdom and human warmth.