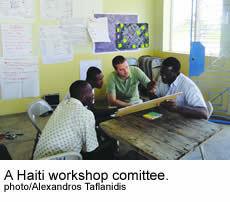 In their 18-year fight against the pain, disfigurement and injustice caused by lymphatic filariasis, Father Tom Streit, CSC, and his bi-national team in the Notre Dame Haiti Program have grounded their scientific research and medical work in a consistent message: We are here for you. We are one with you. We will not stop until this scourge is gone. We will not lose hope.

The January 2010 earthquake in Haiti threatened all that. For months, disaster relief in the program’s host community, Léogâne, eclipsed the effort to eradicate the tenacious tropical parasitic disease.

Eighteen months later, the program and its partners have regrouped, working through the setbacks to push forward on mass drug administrations and the distribution of table salt fortified with iodine and antiparasitic medicine around Léogâne and beyond.

Meanwhile, many thousands in Léogâne still live without adequate shelter. Schools, businesses and medical facilities are either closed or operating on a limited basis. Now the Haiti Program’s credibility is making it a conduit for other kinds of help. In March, nearly 200 residents convened for the Rebuild Léogâne Planning Workshop, conceived as an opportunity for emerging local leaders to share their vision with Notre Dame specialists and partners from academia, the private sector and international nongovernmental organizations (NGOs).

Months of dialogue between Haitian and American coordinators in each of eight focus-area committees preceded the workshop, which took place at the Haiti Program’s guesthouse and next door at the Episcopal University of Haiti’s nursing school. Participants described the four-day meetings, conducted in English and Creole, as grassroots-driven and intense. That already was an accomplishment, says Father Bob Loughery, CSC, ’78, ’88M.Div., a workshop organizer.

Loughery says women, many of whom run small businesses, turned out in almost the same numbers as men. Breakout sessions covered quality-of-life needs from housing, infrastructure, public services and zoning to cultural promotion, economic development, education and healthcare. “The first thing that surprised me is that people came back for the closing session,” Loughery says. “They’re not passive. They’re invested.”

The immediate goal is the production of a master plan that translates local wishes into orderly, detailed proposals which could unlock the billions of dollars in foreign aid and development capital that accrued after the earthquake, all with Haiti’s name on it. The problem is that right now “people are very hesitant to put the money into Haiti,” says Gilbert Wirth, a Virginia developer whose involvement in the country goes back almost as far as Father Streit’s. “They have to have a plan in place before they’re willing to commit the dollars necessary.”

Wirth, whose son attends Notre Dame, met Streit ’80, ’85M.Div., ’94Ph.D. several years ago. He became part of the team advising the salt program and visited Léogâne several times before and after the earthquake. “No one was even thinking in terms of comprehensive master planning for the town of Léogâne,” Wirth recalls. “And I said, well, guys, this is what I do for a living.”

Wirth said the intention is not to turn Notre Dame into an overseas land developer, or even to tell people what to do, but simply to listen and offer expertise. “This is what the University does best: Bring people together for the facilitation of ideas,” he says.

One invaluable resource is anthropologist Karen Richman, the director of migration and border studies at Notre Dame’s Institute for Latino Studies. An authority on Haitian culture, language and economics, Professor Richman says the earthquake set Léogâne’s families back decades. With no savings or insurance of any kind, they turned to the only safety net they have — relatives and friends.

Richman’s insights oriented several American participants and shaped sessions on culture and economic development. She stresses Haitians’ understanding of interdependence within extended families and their sense of success as something measured not by individuals but groups.

She also warns of Haitian antipathy toward wage labor. The best thing to come out of the workshop, she said before it began, “would be to help empower the Haitians to solve their own problems. And it’s really going to take a realistic understanding of the situation.”

In fact, while several NGOs have already produced plans for Léogâne, the Rebuild workshop was the first to try to coordinate them and invite residents’ participation. NGO representatives attended, making organizers optimistic about sustained cooperation.

Pre-workshop meetings had prioritized chronic flooding, sewage and water supply. Father Loughery says deforestation in the mountains around Léogâne — a major factor in city floods — prompted talk at the workshop about energy alternatives and the planting of fruit groves to prevent erosion and generate income. Soon the focus shifted to education and healthcare. And an unexpected means of organizing potential solutions to the tangle of problems emerged: rara.

Léogâne is the home of this Haitian street music, most visible each Lent in processions — much like the krewes of New Orleans’ Mardi Gras — that culminate in a downtown festival at Easter. The parades are organized by the 37 villages and neighborhoods that make up the Léogâne area. Their gathering points may mark natural locations for the sites of new schools, markets, health dispensaries, water supplies and energy nodes. Parade routes map out important corridors for commerce, transportation and tourism. And promoting rara may raise the profile of a city that once enjoyed prominence in Haitian culture — a boost for civic pride and Léogâne’s other arts.

Loughery says Haitian working groups meet once a week to continue the conversation and consult with their volunteer experts as they craft the workshop’s preliminary report into a unified master plan. In the hammering out of these details lies hope.