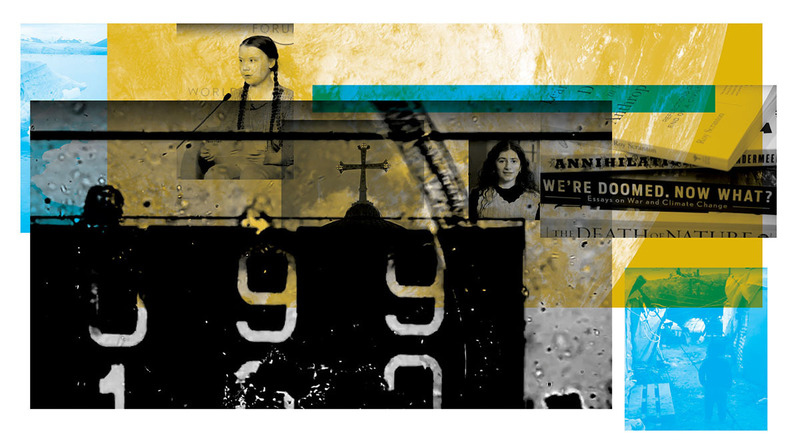 Professor Roy Scranton asks for a student volunteer to recite William Wordsworth’s “The World Is Too Much with Us” (1802). Then another to read Robinson Jeffers’ “Carmel Point” (1954).

Wordsworth laments humanity as “out of tune” with the power and beauty bequeathed to us: “Getting and spending, we lay waste our powers; — / Little we see in Nature that is ours . . .”

Jeffers decries “this beautiful place defaced with a crop of suburban houses,” a symbol of the transient futility of human endeavors against nature’s supremacy and permanence: “We must uncenter our minds from ourselves; / We must unhumanize our views a little . . .”

Students pair up to analyze what the poets say about the human relationship to nature. In both they find paradoxes and complexities in the understanding of our existence as a part of — and apart from — the natural environment. Literature and philosophy, spanning diverse global traditions and epochs of human thought, grapple with these ideas. During the semester, Scranton’s students will read from the Book of Genesis and ponder Jeff VanderMeer’s 2014 novel Annihilation. St. Francis and Pope Francis. Ralph Waldo Emerson, Aldo Leopold and Barry Lopez ’66, ’68M.A., among many others.

In the first minutes of the first class, they attempt to tease out relevant themes in Wordsworth and Jeffers. Scranton amplifies their ideas.

“People are temporary, and nature will win out in the end, regardless of what humans do,” one student offers.

“In both poems, nature is something out there,” Scranton says, “much more powerful than humans.”

Wordsworth was writing during the Industrial Revolution, which triggered an increase in the carbon emissions that have warmed the atmosphere to a dangerous degree; Jeffers during the post-World War II period that has marked an exponential hastening of human impact on the environment.

Scranton cites data from The Great Acceleration, a 2016 book by historians J.R. McNeill and Peter Engelke: Three-quarters of human-generated atmospheric carbon dioxide has been emitted in the past three generations; since the mid-20th century the number of cars has increased from 40 million to 850 million and annual plastic production from 1 million to more than 300 million tons. “Certainly the most anomalous and unrepresentative period of the 200,000-year-long history of relations between our species and the biosphere,” Scranton says, reading a passage from McNeill and Engelke projected on the classroom screens. Such is the environmental inheritance of a generation represented by 30 students in this Geddes Hall lecture room.

Scranton’s course is called Witnessing Climate Change, developed as part of his fellowship with the Notre Dame Institute for Advanced Study. It coalesces his scholarship and interest in fostering “conversations about climate change that didn’t focus on the science, that didn’t focus on policy, but rather focused on questions of value and meaning,” he says. “How do we make sense of this thing that’s happening to us?”

Scranton, the founding director of Notre Dame’s Environmental Humanities Initiative, has ruminated in books and essays on the questions that animate the course — the word “witnessing” in its title chosen with precise intention: “Meaning both seeing and understanding what’s happening, and testifying and talking about it,” Scranton says. “That metaphor of witnessing has become core to my conception of the course.”

Planned session by session in meticulous detail, Witnessing Climate Change builds toward a 3,000 to 6,000-word creative nonfiction essay. To inform those student projects, the coursework, lectures and discussions prompt consideration of “relationships between nature, place and identity” and “ethical and spiritual problems posed by climate change.”

Works like Elizabeth Bishop’s poem ‘At the Fishhouses’ and Pope Francis’ encyclical Laudato Si’ give nature — and the human responsibility to respect its life-sustaining and life-threatening power — a vivid immediacy.

Students spend a September class dispersed around the campus lakes in silent contemplation. For seven minutes, they take in their setting as a whole, noting how different aspects of nature interrelate and how nature interrelates with the human world. Another seven minutes focuses on one aspect of the natural world — a leaf, a duck, a ripple in the lake. They close their eyes as they tune into the sounds and scents around them, the feel and flavor of the air. Then they go back to a full sensory experience of their surroundings, followed by a written reflection and discussion of their observations.

Near Carroll Hall on the southwest side of St. Mary’s Lake, the hum of traffic along Indiana 933 is constant. Even in this most bucolic corner of campus, it’s hard to avoid evidence of human industry — an electric scooter leaning against a tree, a roaring lawnmower, a pair of shoes thrown over a branch.

Students and teacher, seated in a circle between Carroll and the lake amid the honk and screech and trill of unseen birds, discuss what they’ve seen, heard and felt.

“My gaze was either looking down, or we all kind of gravitated toward the water,” one student says. “Once you’re looking down long enough, you get curious enough to start looking up. And then once I started looking up, I couldn’t stop looking at trees.”

“Is there anything in particular you noticed in the trees?” Scranton asks.

“How intertwined it all is. I was following a squirrel. ‘Wow, this is not that big a tree, how am I losing the squirrel?’ after it climbed higher and higher. And then, when you lose the squirrel, you’re just looking at a tree, and you’re seeing the branches and the leaves. Beautiful.”

Another hand goes up: “Something that I noticed was that there’s a really slight breeze in the air today, and I hadn’t noticed that before. As soon as I opened my eyes again, I noticed that the plants were swaying and there’s a very slight rippling of the water. . . . Those are things that I didn’t notice before because I was too focused on my vision.”

“Attention to those other forms of sensory input to help us see the subtler micropatterns that are there,” Scranton affirms. “Visually, we just don’t notice them because we’re not attending to them.”

Lauren Amrol, a junior studying economics and sustainability, notes the “doom and gloom” the course documents in detail. Engaging with those realities from a humanities perspective, she says, provides new ways to think about human life and the natural world as complementary, rather than competing, forces. Works like Elizabeth Bishop’s poem “At the Fishhouses” and Pope Francis’ encyclical Laudato Si’ give nature — and the human responsibility to respect its life-sustaining and life-threatening power — a vivid immediacy.

“That’s been one of my biggest takeaways,” Amrol says, “just learning how we can listen to nature more and try to incorporate nature more into decision making so that we’re not working against it, we’re working with it.”

Ian Fry, a United Nations expert in international environmental law, has spoken of an “intolerable tide” of climate-related displacement, with disproportionate risk falling on vulnerable populations. According to the International Refugee Assistance Project, since 2008 environmental disasters have displaced more than three times as many people as has armed conflict.

Today the global population numbers more than 8 billion. According to a 2020 study, as many as 3 billion people now live in places that could become too hot for human habitation within 50 years if current climate trends continue. The Sydney, Australia-based Institute for Economics and Peace projects more than 1 billion climate refugees by 2050, with extreme water stress affecting as many as 5.4 billion people worldwide and more than 3.5 billion facing food insecurity. Rising sea levels will only add to the displacement.

“New projections show high tides subsuming much of Vietnam by 2050 — including most of the Mekong Delta, now home to 18 million people — as well as parts of China and Thailand, most of southern Iraq and nearly all of the Nile Delta, Egypt’s breadbasket,” ProPublica and The New York Times Magazine reported in a 2020 collaboration. “Many coastal regions of the United States are also at risk.”

Such dire predictions have become familiar. And some current effects of climate change — such as the thawing of Greenland’s largest ice sheet — have happened faster than previous estimates predicted. Yet international efforts lack the scale or urgency to maintain manageable global temperature rise or to mitigate the disruptions that could lead to mass migration, hunger and conflict over scarce resources.

Notre Dame biologists Jason McLachlan and Jennifer Tank visited Witnessing Climate Change to help the students understand the data and wrestle with how to communicate effectively to an often skeptical and apathetic public. There’s a tension in scientific communication between reporting data in all its complexity and interpreting that information to characterize the state of the world and inspire action. Stephen Schneider, the late Stanford University climate scientist, defined the conundrum as a “double ethical bind . . . between being an effective agent for change and being honest about the limitations of the state of knowledge.”

Many recipients of the information, however carefully it’s presented, are reluctant to accept it — itself a natural human response. As the Nobel Prize-winning economist Daniel Kahneman put it, “What people believe about global warming doesn’t reflect what they know, it reflects who they are.”

In Witnessing Climate Change, students must confront those challenges. Their ideas impress Scranton with their breadth and ambition. Topics for their creative nonfiction projects include sustainable aviation fuel, industrial agriculture, environmental activism at music festivals, and the impact of climate change on the Great Lakes. One weaves together water, Thomas Merton and hiking in Patagonia into a single essay.

“Some students are more focused on finding the ray of hope or investigating technical solutions,” he says. “Other students are taken into a more complicated spiritual place and try to figure out how they can understand their faith and their connection to Catholic teachings in light of this global crisis.”

They draw on journalistic reporting, scientific research, theological and philosophical thought, artistic expression and personal experience to deepen their understanding of who they are — and to deliberate what it means to be human — on a planet in perilous flux.