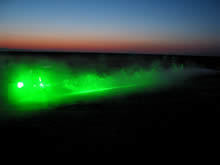 The sight was eerie, no doubt. In the dead of night last summer in the middle of Utah’s Great Salt Lake Desert, a theatrical fog machine pumped out a steady stream of white smoke while technicians zapped it with green laser light and videotaped the swirls and eddies. What may have looked like special-effects filming for a science-fiction movie was in truth an experiment to determine science fact. Specifically it was to understand high-speed air turbulence, which is of interest to airplane designers, among others.

High-speed air turbulence is difficult to study, Notre Dame Assistant Professor of Aerospace Engineering Scott Morris explains, because the faster the air flows the more the boundary area of turbulence shrinks in height. In traditional lab wind tunnels, that region of turbulence can be minuscule. But if you had a very, very large wind tunnel, the region would be proportionally larger and easier to analyze. Slower speeds of flow could simulate high-speed turbulence.

That in a nutshell is why Morris and his research team have traveled to the U.S. government’s Dugway Proving Ground in the Utah desert for the past several summers. “This particular site west of Salt Lake City is a unique environment,” he says. “It is a remarkably smooth area, said to be one of the few places on Earth where you can actually see the curvature of the planet on land. It’s nestled in between two mountain ranges, and in the summer each evening a breeze comes out of the north, creating a huge wind tunnel.”

Last summer’s experiment confirmed a long-standing theory, previously observed only in the lab, that swirls of turbulence are organized in wedge shapes, like tiny ramps near the surface. “What we’ve proven is that in nature, you see these ramp structures all of the time,” Morris says.