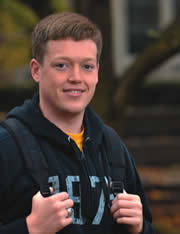 John Busch is concerned with the words “is” and “ought.” Under the tutelage of Professor Dan Lindley, who considers Busch one of the best political science students he has ever taught at Notre Dame, the senior is working on an ambitious independent research project of his own design that attempts in some degree to reconcile the two main schools of thought in international theory.

Last spring the ND undergraduate was much immersed in the real world, however, studying Middle Eastern culture and politics in Egypt at the American University in Cairo, as well as teaching intermediate English to Egyptian public university students.

The experience was invaluable. “It’s one thing to read about good governance and police states and another to walk down the street and see the effects,” he notes.

Growing up in a military family on Air Force bases in South Korea and the United States, Busch, who is the oldest of seven children, says he has long been interested in international politics. “When there’s the possibility your father could be sent off to war, you pay attention to that stuff,” he says. After a family friend was killed in the 9/11 attack on the Pentagon his interest intensified, eventually playing a part in his decision to major in political science and Arabic studies at Notre Dame. “It’s not something I dwell on every day, but perhaps more than the average person it’s shaped the direction [of my education].”

After graduation, the Fisher Hall residence assistant, who plays bassoon in ND’s concert band and orchestra, hopes to work in the Middle East either for a government agency or a firm. “My goal is to learn more Arabic, to immerse myself.” After that real world experience he envisions working on a doctorate in political science, likely concentrating on Middle Eastern international relations and security issues.

John Monczunsk is an associate editor of this magazine.