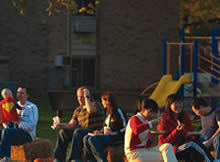 Then one day you’re 22 and you’ve graduated from college, and suddenly the whole question of what your generation is about and how you’re unique matters less. Your options have mulled on the stove of senior thesis projects and mock job interviews, fleeting embarrassments and firm accomplishments, humbling pleas for letters of recommendation and late-night soul baring with beloved confidants. The moment has come to pour out a glass and see how it tastes.

Time passes, life changes. You find yourself living on the fringe of a Catholic city-state first envisioned decades ago as a frontier proving ground for schoolboys and undergraduate men. It has changed with the times, of course — first pushing, now leaping outward brick by lectern by microscope, and over the years welcoming non-Catholics in greater numbers and, finally, women. These days the place’s grand ambitions resemble your own.

You’re here to prepare to make an original contribution to your field. Period.

The pressure, the expectations, the demands don’t come from outside anymore nearly so much as from within. You worry about your academic performance, your research and your relationships — above all the one you’re struggling to build with your faculty adviser. You worry whether you’ll get a job. You wonder whether you shouldn’t already be out making money. The whole idea of getting sick makes you nervous, because what then?

You cook for yourself and you wash your own dishes. When you crave community, you look around your academic department. Residence halls are little more than obstacles between parking lot and campus workspace. If you have a workspace.

You go to game-watch parties when the team’s on the road, and you tailgate and then yell your lungs out in the stands with every home-game touchdown. This is one way, maybe the best way, to bond with peers and release the stress. To feel part of “the family.”

You are a graduate student at the University of Notre Dame. This is your Notre Dame experience. If you’re anything like most of your peers, you hate it sometimes, just a little. Mostly, though, you love it.

John Schmitz knows the stereotypes. Now in his fourth year as a doctoral candidate in aerospace engineering, Schmitz crosses paths with undergraduates as an instructor and research mentor. “Generally speaking, I’d say it’s a good relationship,” he muses. “We joke around and say . . . undergraduates can’t get up before noon. They’re always sick. They don’t like to work. They don’t like to get dirty. And, uh, graduate students are boring and sit around in front of their computers all day and are all hunched over and creepy.”

The truth behind the jokes is that while ND’s graduate, law and master’s level business students (the administration uses the descriptive mouthful “post-baccalaureate” to talk about them all at once) walk the same landscape and hallways as the undergraduates, the gaps between them are palpable and enormous.

“I think there’s actually a transition,” says Caitlyn Shea, a doctoral student in civil engineering. “When I first got here and I was taking a lot of courses, I probably identified more with the undergraduates. But now I’m in my fifth year and I’m preparing job applications for academia. I’m more in a mindset of how I develop my own research program and the courses I want to teach. . . . The whole point of graduate school is training to do those things and to identify as a faculty member.”

If there’s a simple formula for the distinction between Irish undergrads and the TAs and law students just a few years their senior, political science grad student Rebecca McCumbers offers this: “Our frame of reference is professional and not necessarily social.”

The opportunities these students have to make the transition are important: Post-baccalaureate study at Notre Dame is growing. In the last 20 years, undergraduate numbers have nudged upward 10 percent to just over 8,000, where the University expects them to stay. The population of graduate-level students shot up 46 percent to nearly 3,300 during the same period. Projections indicate an additional 700 by 2018.

To understand the ambitious development, it helps to remember the history. University records show that Notre Dame awarded its first two graduate degrees in 1859, but no proper graduate course was announced until 1874, five years after the Law School opened. Formal requirements for graduate study didn’t appear until 1924, when elementary-school-age “minims” in woolen pants still roamed the campus. Another 30 years passed before ND produced its first MBA.
Thus, Notre Dame didn’t really catch up with the “University” title Father Sorin had outrageously claimed for it while thawing out his feet in 1842 until the era of Hesburgh and Malloy. The school is getting there. As Tam Chantem, president of the Graduate Student Union, puts it, when you hear research news coming out of Notre Dame, “there’s probably a grad student involved.”

“You can’t get beyond the fact that Notre Dame is still growing its graduate school, and there are still elements of it being a small, liberal arts, all-male Catholic college in the Midwest,” says Nathan Elliot ’99, rector of the married student housing complex, University Village. “A lot of that has been shed, but there are still pieces here and there. And so, how do you deal with graduate students?”

No one needed a survey to persuade them that graduate students are a more complex bunch than undergrads, by virtue of things like age and life experience and what they hope to get out of their Notre Dame education. For one thing, doctoral students average 6.1 years at ND and many complete their studies while living in the area and starting a family. Most business students, by contrast, wrap up and leave after two.

Administrators knew there were gaps between ND services and the needs of this diverse community of adults. Students had voiced serious concerns about health insurance, campus housing and their readiness to enter the work force. So, in 2006, the University embarked on what one official called a “long overdue” survey of post-baccalaureate students.

The numerical portrait offered some helpful demographics. The largest age cohort is 25 to 27, with about a fifth over 30. Three in 10 are married; one in 10 has at least one child. Two-thirds are white and roughly a fifth are international. Men outnumber women nearly two to one. Seventy percent live off campus. Almost half are Catholic, and 40 percent said Catholic identity was an important part of their decision to pursue their studies here.

The survey also confirmed the complaints, although four out of five post-baccalaureate students said they were somewhat or very satisfied with their experience at Notre Dame.

Sister Susan Dunn, O.P., one of the student affairs officers tasked with addressing these needs, says the feedback prompted some swift changes. The Graduate School, which oversees everyone except the law and business students, increased its subsidy for individual medical insurance while the University hunts for a better family policy. An architectural firm will audit graduate housing options and create a master plan. The Student Activities Office has strengthened its outreach and now brings together student organization leaders to help them forge connections.

On the spiritual side, the University launched “conversation dinners” for students who want to know more about Notre Dame’s Catholic character. A Holy Cross priest moved in to the Fischer O’Hara-Grace graduate housing complex to serve as chaplain. And Campus Ministry designed retreats to fit the schedules of graduate students and spouses.

University Village is a quadrangle of three-story buildings connected by an unadorned chain-link fence. Racks smothered with bicycles stand outside glass entryways where strollers and children’s plastic push mowers compete for parking. Playground equipment dots the enclosed courtyard, and a community garden awaits the enthusiastic husbandry of students who remain in South Bend over the summer.

The Village was built in 1962 to replace the old, postwar Vetville community. Its 500- and 1,000-square foot units are home to 79 families and 92 children, “about half under the age of 2,” rector Elliot reports. The largest of these families has five kids. “A lot of people who come here do wind up staying” — for the community, he adds emphatically. “It’s certainly not for the luxurious accommodations.”

Elliot estimates that half the families are foreign nationals for whom community is especially important. Visa restrictions bar some spouses from working. Many find it difficult even to get a driver’s license. The isolation they might feel elsewhere is softened by neighbors who share their circumstances.

When a baby is born, Elliot and his staff organize meals for the family. He tells stories about his daughter playing with the children of families from Indonesia, Argentina, Egypt and Haiti. He remembers one early spring day when he and his wife, Katie, who is studying for her master’s of divinity, emerged with their neighbors and laughed when they realized that everyone knew the cries of each other’s children, audible through the thin floors and walls. While kids play on such afternoons, their parents talk about life back home and holiday traditions, gardening secrets and food, and share the names of good pediatricians. Life stuff.

They also toss in a pinch of what they think about when they’re working at that yellow-bricked home away from home on the other side of Douglas Road. John Schmitz, the quality of life committee chairman for the Graduate Student Union, says Notre Dame is a place where graduate students don’t need to put their lives on hold while they build their brains. He tells stories about introducing international peers to the concept of the tailgater, playing beach volleyball in downtown South Bend and organizing a bicycle repair clinic. He reassures his adviser that the extracurriculars help him better manage his own project: The $1 million-plus turbo machine lab he built — no exaggeration — in the University’s Wind Tunnel Building as part of his cutting-edge turbine research that will lead to lighter, more efficient jet engines.

Schmitz chose Notre Dame over another top engineering school because he didn’t want the life he observed there. “I wanted a community feel where you knew other grad students and hung out outside of the lab. When I came here and toured around, that’s the feeling I got.”

Of course, the full-tuition-plus-stipend package extended to all ND grad students didn’t hurt. It’s a major distinction between graduate students and the law and business students, who have to pay their own way. But Sister Sue Dunn emphasizes what the groups share. “I would say that they want to make a contribution to their field of study but also to the rest of the students. And I think in that sense, they also represent the best of Notre Dame.”