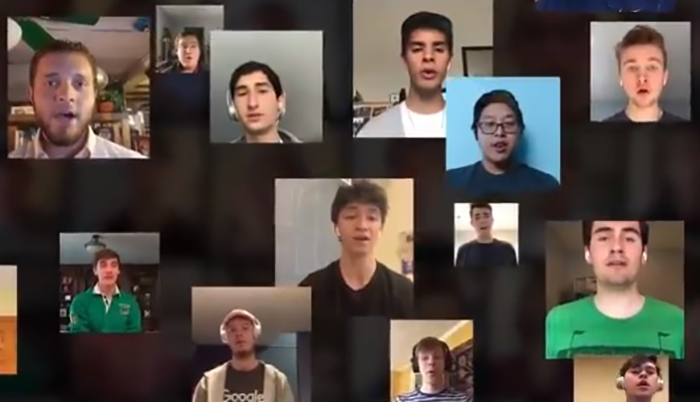 Glee Club members sing together even while apart. See their video rendition of "Notre Dame, Our Mother" below.

I think I scoffed when I saw the text.

It was from my dad, sent on February 28: “Still planning the tour? Wondering whether coronavirus might disrupt plans.”

From my room in Alumni Hall, the situation around the globe didn’t seem very disruptive. Countries in Europe had fewer than 100 cases, except for Italy which still had fewer than 1,000. America had no deaths yet and flights still hopped back and forth between continents. Pawtucket, Rhode Island, planned to hold its annual St. Patrick’s Day festivities even after a group of high school students there contracted the virus on a school trip to Italy.

Besides, tour was tour. The Notre Dame Glee Club has toured since shortly after its founding in 1915. This spring break, the plan was a seven-city tour of the southern United States. We welcomed the promise of warmer weather and sunnier skies, even if some of us grumbled about the challenging program our conductor had selected. As the March 7 departure date inched closer, the focus remained on preparing the music for our first performance the following night in New Orleans.

By the time we finished the concert at St. Louis Cathedral and began to scour the French Quarter for a bite to eat (and maybe a sip to drink), the Centers for Disease Control and Prevention published guidelines for colleges. The document advised administrators to “consider postponing or canceling student international travel programs” and that “dismissal and event cancelation decisions should be considered on a case-by-case basis using information from health officials about the local conditions.”

At 10 a.m. on March 9, our tour bus rolled onto Interstate 10, over Lake Pontchartrain toward Mobile, Alabama. It was sunny and a stop at a beach en route left me burnt to a crisp. The effects of my sunburn were easily visible, but my comrades and I, fresh from exploring the wonder and filth that is New Orleans, started to think about what sort of invisible things we might have picked up in the Crescent City.

That night we stayed in private homes, our customary tour lodging arrangements. We could never thank the people who open their homes to us enough for their hospitality. But the majority of hosts also belong to a particular demographic: retired folks with empty homes, typically north of age 70. In other words, people considered most at-risk if they contract the coronavirus. It seems incredulous now, but the messaging surrounding the virus at the time didn’t make me feel like we were endangering our hosts by shaking their hands, riding in their cars and spending the night in their homes.

Tuesday, March 10 was one of those days you never want to have on tour. Our concert that night was in Atlanta, a five-hour drive from Mobile — or it would have been five hours without the rush-hour traffic we’d be dealing with at the end of our journey. Although the itinerary called for “Free time in Atlanta Museum District,” it turned into a full day on the bus.

Everything looked static out the window as we rode along, but our phones alerted us to the rapidly changing world. “Universities Cancel Classes and Move Online Amid Coronavirus Fears,” read a headline in the New York Times. Updates came from friends and acquaintances: Harvard, Columbia, Syracuse all sent their kids home. I noticed that Vanderbilt — located at our tour’s terminus in Nashville — had done the same the day before. Every time I looked at my phone, a new school joined the list. Some of us tried to make light of the situation, but we soon realized that the jokes just weren't funny anymore — it was really happening.

It felt good to arrive in Atlanta and unload our luggage at the concert site. Over a dinner of salad, chicken and beans, all we could talk about was the news that two Indiana schools, Purdue and IU, had sent their students home.

“My brother’s at Purdue!” exclaimed one Glee Club member. He stepped out of the room to make a phone call.

That night I stayed with two seniors at a younger couple’s house. While we weren’t as concerned about spreading the virus to a vulnerable demographic, our phones and conversations were buzzing with questions of how Notre Dame would respond to the growing outbreak. A rumor, supposedly confirmed by a football coach’s daughter, said that in-person classes would be canceled until after Easter.

The three of us sat around our host’s basement and wondered aloud what the future could hold. My head swarmed with “what abouts?” What about the two concerts we’re supposed to perform between now and Easter? What about the interviews I’m supposed to conduct in person next week? What about the dinners, rehearsals and late-night conversations that will be put on hold?

One “what about?” I didn’t ponder was the tour. It never occurred to me that our trip would be abridged. I didn’t think about the danger we might be posing to our hosts and our audiences. I didn’t think about how 50 guys packed on a bus might not be great social distancing, a phrase still being integrated into the American vocabulary as we arrived March 11 in Greenville, South Carolina.

The mood was tense. Word on the bus was that an email from Father Jenkins would drop at noon. In an unlikely occurrence, a student rumor about Notre Dame’s administration came true, and a commotion ensued shortly before we arrived at a lunch hosted by the local Notre Dame club. Frantic questions, soothing announcements from the group’s officers and plenty of jokes trying to make light of the situation.

Even though we tried to put on a bright face for our lunch hosts, all eyes fixed on our conductor as he walked in and shook hands with some of the alumni. Then he addressed the guys: “I’ve checked with the Student Activities Office,” he said, “and we’re free to continue the tour.”

The room erupted in applause as guys laughed and smiled, thankful for a touch of normalcy while the world grew stranger by the hour. But the more I talked to members, the more it seemed like it might not be the best decision to keep touring.

“Think about the people who come to our concerts,” someone told me. “They’re the exact demographic of people the CDC is telling to stay home.”

“The email said all events gathering large numbers of people should be canceled,” another considered. “That’s exactly what our concerts are.”

I conceded the points, but I supported the decision to stay on tour. This could be our last chance to be with the seniors, I reasoned, and why not enjoy the performances before we were banished to our homes to take classes online?

Something else also bugged me. As the world started to withdraw from social interaction, I felt the Glee Club offered something worth preserving, worth gathering for, even amid the CDC-suggested precautions. To me, the tour was not just a fun way to spend spring break, but an honest effort to bring beautiful music to a national audience. That was my motivation behind singing every concert. Why shouldn’t that be a good motivation to remain on tour?

The next 24 hours were an anxious blur. We had a great concert and lovely hosts, but the news grew more urgent. President Trump announced a travel ban from continental Europe for non-Americans. Disney World closed. Tom Hanks was diagnosed. The situation mounted to an unnerving level and I couldn’t think about anything else March 12 as I boarded our bus to Asheville, North Carolina.

That day, the group dynamics grew slightly more contentious. Arguments for both sides increased in urgency. A handful of guys who wanted to discontinue the tour approached the officers and made their case. The officers called a meeting, prompting an anonymous vote by the whole Glee Club. The result, by a significant margin, favored ending the tour after the Asheville concert.

We all knew, in an unspoken way, that this performance would be how we left it.

The Glee Club’s final concert for seniors is bathed in tradition and sentimentality, except it now would take place on a dreary March day in North Carolina. I seldom cry, but I expected to lose it that night when I sang the alma mater with my best friend for the last time. As it turned out, I wasn’t the only one who would do so.

During an announcement at the concert, an older man sitting near the front raised his hand. The members doing the announcement were caught off-guard, but welcomed the man to speak. He rose and spoke slowly in a strong voice:

There was a brief moment of silence, then the audience started to applaud. It was hard to tell who they were applauding for. The man? Us? Should we also applaud?

The concert continued and, yes, I cried. A lot. And as the tears streamed down my cheeks and I choked out the words I’d sung with half a thought thousands of times, I tried to convince myself that it was just the emotions of saying farewell to some of my closest brothers. But I don’t think it’s that simple.

I wouldn’t have cried if I was simply saying goodbye to my friends. The music needed to be there. Only a tune, in this case written by early Glee Club director Joseph Casasanta, could have elicited such emotions from my soul, just like it had moved the man in the first couple rows. That is what sanctified the moment, the invisible music echoing around us. That is the gift we bring to our audience. That is the point of the performing arts.

As concertgoers slowly departed the church, they thanked us, staring into our tear-streaked eyes. They were trying to express the transcendence they had felt. We had felt it too.

Back home in Vermont, I feel a tinge of embarrassment for my reaction. The isolation we live in now distances us from moments of intimacy like sharing that invisible music. It was the right decision to end the tour. Some might argue that even continuing it to the extent we did was irresponsible. I offer in response only that the ecstasy of those moments, when beauty shocks like a lightning bolt, overwhelms reason.

As we fight the spread of this disease, we must also keep in balance what we are fighting for. Stay at home, do everything you can to mitigate the outbreak, but don’t forget to cherish every spark of beauty you encounter.

You never know how you’ll leave it.

Glee Club member Jack Lyons, a junior studying theology and journalism, is an intern for this magazine (now reporting remotely from his home in Vermont).