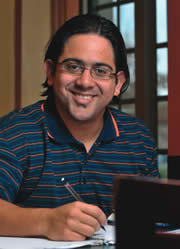 If you were to ask Yamil Colon to name his favorite place on campus, his answer would likely be a tie between the LaFortune ballroom and Professor Joan Brennecke’s lab in Fitzgerald Hall. The chemical engineering student from Bayamón, Puerto Rico, is a leading member of Notre Dame’s intercollegiate ballroom dance team and a Fulbright fellow candidate who has been a research assistant in the Brennecke lab since the summer following his freshman year.

Science and dance both require precision, and that appeals to Colon, who also is the choreographer for Latin Expressions, an annual campus variety show. “You know, you step like this, you point like that. It’s very disciplined,” he says.

As part of the Brennecke lab’s effort to determine whether what are known as ionic liquids might be useful in removing carbon dioxide from power plant emissions, Colon has been helping to characterize their physical properties by testing them with the solvent ethanol. “It’s essential to know these basics, because they determine how these things will behave in more complicated systems,” he says.

Colon’s three years of undergraduate research will lead to a published paper, and he calls the experience the highlight of his undergraduate career. It also has whetted his appetite for more. “As an undergrad, I’ve gotten the basic tools to be a contributing member of society, but I want to do more,” he says. “If you want to impact society, energy research and chemical engineering are the way to go. I think that’s my calling. That’s why I want to get a Ph.D.”

If he is awarded a Fulbright, Colon hopes to work next year in Spain for one of Brennecke’s colleagues. “I want to apply these tools to make the world a better place,” he says.