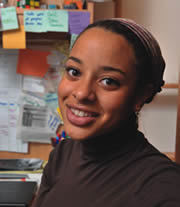 “I had read his book God, Country, Notre Dame and was so excited by all the social justice issues that he had worked on. It was exciting to know that this is a place that has responded to his energy, and I wanted to be part of that immediately,” she says.

Now an ND junior, Herkey has followed the president emeritus’ example not only in social justice but also in his globe-trotting ways. The anthropology and peace studies major spent the summer between her freshman and sophomore years honing her Spanish-speaking skills at Notre Dame’s foreign study program in Puebla, Mexico. As a sophomore she participated in ND’s Washington, D.C., program, interning with a non-governmental office involved in Latin American affairs.

Last year she spent her spring break in El Salvador on a “learning beyond the classroom” grant researching youth violence in the Central American country. She was gathering comparative information for a study she is working on examining Latino gangs in Los Angeles, many of which are Salvadoran.

At home in L.A. last summer she continued her gang research, interviewing people and collecting information on community responses to gang violence. “It was a really good experience,” she says, “because I got a taste of what it would be like to be an anthropologist in the field.”

For this spring semester she will be in Chile, studying, among other things, how that country has managed to recover from years of repression under the Pinochet regime. Finally, Herkey hopes to return to El Salvador next year at some point to gather more comparative information for her gang study.

“One of my friends calls me Freebird,” she says with a laugh. “He says, ‘You’re everywhere all the time.’”

When the anthropology major isn’t globetrotting, she works in the athletic department as a trainer, is a research assistant for a political science professor helping to assemble a database on all the military coups from 1945 to 2005, is involved with “Shades of Ebony,” a club for African-American women at ND, and is a member of the student leadership team planning a conference on human development under the auspices of the Ford Program in Human Development Studies.