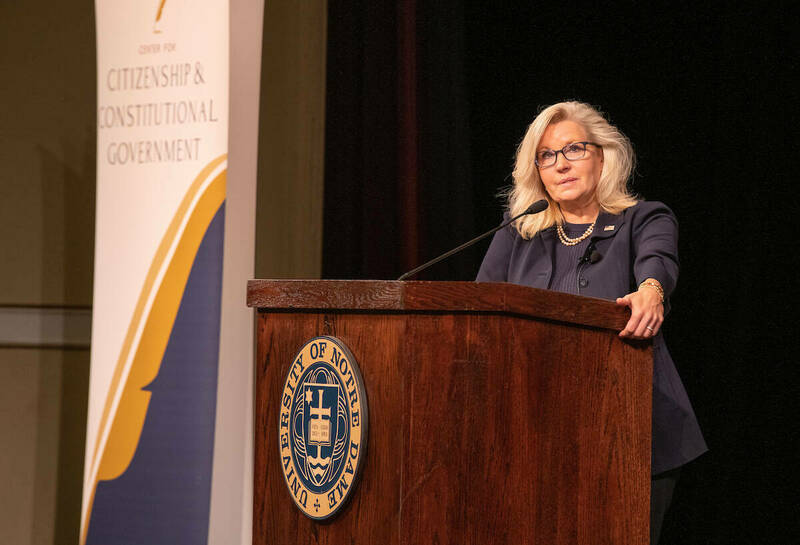 “Will we commit ourselves to our Constitution?” Liz Cheney asked a Washington Hall audience. Photo by Barbara Johnston

Republican Congresswoman Liz Cheney provided a stark message about the future of the nation if Americans embrace violence and falsehoods to prevent the peaceful transfer of power following fair elections.

And after describing scenes from the aftermath of the January 6, 2021, insurrection at the U.S. Capitol, she warned that former President Donald Trump poses a serious and ongoing threat to democracy.

“That is the fundamental fabric of our democracy. And that is what is at risk today,” she said.

Cheney spoke at a full Washington Hall on the topic, “Saving Democracy by Revering the Constitution,” in a visit sponsored by Notre Dame’s Center for Citizenship and Constitutional Government.

She described broken glass and other debris scattered throughout the U.S. Capitol the evening of January 6, 2021, after members of Congress were able to return to certify the results of the presidential election of Joe Biden. She also described officers in SWAT gear lined up in Statuary Hall and the Rotunda after they had fought the battle for the Capitol and forced the rioters from the building.

Many U.S. presidents in their inaugural addresses have mentioned the long tradition of the peaceful transfer of power, Cheney noted.

“It’s a miracle that the peaceful transfer of power has been honored by every American president — until Donald Trump,” she said.

There are too many people in elected office today who are ignoring the threat to the nation’s founding principles, Cheney said.

Cheney is Wyoming’s lone member of Congress in the U.S. House of Representatives. She sits on the House Armed Services Committee and also serves as the vice chair — the top Republican — on the January 6 committee, the select committee of the U.S. House investigating the attack on the Capitol.

Cheney is a neoconservative who broke with the mainstream Republican support for Trump and has become a vocal critic of the former president. In August, she lost in Wyoming’s GOP primary to a Trump-endorsed opponent by a huge margin, drawing just 28.9 percent of the vote. Her term will expire in January.

At a nationally televised hearing one day before Cheney’s Notre Dame visit, the select committee voted unanimously to subpoena Trump for relevant documents and testimony under oath about the events of January 6, 2021. “Our duty today is to our country and our children and our Constitution. We are obligated to seek answers directly from the man who set this all in motion,” Cheney said at the session.

During the hearings, witness after witness — nearly all Republicans — have testified that Trump had a premeditated plan to declare victory no matter the results of the election, Cheney noted.

“These are people who have stood up for the truth and who understand and recognize that in this nation, our institutions do not sustain themselves. They only sustain themselves because individuals do the right thing,” she said.

Trump made the decision to pressure state officials to change election results and encouraged the creation of slates of fake electors, Cheney said. And when his followers got to Washington, D.C., on that January 6, he knew they were angry and armed, and he sent them to march on the Capitol, she said.

Our duty as Americans means that we must conduct ourselves in ways that perpetuate the republic and that are worthy of those who've come before, Cheney said.

Cheney described her work years ago in countries around the world, including serving as an election observer in some nations that didn’t have long histories of safe and fair elections. While observing a polling site during parliamentary elections in northern Kenya, she said, the voters all fled when armed soldiers showed up and drove them away. She and the other observers assumed that would be the end of voting at that location.

“And then within an hour of these people being chased from the polling place by armed men, they started to come back,” Cheney said. “They started to walk back in to cast their votes. And we were stunned and so impressed that they were willing to risk their lives for the right to vote.”

After her primary loss, Cheney vowed to do whatever it takes to keep Trump out of the Oval Office.

Cheney said in September that if Trump becomes the Republican Party’s nominee for president in 2024, she will not remain a Republican. She has also said she’ll campaign for Democrats to ensure that Republican candidates who promote election lies don’t get elected.

She’s been mentioned as a possible 2024 presidential candidate, but hasn’t yet announced whether she’ll run.