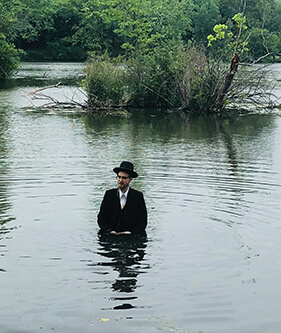 On one level, that’s all there is to this photograph. It’s exactly what it looks like, an associate professor of philosophy waist deep in water.

Untouched by Photoshop — although not all of his six children believe that — the picture represents undoctored reality. One day, on an otherwise routine walk to his car, Franks waded into Saint Mary’s Lake to pose for his official philosophy department faculty portrait.

How far those few steps transported him from the ordinary. That’s what he intended when the inspiration struck — to transcend the superficiality of a traditional publicity photo and reveal something deeper about himself.

With a new department website in the works, faculty members had the option to replace their portraits. “So I thought, OK, if I am to have a faculty photo, it should maybe have something that is meaningful,” Franks says. The result was as ambiguous as it was unusual for its genre, as if René Magritte had art directed an indie album cover.

For Franks, the juxtaposition of the familiar — the clothes he wears every day as a Hasidic Jew — with the incongruity of a fully dressed person standing in a lake reflects an important philosophical perspective. “Irony and the absurd are legitimate vehicles toward depth and toward maybe mystical ideas,” he says, “in the simple sense that they invite you to disrupt your conventions of thinking.”

Franks notes that Hasidic thought, as well as many other religious traditions, considers the quest for divine truth an impossibility. The sublime eludes human conceptualization, “so trying to conceptualize it, you’re bound to fail.”

This insight did not send him into the lake in despair. On the contrary, he wants the photo his colleague Christine Grandy took to reorient the viewer toward the profound meaning in the everyday.

“What absurdity can do,” Franks says, “is it can mock your own attempt to conceptualize something deep and force you back to the ordinary,” toward a realization that the depth that you want is in your everyday life. 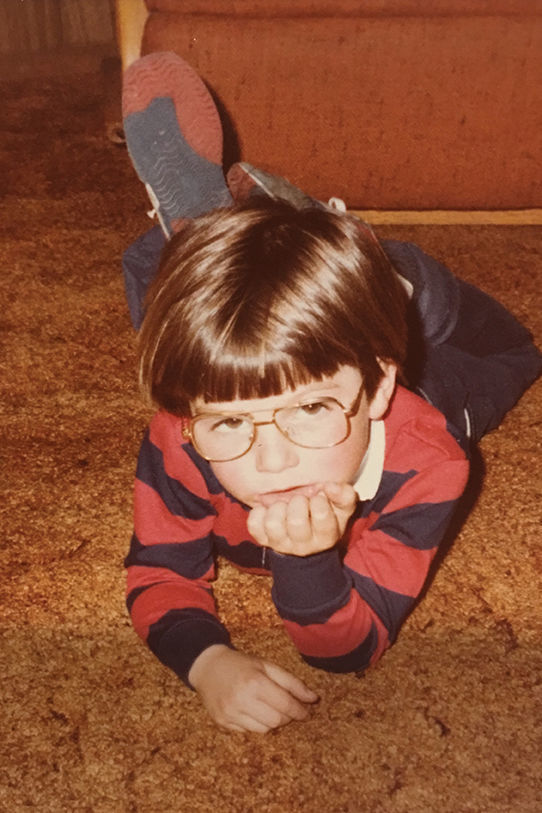 My grandfather took that photo when I was five. My mom found it last Christmas and said, “the philosopher,” when she handed it to me. It captures my temperament, but that’s not why I like it. I like it because it’s funny. (Huge, gold-rimmed glasses? Check. Bangs and a bowl cut? Absolutely. Orange shag carpet? That’ll look great in the basement.) But mostly, I like it because it’s current. Life’s hard, the world’s confusing and smart adults give different answers to the questions that matter most. I’m not still five, but I’m still taking those questions seriously. — Blake Roeber, assistant professor of philosophy 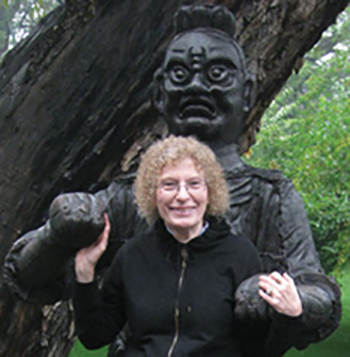 A friend from China

It is wonderful to find friends even in faraway places. Here is one I met in China, lending me a hand — actually two hands, strong as iron! Constructed around 1023 during the Song Dynasty, he was lounging around the Jin Temple complex in Shanxi Province when we met and were photographed together. I had just finished participating in an international philosophy of science conference at the Research Center for Philosophy of Science and Technology at Shanxi University, and I was delighted to be taken around for some sightseeing by fellow philosopher of science Professor Meizhen Dong of Nanjing Normal University. It was the first large-scale, invitation-only international conference in philosophy of science in China, and I was honored to be one of the 32 researchers invited to participate. The other participants came from Asia, Australia, North America, South America and Europe. It was a truly extraordinary experience! — Janet Kourany, associate professor of philosophy 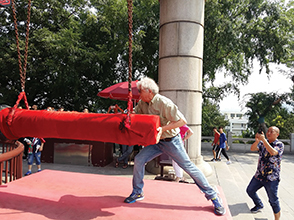 Summoned by the bell

This past summer I taught a graduate course in ethics and political philosophy in China at Wuhan University. In the picture, I am pushing a long beam into a huge bell (not seen in the picture) just outside of the famous Yellow Crane pagoda in Wuhan. This was how I summoned my students to class each day! — James Sterba, professor of philosophy