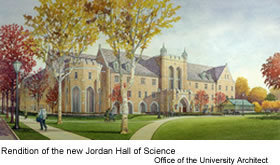 The University ended its yearlong moratorium on new campus construction in a big way November 1, breaking ground on what will be the most expensive building in school history, a long-awaited science learning center just north of the Joyce Center on Juniper Road.

The $70 million Jordan Hall of Science, expected to be completed in summer 2006, will feature 40 undergraduate labs for biology, chemistry and physics, several large lecture halls, faculty offices, a greenhouse, an herbarium and an observatory.

Also, work is resuming on a new home for the campus Security/Police and campus post office. The foundation for that $10.97 million building was laid in 2002 on the Stepan basketball courts. But then work was halted, along with nearly all other construction projects, because of slowed fund raising and a decline in endowment earnings tied to the sluggish economy. Expected to be finished by summer 2005, the new post office and police headquarters was designed by the Moake-Park Group of Fort Wayne, Indiana, in a gothic style similar to the new science building.

The current location of the post office is earmarked for an expansion of the law school. A hotel and conference center has been discussed for the site of the existing Security Building, near Saint Mary’s Lake on the west end of campus.

A third construction project okayed by trustees last fall involves a $21.25 million addition to the west side of the Loftus Center. The Guglielmino Family Athletics Center will house football locker rooms, offices and meeting rooms and will provide enhanced space for training and sports medicine, strength and conditioning programs and equipment. The designer-builder is McShane Construction of Chicago. Construction is expected to be finished by fall 2005. The project is named for and underwritten by a gift from the late Don F. Guglielmino and his widow, Flora. Don Guglielmino attended the University in 1939-40 and has previously made several gifts supporting the University.

The science hall will be underwritten with a gift from John W. “Jay” Jordan II ‘69, a University trustee since 1993 and chair of the board’s investment committee. He is the founder of The Jordan Company, a private investment firm, and chairman and chief executive officer of the Chicago-based holding company Jordan Industries. He previously funded the large auditorium named for him in the Mendoza College of Business.

The science center has been designed by the S/L/A/M Collaborative of Glastonbury, Connecticut, architects of the Eck visitors center and bookstore and the Coleman-Morse Centers.