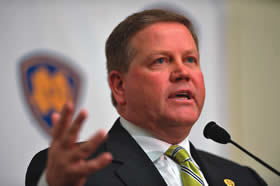 Brian Kelly was introduced Dec. 11, 2009, as Notre Dame’s new head football coach after leading his Cincinnati Bearcats to an undefeated regular season and second consecutive Big East championship. The 2009 Home Depot Coach of the Year is 171-57-2 in his 19 years as a head coach at Cincy, Central Michigan and Division II Grand Valley State, where he won two national championships.

The staff of Notre Dame Magazine tracked the media response to the search for a new coach and the hiring and introduction of Brian Kelly. Here we offer a digest of links to the hiring of the University’s 29th football coach, in chronological order. Scroll down to see the most up-to-date link.

Who will replace Coach Charlie Weis? The ND campus plays the guessing game.

The Onion’s take on the Coach who rejected ND.

Dennis Dodd of CBSSports.com, Notre Dame gets right man for an immense job.

Kelly outlines plans for the ND team at his introductory press conference.

Chicago Tribune columnist David Haugh, He assures the faithful, now all he has to do is win.

Pat of the Blue-Gray Sky (A Notre Dame Scrapbook) comments on Kelly’s plans.

Bill Simson of the Huge Show, It’s hard not to root for Brian Kelly at Notre Dame.

Bleacher Report, Cincinnati defection or Notre Dame selection? The root of the debate.