I didn’t own a laptop until I began college. Before that, my three siblings and I shared the family computer located in the middle of our kitchen. Arguments over computer use were a fact of life in our household; there wasn’t a lot of extra time to spend on Facebook or Netflix.

So in fall 2012, when a professor in the Gallivan Program in Journalism, Ethics and Democracy announced each student would receive an iPad, I remember thinking, Seriously? Our very own iPad? Sweet.

Joshua Roiland, our instructor for Journalism and American Democracy, opened class by detailing the syllabus and told us we’d spend a great deal of the semester analyzing how journalists cover political issues, politicians, policy changes and government. Since it was an election year, we’d have no shortage of material to discuss. He explained that we’d be using a class Twitter feed to foster an ongoing discussion online. Each student was responsible for posting one relevant story to the class hashtag (#NDJED) every day. 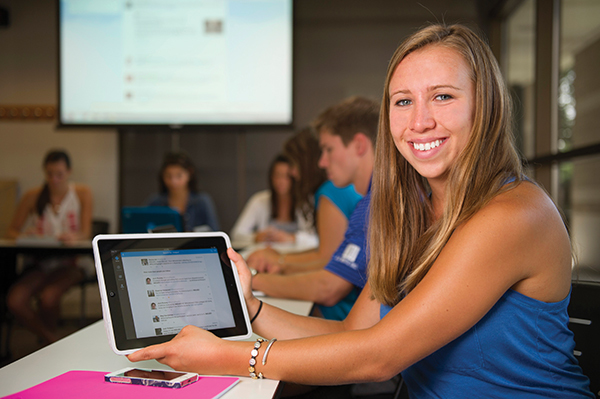 “Also,” he then told the 15 of us, “you’re each going to receive an iPad that you’ll be expected to use to contribute to the class Twitter feed, write weekly blog posts and stay up-to-date on election news. Outside of these assignments, you’re welcome to use the iPad for personal tasks.”

A week later when Professor Roiland distributed the iPads, we were downright giddy.

It didn’t take long for me to become hooked on the technology. The beginning of each class was devoted to learning about the iPad. Students could comment on the Twitter feed entries they found most pertinent and share cool things they’d discovered about the device and troubleshoot problems we may have encountered. I spent a good deal of time playing around with the tablet in order to get comfortable with it; I was surprised how quickly I caught on.

I learned about such applications as Flipboard, an aggregator that collects news stories from publications, blogs and other sources I approve, and creates a board of news reports customized for my interests. As a result of that app, I began paying attention to current events and became more informed. It was programs like this — ones that took tasks I was already performing, such as watching the news, and simplified them — which made the iPad so useful. I also used it for personal things like playing music or watching Netflix.

Unlike a laptop, the iPad has a touch screen, which makes it easier to perform tasks digitally. It also weighs less. Before receiving the iPad, I rarely used any technological devices during class time, but I soon began bringing the iPad to my other classes as well. I used it to read and annotate my Introduction to American Studies assignments, complete my theology reading (the App Store has a Bible app, in case you were wondering), check homework on the University’s Sakai platform and correspond via email.

That October, I read John Jeremiah Sullivan’s “Upon This Rock” for my Literary Journalism in America course. While discussing his essay in class, I had the PDF document of the GQ story pulled up on my iPad, where I had annotated it over the weekend using my PDF-Notes application. I used my finger to slide back and forth between pages. The story is about Sullivan’s trip to a Christian rock festival and subsequent reflection on his own brief experience as a born-again teen.

In class, numerous questions came up about Sullivan’s religious background that weren’t answered in the text. I hit the home button on my iPad, opened Safari and Google-searched the author. The answers to these questions were a few clicks away, and I was able to share them with the class. Once we resumed discussion of the story, I simply reopened the document to continue following along. In fact, in any given class I routinely kept numerous tabs open with background information to supplement whichever story or author we were discussing. It never hurt to have the extra information at my fingertips to clear up a debate or answer a lingering question.

In 1995, 16 million people used the Internet worldwide. Twenty years later that number has grown to 2.9 billion. In those same 20 years, technology has become a ubiquitous part of daily American life. Attending class in high school is different from college for many reasons, but one of the most visible is the presence of devices — laptops, tablets and smartphones — in the classroom. A 2010 study showed that 88 percent of college students owned laptops and 96 percent owned cell phones. Surely those numbers are higher now, and the use of tablets is also rising.

Teachers may fear that students who have their laptops open are playing games, checking social media or working on assignments for other classes, but I have found these technologies allow students to engage further with the course material. While I can imagine that looking out at the backs of 20 computer screens would be off-putting for professors, they would be wrong to assume every student is wandering instead of listening.

The opposite has been true in my experience. At the end of that fall semester, Professor Roiland asked us to reflect on our experience with the iPads and whether they distracted from the subject matter. How many of you, he asked, have checked Facebook during class time at some point this semester? Not one hand went up. What about email? Okay, almost everyone raised a hand. Perhaps we weren’t all perfectly focused on class, but we weren’t just using the devices as a distraction either.

Now that these technologies exist, I’ve seen how they can be used in the classroom to enhance the educational experience. Yet everyone approaches the technology dilemma differently. Some professors encourage students to use smartphones, tablets or laptops, while others flat out prohibit them in the classroom. But fostering the use of technology does students a favor by exposing them to tools vital for their professional lives. And outlets here at Notre Dame, such as Chris Clark’s NspireD2 technology blog, help professors use it to their advantage.

Programs like Microsoft Word Notebook allow students to take notes and record lectures at the same time. Microsoft’s OneNote for Mac and Windows (similar to Evernote) allows students to save text, pictures and links to their library, which they can conveniently refer back to at exam time. Even Google Docs, which allows multiple users to collaborate on one document, can be helpful for sharing notes or study guides with classmates.

I’m an American Studies major and Journalism, Ethics and Democracy minor, but I’ve taken classes in a range of departments and subject areas during my time at Notre Dame. Use of technology is not necessarily beneficial for every lesson plan, but it offers a range of advantages that can improve classes in all disciplines.

The following semester, I signed up for The Future of News, this time knowing the iPads would be a part of the course objectives. Instead of observing how journalists operate in the world today, for this class we used the tablets to produce our own photo, audio and video journalism. A month into the course, Professor Roiland assigned us to create a 5-minute audio report on a topic of our choice. For my story on “Ring by Spring,” the trend of marriage engagements senior year, I conducted a series of interviews using the recording application Hokusai. We were then permitted to use our computers to crop the audio recordings and make a final clip, for which most of the class used the Audacity app.

Because of our collective unfamiliarity with this technology, problems were ubiquitous. Some students lost their recordings and had to re-do interviews, others were unable to transfer the recordings from the iPad to their computer and almost everyone struggled to get comfortable with splicing separate audio tracks together. We worked as a class to solve common issues and in the end produced final projects that were both informative and technologically sound.

The same could be said for the final video project, in which students used either iMovie or GarageBand to create a 5-minute documentary zooming in on such subjects as Indiana gun shows, vegetarian eating and parietals at Notre Dame. After spending a few hours of class time learning the programs and practicing at home, we became adept at utilizing the software programs. Ultimately, these projects served as tremendous learning experiences that not only allowed us to tell important stories but also instilled skills we can use again and again.

Technology can bring any number of positive changes to a classroom environment. I recently took the political science course Politics and Social Networks, in which we discussed hot-button issues such as abortion and gay rights. Because not everyone felt comfortable voicing their opinion on these topics, our teacher’s solution was to poll the class through our cell phones. We each texted a five-digit code to a certain number, and the website would generate the anonymous results of his poll, giving our professor and the class an honest assessment of what we thought. Sure, the teacher ran the risk of losing students’ attention when he asked them to pull out their phone in the middle of class. But he left it up to the students to keep their concentration.

It’s been almost two years since the birth of our journalism class hashtag, and the #NDJED feed is still going strong. Students from subsequent sections of the Journalism and American Democracy and The Future of News courses have joined the conversation each semester, creating a continuous online dialogue to expose everyone to meaningful stories, fresh technology and inside tips. It’s the technology that has enabled the teaching and learning to stretch beyond the classroom and outlive each semester.