Craig Cramer, professor of organ, sits on a bench seat in the Grace Hall café, hands extended gracefully above the table, feet elevated several inches off the floor, offering a sobering first lesson in the athleticism of his art. 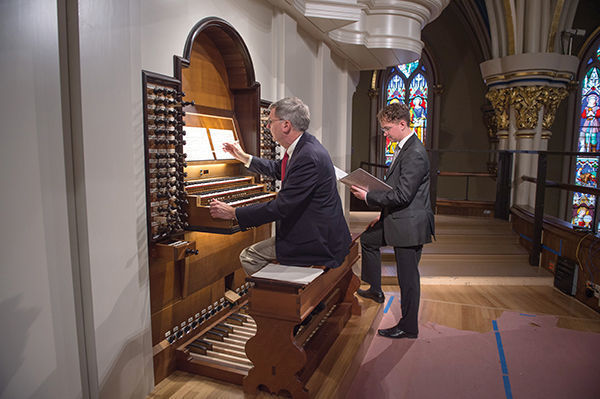 “You have one fixed point when you’re an organist, and you’re sitting on it. So, just sit like this,” he begins. “Do that for a half-hour. Then do that for an hour.” Then two. Then four — limbs hovering all the while. Don’t lean forward: You’re sitting before a sensitive and powerful musical instrument.

“It’s tremendously physically demanding,” Cramer adds, replete with neck and lower-back pain. And, despite a lifetime of this kind of exercise, those core muscles atrophy as you get older.

How about the hands?

“Well, I’m very fortunate so far at age 62,” says the internationally celebrated musician and scholar who has spent his entire 35-year professional career at Notre Dame. “I haven’t had the horror of arthritis visit me.”

Cramer’s good fortune is a blessing for the revival of congregational singing that he and his colleagues in Notre Dame’s multidisciplinary sacred music program are working to inspire — especially in the notoriously closed-mouthed Catholic Church. At a time when dozens of collegiate organ studios have lapsed into dormancy or operate with less than a full slate of students, Sacred Music at Notre Dame has vaulted the University into the upper echelon of schools training musicians for church service by offering a master’s degree in voice, and both master’s and doctoral degrees in choral conducting and organ. Graduates have no trouble finding good jobs in a high-demand market, says music historian and theology professor Margot Fassler, the program’s director.

Now, with the installation of the Murdy Family Organ in the Basilica of the Sacred Heart, Fassler says Notre Dame can compete for the best graduate students in the country “even more successfully . . . [and] with a collection of instruments we didn’t have before.”

Things weren’t always so good, especially for the organ majors. When Cramer arrived in autumn 1981 carrying prestigious degrees from Westminster Choir College and the Eastman School of Music, he inherited two students. “The program was not flourishing,” he says. The new music department chair, Calvin Bower, assured him they would build the organ program. Sure enough, within five years Cramer had 13 undergraduate and graduate music students majoring in organ performance.

Over the next 20 years, leading up to the launch of the full sacred music program, organ students came to campus on the strength of Cramer’s reputation as a teacher and performer. Today he counts among his students the directors of cathedral choirs and thriving organ programs. He has more than 15 CD recordings to his credit and lists among his notable accomplishments an 18-concert “organ crawl” of Indiana’s most distinguished mechanical-action instruments, in which he presented the complete organ works of Johann Sebastian Bach. He travels to Europe every year, invited to study and perform on some of the continent’s landmark instruments. Increasingly, he brings his students with him.

“Craig is the greatest organ teacher in the United States,” Fassler says. “He’s a brilliant analyst of music. He sees through to the bare bones of how a piece is constructed in its very finest details and in its overall architecture.

“So he teaches students how to get inside of the music analytically and then he teaches them how to play on the breath of the instrument so they can bring to fruition their understanding of it. Some people are good at one or the other. He’s brilliant at both.”

In 2004, Notre Dame effectively gave Cramer a pair of enviable recruiting tools to add to his personal gifts. One was a recital hall dedicated to organ and choral performance in the DeBartolo Performing Arts Center. The other was the unique, 34-stop organ inside it, designed and made by hand by Paul Fritts & Company Organ Builders of Tacoma, Washington, in the northern German tradition of organs that would have been available to the masters of the 17th and 18th centuries such as Bach and Dietrich Buxtehude.

Suddenly, instead of talking, Cramer could take prospective students into the Reyes Recital Hall and unleash them for an hour. “Inevitably, I come back and they say, ‘Now, if I came to school here, would I actually get to play on this organ?’ The answer is, ‘You have your lessons on this organ, you play your recitals on this organ, and everybody has at least three hours of practice time per week on this organ.’”

Cramer, who spins elaborate sports metaphors with the easy precision of a barstool jockey, likens the DeBartolo organ to a thoroughbred horse. “If you don’t know how to handle it, it will be very temperamental and not respond to your guidance. Once you relax into that horse and understand the trust that has to go on in order for you to ride it well . . . you will get amazing things out of that horse.”

Think the analogy stretches the point? “The wind characteristics of that organ are approaching ideal,” Cramer explains. “If you don’t play it in a sympathetic way, the wind will jiggle. . . . It makes the music sound nervous. So you have to approach it in a very relaxed way, so that you’re almost feeling the sound out of the keys.

“When you finally relax into it, the sound blooms, and you can’t fake that.”

If the concert-hall organ is a thoroughbred, the new basilica organ may well be Secretariat. Fritts’ magnum opus, the 70-stop organ has numerous unprecedented features like its combination of German and French reed pipes that greatly expand, both geographically and chronologically, the literature organists may play on it.

Its chief virtue is the quality of its sound. “Paul is very careful,” Cramer says. “He hates loud organs. So he’s very careful to start with blend as the ultimate goal of the instrument, so that you don’t have this sound or that sound predominating. The whole thing acts together, like an orchestra.”

In the basilica that means “velvety” music that reaches the Lady Chapel for large Masses and quiet Sunday vespers — not by force of “sheer decibels,” in Cramer’s phrase, but with a large and sophisticated bass. “It’s the capacity of the organ to have enough heft, enough weight, enough gravity, enough breadth, to fill that big space,” he explains.

While Sacred Heart’s busy liturgical schedule may somewhat limit their access to the Murdy, Notre Dame organ students will now be able to learn, practice, give recitals and, above all, play for liturgies on an instrument that, together with the DPAC organ, will allow them to address almost the full range of the organ literature, Cramer says. “And that’s very exciting.”

If nothing else, this means that when his students’ physical and technical prowess inevitably wane decades hence, they’ll be able to “get more intelligent about the strike zone and become more canny and more wily, like [Hall of Fame pitcher] Greg Maddux.”

In other words, having trained on a pair of world-class instruments under the tutelage of a 21st century master, they’ll have a far richer reserve of musical insight on which to draw.