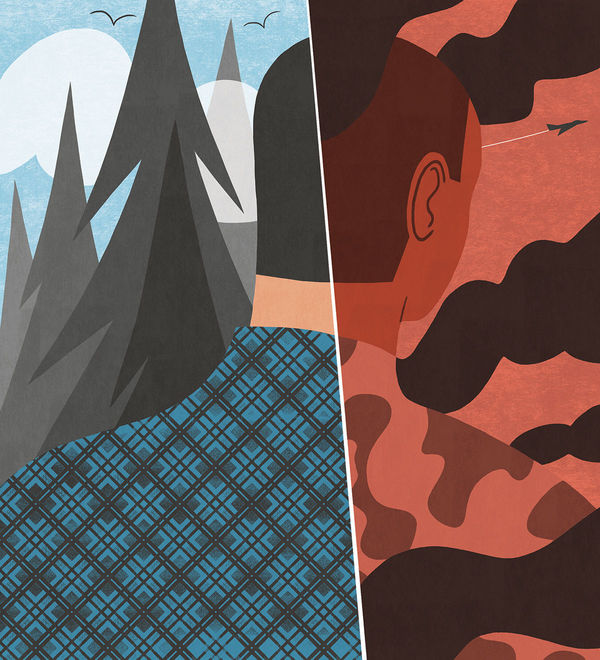 It was, I suppose, a coincidence. Although in the way of coincidences, there was a whiff of the mystical about it.

It started at 5 a.m. in Albuquerque, where I’d gone for a business trip. I had a plane to catch, but the dry air and some beers the night before had given me a headache. I dug around in the grungy recesses of my shaving kit for some ibuprofen, but no luck.

Instead I found something useless to my hungover condition: a little mirror whose blue case was emblazoned with the Big Dipper, bayonet and mountain insignia of the U.S. Army’s 172nd Infantry Brigade. It was a souvenir from a long-ago visit to Fort Richardson, Alaska. I was in the National Guard then, so the mirror came in handy for shaving in the field. Yet I had long since retired from the Guard, and now stay in urban hotels with baronial bathrooms where three people could shave comfortably at the same time.

“Beautiful,” I muttered, with throbbing temples. “Why will I drag around sentimental crap like this for 10 years, but forget to buy Advil?”

The plane landed in Atlanta, where I would catch a connecting flight to Grand Rapids. After an overpriced plate of mediocre pasta, I merged with the throng for a 10-minute slog through the terminal. For most of the way, I was on the heels of the same soldier. Then, at my departure gate, he stopped dead in his tracks and stood transfixed beneath a TV monitor. Across the screen flickered a CNN story about an Afghan woman who was raped by Afghan police.

You see plenty of soldiers at this airport, close as it is to Fort Benning. They’re usually privates fresh from basic training, as gangly and hyper as spring colts. Not this trooper. His boots were run down, his fatigues frayed and grimy, his neck burned angry-red by a fierce sun. He wore staff sergeant stripes, which suggested he’d been in the Army eight years or so.

I stole a glance as he watched the CNN story and his face said it all: disgust, resignation, exasperation and a disturbing degree of fatigue for someone who looked to be in his mid-20s.  His condition couldn’t have been more obvious if he’d taken a felt marker and written “Combat Vet” in black letters across his forehead.

As he shook his head wearily and turned away, I saw it. On his left shoulder was a unit patch — with the Big Dipper, a bayonet and mountains.

No . . . freaking . . . way, I thought, recalling the mirror. Of the thousands of people in this airport, the guy in line next to me is with the 172nd Infantry.

It was one of those rare moments when the veil drops away, and fate or the universe or divine will reveals its purpose with unassailable clarity. You just know. And since coincidence had so clearly shown its hand, I knew that some deeper connection was inevitable. So, as we waited at the gate, I stole a glance over the soldier’s shoulder and looked at his boarding pass.

Of the plane’s 200-odd passengers, guess whose seat was right next to mine? It was as goose-bumpy as it sounds.

On the flight from Atlanta to Grand Rapids, I soon learned that the affable soldier next to me was named Adam. And man, was he wound up. He was quick to talk. Too quick. He’d long been in the company of soldiers, where guileless honesty and unfailing camaraderie were essential for survival and kinship. Now, outside the warm circle of his tribe, these traits made him appear vulnerable and indiscreet.

But how could it be otherwise? Two days earlier, he’d been in combat. He was, in fact, 48 hours removed from a bare-assed mountain outpost, reachable only by helicopter, that sat astride a Taliban infiltration route a few kilometers from Pakistan.

Adam had already traveled 40 hours, nonstop, for a 15-day leave that marked the halfway point of his one-year tour. There was no time to primp: The red dust of south-central Asia still clung to the legs of his fatigues. As he spoke of war, his voice — tense and oddly detached — sounded as if he were still there. It was all combat speak, delivered with the matter-of-fact lethality of a front-line infantryman.

While I can't say I knew him, I dare say that he began to sound more like himself — more Michigan boy than locked-and-loaded combatant.

At one time, I’d been a military journalist. I knew a “Ma Deuce” is a .50 caliber gun, that their battle damage assessment had covered their use of expensive 155mm artillery rounds and air-dropped cluster bombs. It was tempting to listen and, with vicarious bravado, ask leading questions such as my dated military knowledge would allow. But I also know how easy it is for strangers on an airplane to say too much — especially one who’s endured what Adam has. I thought, too, about the reason that fate had plopped me into the seat next to his. Was it to goad a young veteran into reliving gory memories that may haunt his dreams for a lifetime to come?

About then I had an intimation that it was time to divert the conversation. He needed to leave the murderous crags of the Hindu Kush behind and turn his heart toward Michigan. And in November, there’s only one thing to ask a rugged guy from Pere Marquette River country who’s handy with firearms.

“So,” I ventured, “you gonna hunt deer during your leave?”

That must have been the best question that any person, on any airplane anywhere, could have asked him.

“Are you kiddin’ me?” he burst out. “I’ll be out tomorrow morning! Me and my dad built this great deer blind last year that’s like a little apartment! Plus, my uncle owns an archery shop, and I’ve got some great bows, and I love to bow hunt . . . and, uh, I really don’t want to touch a gun while I’m home.”

No, Adam, I suppose not. For the next half-hour we spoke only of wild Michigan, of big bluegills and the lily-pad serenity of wilderness lakes, of the flash of silvery coho in his beloved Pere Marquette, of cagey bucks and wily turkeys — things Adam knew, loved and, yes, could hunt and kill with a modicum of grace.

As the conversation eased I noticed something hopeful. With his verbal ammunition from the frontlines spent, the pitch of Adam’s voice had lowered a few registers. To speak with such joy of the north woods had been a healthy tonic. While I can’t say I knew him, I dare say that he began to sound more like himself — more Michigan boy than locked-and-loaded combatant. You could almost hear the whir and rustle of white pines creep back into his vocabulary. Peace. Quiet. The pad of footfalls on holy ground.

There was, of course, the unresolved matter of the mirror. Although it felt anticlimactic, I felt duty-bound to give it away. Somehow, this inconsequential thing seemed to have led me here. I got up and, in the tiny airplane restroom sink, scrubbed off the years of dirt and soap scum.

“Oh. Well, hey, thanks,” he said, pleasant but underwhelmed. “We can’t take mirrors in the field” — shiny stuff attracts snipers — “but this is cool. Yeah, this is cool.”

We talked some more about the Army, but mostly of his wife and kids. Then, as if on cue, we both reverted to what strangers usually do when seated side by side on an airplane: ignore each other and mind their own business.

Once we landed in Grand Rapids, I gave Adam a wide berth as we left the terminal. His family was there to greet him. I didn’t want to intrude, didn’t want to be awkwardly introduced as “Tom, who gave me this uh . . . this, this mirror with my unit patch on it.”

I walked alone to the parking garage and that was it. The aperture of the universe, the one that allows us to glimpse briefly the larger meaning of things, had again closed tight. All that remained was a joyful sense that I’d been part of something mysteriously positive, albeit through no merit or intention of my own. The “clean savor” of grace, as Thomas Merton termed it. A verse of Scripture also came to mind, but I couldn’t remember it exactly until I got back home: "For if any are hearers of the word and not doers, they are like those who look at themselves in a mirror . . . and on going away, immediately forget what they were like" (James 1:23-24).

In a fierce land like Afghanistan, it must be easy to forget what benign nature looks like. You see a stand of healthy pines, but they’re cover for snipers instead of partridge. You endure the privations of snow and cold, but without the civilian ease and cook-stove hospitality of a deer camp. After a while you don’t even sound like yourself, because the war has no use for gentle words that describe things innocent and free.

The journey back from such a place may be a lifetime in the making. Some it will break, while others, as Hemingway said, will grow “strong at the broken places.” In Adam’s case, I hope the healing began, however slightly, when a stranger held up a mirror to a tired soldier. In that reflection, I pray he found anew the green salvation of home.

Tom Springer is a freelance writer in Three Rivers, Michigan. His book, The Star in the Sycamore, will be published by Arbutus Press in fall 2019.