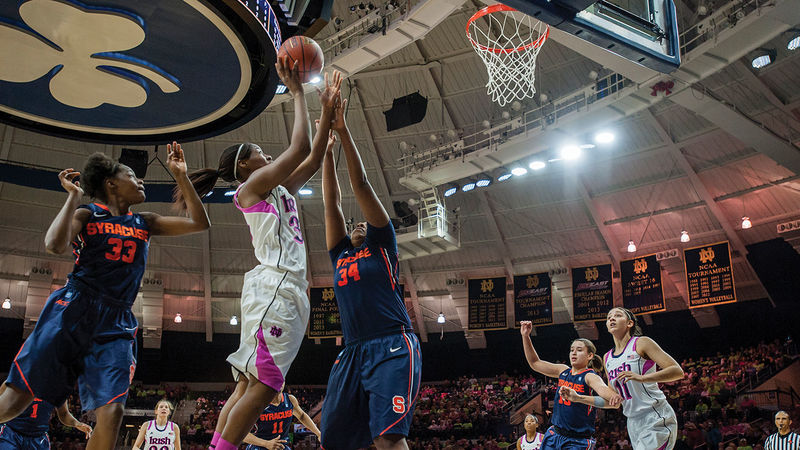 The Notre Dame women’s basketball team was 37-0 when it lined up for the opening tip of the national championship game at the Bridgestone Arena in Nashville, Tennessee, in April. It was the third time in four years that Coach Muffet McGraw’s Fighting Irish had advanced to the title match — the fourth straight year to reach the Final Four. In McGraw’s 27 seasons at Notre Dame, her teams have won 663 games and one national championship. She’s been inducted into the Women’s Basketball Hall of Fame, and her players, such as Ruth Riley ’01 and Skylar Diggins ’13, have attracted national attention and international accolades.
Irish Hysteria - Women's Basketball '13-'14 - Images by Notre Dame Photography The program’s success — and the game these women bring — has also generated a robust and frenzied fan base: whoopers and hollerers, green-clad and bead-wearing, costumed, intense and loyal to the core. The average attendance at home games is a healthy 8,700 (extra noteworthy in that only a sprinkling of students — or young people — ever show up). And when “the girls” have road games on TV, their followers pack sports bars and eateries to cheer them on, loudly. So when the Fighting Irish lost 79-58 to archrival UConn (39-0) in the title game, the phenomenon that is Notre Dame women’s basketball fell hard — but not without talk of promising seasons ahead.