By Notre Dame standards, rugby is not a major sport. It’s a club sport, as opposed to varsity, which means it falls under the administrative umbrella of RecSports rather than Athletics. Justin Hickey, the men’s head coach and director of the men’s and women’s programs, is Notre Dame rugby’s only full-time employee. 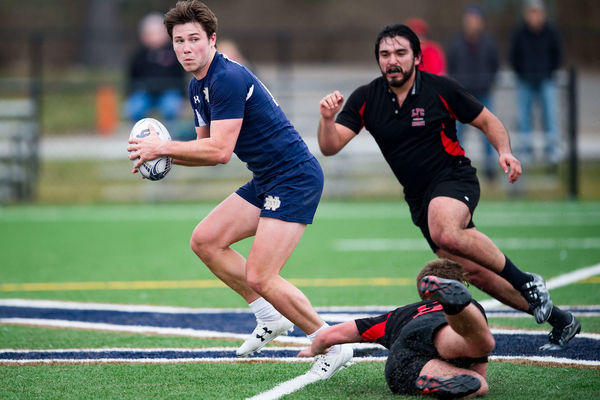 Notre Dame's club rugby team is about to get a boost from their pro counterparts in Ireland. Photo by Matt Cashore '94

But big things are happening through the club’s relationship with the Irish Rugby Football Union (IRFU), home of what is currently the world’s second best men’s national team.

In 1968, Notre Dame rugby made the University’s first athletic trip of any kind to Ireland. The team played five games and the tour gave several players a chance to get to know the home of their ancestors. Today, Notre Dame rugby and the IRFU, which organizes domestic tournaments in Ireland and sponsors the national teams, have a partnership designed to elevate both Notre Dame’s level of play and Irish rugby’s profile in the United States. Hickey traveled to Ireland last year to work with the national teams and encountered a culture devoted to the sport.

“They’re able to help provide a level of knowledge, a level of expertise around rugby that is almost incomparable here in the United States,” he says, “whether that’s on-field coaching knowledge or sports-science knowledge behind the scenes, like nutrition, stats and performance.”

For the IRFU, working with one of America’s premier collegiate athletics brands and symbols of Irish America offers a commercial boost. With more than 30 million Irish-Americans in the U.S., more than five times the population of Ireland itself, the Notre Dame connection offers Irish rugby a huge potential fan base.

“It certainly opens up avenues that wouldn’t normally be available to us,” says Joe Lydon, a former professional rugby player from England who now leads the IRFU’s international talent identification and development program.

Irish rugby has made inroads into the U.S. before, such as a historic victory at Chicago’s Soldier Field in 2016 when the national team beat New Zealand for the first time in 29 matches. As a result of the relationship, Notre Dame Stadium could host such games in the future.

“I hope it will happen,” Lydon says.

Like Hickey, Ireland coaches have crossed the Atlantic in support of the partnership, working with the men’s and women’s teams during their three visits to campus since March 2017. Modern technology allows collaboration from afar. The IRFU codes and analyzes video footage that Notre Dame uploads after games, for example. In the two years since talks between the two programs began, such collaborations have evolved organically.

“We’ve kind of stumbled upon different ideas as we’re going through it, but at the end of it, it’s about our people,” Hickey says. “So, how do we make the experience better for our students, how do we develop our coaches and our staff and just provide a better experience and all-round well-being for the program?”

One answer: When Notre Dame rugby players study in Ireland through the University’s academic programs, they may also train and compete with the country’s best players and coaches.

“They’re around and immersed in a rugby environment in a country that, everywhere you look, it’s rugby, rugby, rugby,” Hickey says. “So they’re literally getting the highest-level rugby experience that they can get, and when they come back to us, you can see that on-field growth, but you can see the human growth as well. It’s incredibly valuable.”

Rasmus S. Jorgensen is a former intern at this magazine. Contact him at rschjorgensen@gmail.com and @ReadRasmus.