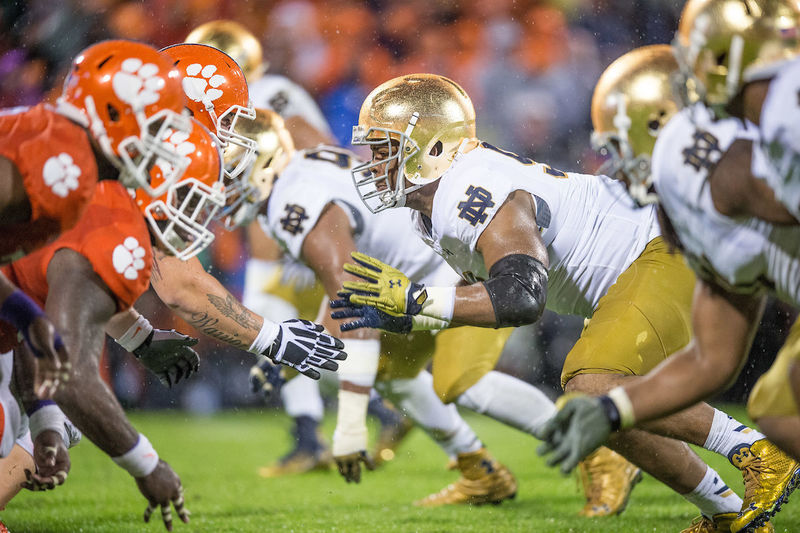 From 2015 onward, Notre Dame-Clemson has brought a deluge of intensity and intrigue. Photography by Matt Cashore ’94

The Notre Dame and Clemson football programs were linked together for me long before 2015, when, as a senior at Notre Dame, I wrapped myself in cellophane to watch them square off in Death Valley during an unforgettable once-in-a-century rainstorm.

I attended Clemson as a college freshman before transferring to Notre Dame in 2013. Though I thoroughly enjoyed my time there, I have never felt any split allegiance watching the schools compete. I root for my alma mater like my life depends on it. Losing means a barrage of gloating messages from my Clemson friends, who wonder how I could’ve ever left the school to cheer for Notre Dame’s inferior football team. (A better question would be why I left the sunny skies of Upstate South Carolina for the blue-gray of northern Indiana, but that’s a column for another day.)

Prior to the 2015 game between No. 6 Notre Dame and No. 12 Clemson, the two teams had met only twice in history — during the Fighting Irish national championship season of 1977 and again in 1979. The ’15 game proved an instant classic, when a drenched Notre Dame offense failed to convert a two-point conversion to tie the game late in the fourth quarter.

After the upset, Clemson coach Dabo Swinney declared on the field that the game was “BYOG — Bring your Own Guts!” a Dabo-ism that has remained in the lexicon almost as long as it has taken for my shoes to dry out. Only a couple years later, five new Notre Dame-Clemson games were scheduled in 2027, ’28, ’31, ’34 and ’37. That did not include the games already scheduled for this year and 2022 at Notre Dame — or any potential postseason matchups like the 2018 College Football Playoff semifinal or Saturday’s ACC Championship.

As the two square off Saturday for the fourth time in six seasons — and the second time in six weeks in a matchup of top-3 teams — I wonder if we are watching the beginnings of a modern college football rivalry.

Rivalry games cannot be invented or declared, as one-time University of Connecticut head coach (and former Notre Dame assistant) Bob Diaco discovered. He decided he wanted to create a rivalry against American Athletic Conference opponent the University of Central Florida. After UConn beat the UCF in 2014, Diaco suggested dubbing the series the Civil Conflict—the FL and CT in “conflict” representing the opponents’ states. A few months later, UConn football tweeted a photo of a freshly minted trophy and a countdown until the next game between the two.

Less than five years later, mention of the Civil Conflict has disappeared everywhere except mocking message board posts. Diaco was fired in 2016. UConn left the AAC. The trophy has gone missing after UCF abandoned on the bench at UConn’s Rentschler Field.

Like the relationship between you and your freshman SYR date, a good rivalry needs buy-in from both sides, and time to grow and evolve together. Just because you say it’s a thing doesn’t mean it’s a thing.

So, is Notre Dame-Clemson a thing?

Each game over the past five years has carried national title implications. The 2015 loss to Clemson certainly kept Notre Dame out of the playoff (though had the Irish beaten Stanford, they might still have made it). Defeating Notre Dame that year propelled Clemson to the championship game before losing to Alabama (another thing the Irish and Tigers have in common).

Both the 2015 and 2020 regular-season matchups aired in primetime and scored massive ratings. The only lopsided game yet was the Cotton Bowl playoff semifinal — and if you want to really get upset you can read the text messages I received after that one.

College football rivalries are about fun, sure, but also a deep, mutual hatred. For instance, if you extracted my DNA, you would find a sequence reading M-U-C-K F-I-C-H-I-G-A-N.

You can bet that Clemson fans are irritated that conference interloper Notre Dame kept the Tigers from going undefeated in the ACC this season, but they still believe they’ll win it all. A Notre Dame victory on Saturday could be a death blow to the Tigers’ playoff chances — and definitely would be in any but this pandemic-dampened season.

A win would make Notre Dame the ACC champion in its first and only season in the league — a designation almost too hilarious for Irish fans to hope for — firmly solidifying the program’s status back among college football’s aristocracy and boiling Clemson fans’ blood like a roadside peanut.

Sometimes it’s difficult for Notre Dame fans to keep track of all the opponents with a claim to a legitimate rivalry. There’s obviously USC (another thing the Irish and Tigers have in common, if in acronym only) and Michigan and Navy and Stanford . . . The Irish play for a whopping six rivalry trophies — and none of them have ever been abandoned on the sidelines, as far as I know. Does the legendary history make Army a permanent rival? Has Boston College, despite crushing Irish dreams a time or two, ever really been one?

Can you call it a rivalry when the game isn’t scheduled regularly? Or if the matchup hasn’t been competitive in six decades? I understand the history between Notre Dame and Navy, but Grandpa Billy, it’s the modern college football era and defending the triple option every season is going to end up costing us!

Much like the college football playoff rankings, the science behind rivalries is rather ambiguous and up for interpretation.

Whether or not Notre Dame-Clemson qualifies, I know this much: the winner of Saturday’s game gets a trophy — and the certainty of playing for another one, the one that matters most to both programs.

And I can’t think of two teams I’d rather watch play on Saturday.

Jessica Smetana is a producer at Sports Illustrated, where she has covered everything from Super Bowls to marble racing. When she isn’t watching sports, she’s baking pies or watercoloring. Her parents and her older sister attended Notre Dame.