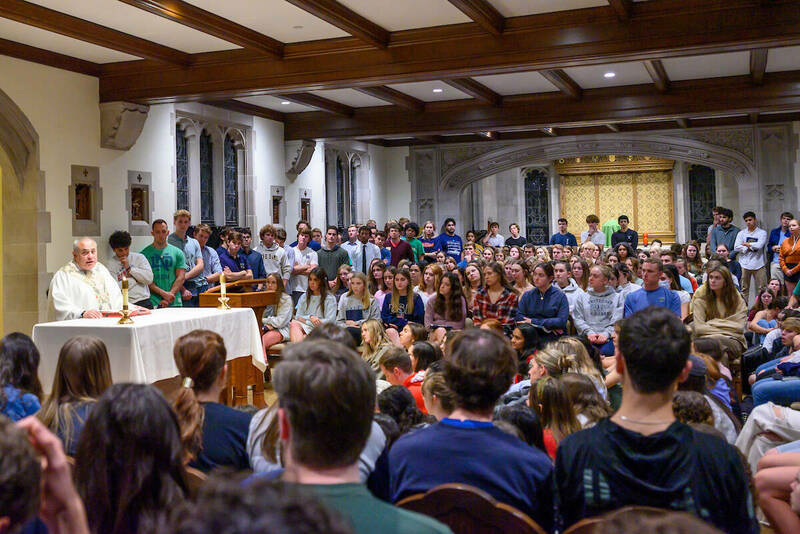 They’re going to need a lot of milkshakes. Photography by Leah Ingle ’23

The lively chatter of friends filled St. Patrick’s Chapel in Dillon Hall on a Thursday night in October before the celebration of the 25th anniversary of the dorm’s popular Milkshake Mass. At 10 p.m., Father Joe Corpora, CSC, ’76, ’83M.Div., Dillon’s priest-in-residence and celebrant of the Milkshake Mass, cleared his throat and brought nearly 300 students to a hush.

Every single one — the ones who arrived early and got a seat, the ones who sat on the ground in front of the altar, the ones on their feet lining every walkway and the ones standing in the choir — turned toward Corpora. “Take a deep breath. Relax,” he began. “Let the cares of the day go by and recall that we are always in the presence of a God who loves us more than we can truly imagine.”

The Milkshake Mass was about to start, but down the hall in the Dillon kitchen, it had already begun. Four Dillon Hall residents were hard at work preparing to meet the post-Mass demand for milkshakes.

“I knew that Milkshake Mass was Dillon Hall’s ‘thing,’ it’s what we’re known for,” Kacey says. “As a freshman, I wanted to be involved in the dorm and I knew that this was something special that the entire campus community attends. It was a good way to meet people, to be involved with Dillon and to help out with this meaningful tradition.”

“It never developed that way,” Doyle joked to a healthy heaping of laughter from the students gathered at 25th anniversary Mass. “It was social from the start.”

Doyle spoke before the liturgy, offering a brief history of the Milkshake Mass, from its humble beginnings with “a good weekday crowd” of 15 to 25 students to a sharp rise in attendance following the attacks of September 11, 2001, to crowds that now regularly exceed 200 students. He credits Corpora for a steady rise in attendance since the priest-in-residence began presiding over 10 years ago.

“I’ve always thought the draw is Jesus, Joe and the milkshakes,” Doyle said.

Then senior choir director Wil Zinkan ’23 took over. Tucked away behind the piano in a corner of the crowded chapel, Zinkan’s voice rose above the rest: “Our opening song tonight is number 694, ‘City of God.’ We will sing verses one and three!”

The chapel filled with music. One hundred and fifty songbooks weren’t enough for everyone, but it didn’t matter. Most knew the songs by heart. Everyone sang with joy and passion.

“We have just one rule: if you know a cool part or a cool harmony just do it. Full send it,” Zinkan says. “We’re not here to make perfect, correct music. We’re here to express ourselves, glorify God, and just make music as joyfully and as freely as we can.”

Corpora credits music for the increase in popularity of the Milkshake Mass. “For my first five or six years, it was maybe 20 people [per Mass]. Then we started to provide music and it began to draw more and more people until today when you have 250 people jammed into the chapel,” Corpora says. “It has become the most-well attended weekday Mass on campus.”

Despite its popularity, Corpora “didn’t know if the Milkshake Mass would ever come back to life” after COVID-19. They kept doing the Mass, but it moved to Stepan Center for social distancing and the congregation dwindled to about 50 people a week.

Dillon students, Corpora says, preserved the Mass. “There were 15 or 20 Dillon guys who just promoted it. Now it’s like there never was a pandemic.”

The effort to maintain the tradition reaffirms its importance to Dillon’s culture. “People on campus know Dillon because of Milkshake Mass, Dillon alums come back just to go to Mass,” Kacey says. “And as for everyone living in Dillon — it would be hard to find someone who hasn’t gone to Milkshake Mass.”

With the final notes of “City of God” lingering in the air, the Mass began just as it always does, in the name of the Father, the Son and the Holy Spirit. It was an ordinary Mass in an extraordinary community.

Nowhere was that more evident than at the sign of peace. As the peace was given, a chaos of hugs, kisses and handshakes broke out. Waves and peace signs were thrown out at people standing across the chapel.

“I will offer a sign of peace to people right around me and then it’s just like ‘Go find random people’ and give a hug, give a smile, just offer the peace of Christ,” Zinkan says. “The joy that is shared in those short 30 seconds is amazing and it speaks a lot to the community and the way that, even if I haven’t met someone yet, I can still go out and share peace, share a special moment with them. That’s something that you don’t find a lot of other places.”

Meanwhile, the milkshake makers were hard at work. Industrial, gallon-sized blenders handle a dozen five-gallon tubs of ice cream and a dozen gallons of milk that Kacey picks up each week.

The signature flavor is Mackinac Island Fudge — vanilla ice cream with swirls and chunks of fudge. Outside the specialty flavor, the process is simple. Ice cream and milk into the blender, mix and pour. Repeat for an hour and a half until everyone who wants a milkshake has one.

“A good milkshake has a nice, consistent pour with no chunks,” Kacey says.

After the final blessing, Zinkan once again called everyone to action. “Our closing song is number 772, ‘Canticle of the Turning!’”

The announcement elicited a cheer for what Zinkan calls “a Milkshake Mass classic.”

Standing at the back of the choir, one singer had a wide grin on his face as he jumped along with the percussion in anticipation of the first verse. And then it arrived, sung louder than any of the previous songs. At the end of the refrain, Corpora’s promise came to fruition as the voices of Dillon’s residents forcefully emphasized the closing lines.

My heart shall sing of the day you bring

Let the fires of your justice burn

Wipe away all tears for the dawn draws near

And the world is about to turn!

As the crowd filed out of the chapel, Zinkan had fun at the piano, playing the Notre Dame fight song, Coldplay’s “Viva la Vida” and Journey’s “Don’t Stop Believin’” to pass the time. Eventually, the crowd moved to the Dillon lounge where Kacey and his team were handing out milkshakes at a dizzying pace.

Sam Van Straten, a junior milkshake maker in charge of pouring, reminded the rest of the team, “It’s important to stay hydrated!” as he took a sip from one of the cups he just filled and passed out another.

That Thursday night was the start of the weekend for many. Music blasted from a speaker in the lounge as the line for milkshakes still stretched to the chapel nearly half an hour after Mass ended. It looked and felt like a party. People took pictures, danced and sang with friends as they enjoyed milkshakes. Thursday Night Football was on in the common room nearby. One guy even took his shirt off in the middle of a dance circle.

“What makes it so popular is that it’s a great mix. People come for the community, it’s a place where hundreds of people from around campus come and gather, but you’re coming for the Mass,” Kacey says. “The milkshakes are separate from that, it’s just a bonus at the end that you get milkshakes and share with the community.”

José Sánchez Córdova is this magazine’s autumn 2022 intern. A junior from Guaynabo, Puerto Rico, he is studying political science, journalism and French, and covers sports for The Observer.