As commencement approached for the class of 2006, Notre Dame Magazine asked our student, intern, Jim Ryan of Dallas, to select a few classmates to represent this year‘s senior class and talk to them about their time at Notre Dame. Here‘s five he picked and some of their thoughts. 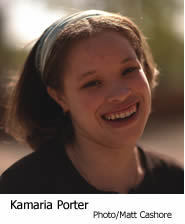 Kamaria Porter, a history major, was the lead organizer for the Campus Labor Action Project (CLAP), a group seeking to ensure that all University employees receive a living wage—the wage necessary to support a family of four while working 40 hours per week. She helped establish a young adults’ organization, Public Action for Change Today, in her hometown of Chicago. Porter also wrote a bimonthly column for The Observer and wrote an article for Notre Dame‘s Journal of Undergraduate Research entitled "Monsignor John J. Egan and Catholic Action against Segregation in Chicago.” Following graduation, Porter will work as a community organizer for United Power for Action in Justice, a Chicago organization committed to improving the lives of the area‘s poor.

The most important thing she learned at Notre Dame:
“Lay vocations, how we’re all charged to build the Kingdom of God. I mainly learned this through a paper I wrote on Monsignor Jack Egan. . . . He was a priest in Chicago really involved in social justice, labor justice, uplifting people‘s human dignity. He got into a lot of trouble but did great work.”

What Notre Dame could do to improve itself:
“I think it could live its own teachings more fully, especially [with regard to] preferential options for the poor and thinking of people who are struggling and are less fortunate in the decisions that it makes, especially in relation to the South Bend community. How does our expansion or our wages or our attitudes and actions affect different people living here?"

What Notre Dame students are blind to:
“Poverty. The concepts we read about in classes—we don’t realize that they are happening right here on campus. We don’t encounter the faces of people dealing with these issues that we put in our heads, like the concept of the working poor. . . . We don’t go beyond the book.”

On the value of a Notre Dame education:
“It‘s a time that you can really focus not just on growing academically, but growing spiritually. Learning skills and tools to build a good relationship with God for the rest of your life is something you can do here that you can’t do at other places.” 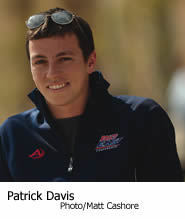 Patrick Davis of Clearwater, Florida, was one of the top distance freestylers in Notre Dame swimming history. He posted the third-best time in school history in the 1,650-yard freestyle, the fourth-best time in the 1,000 and the fifth-best time in the 500. He also excelled in the classroom. Davis, a computer science major, carried a 3.8 cumulative GPA heading into his final semester, and he was a member of Upsilon Pi Epsilon, the computer science national honor society. Davis was Notre Dame‘s nominee for the 2006 Big East Male Scholar-Athlete of the Year Award. Following graduation, he will help design and test software for Microsoft in Seattle.

The most important thing he learned at Notre Dame:
“How to schedule things. . . . You’re more independent and more in charge of what you’re going to do. In high school you have to be in the classroom for seven hours a day.”

Something good at Notre Dame often overlooked by students:
“I think I’m the only person who goes to the library and checks out books for fun. I think most people only go there when they have to do work, and they hate every minute of it and only look at books when they have to. But then again, I’m a nerd.”

On the value of a Notre Dame education:
“When you graduate from here, you have to be well-rounded, no matter what your major is. Everybody knows a little bit about everything. . . . That‘s partly to do with the requirements. Everyone has to do, say, a philosophy requirement. If I were a computer science major at another school, I might never see an Arts & Letters class.”

The most important thing he was involved in at Notre Dame:
“Notre Dame swimming. You end up hanging out with these guys so many hours of the day. You go through the same things together, like getting up really early for morning practice and having to lift on Saturday morning before football games. So you end up thinking of them as your brothers, kind of.” 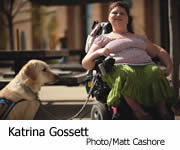 Why she came to Notre Dame:
“I wanted a school that wasn’t too stuffy but also had the academic reputation. I visited an Ivy League school, and it felt like the students didn’t know how to have fun. I got here, and everybody seemed to be having fun but also studying hard. And I like the Catholic community and the athletic environment, because I think it makes [Notre Dame] more friendly than just an academic school.”

What Notre Dame students are blind to:
“I think Notre Dame students don’t recognize the value of the community around Notre Dame. I’ll be the first to admit that I’ve fallen prey to the idea that everybody in South Bend is just a ‘townie.’ But really, that‘s just the bubble attitude that everybody talks about. I think that we’re ignoring the impact that they can have on us, and us on them. Education doesn’t happen in a vacuum.”

Something good at Notre Dame often overlooked by students:
“Cultural opportunities. Every weekend there‘s a play or an opera or a concert or a film or an art exhibit. I feel like a lot of students don’t take those opportunities as they come, and it will be a lot harder once we’re not in college to have these experiences.” 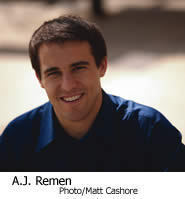 A.J. Remen of San Diego, California, graduated with a degree in architecture. The summer before his freshman year at Notre Dame, Remen was featured in a San Diego Union-Tribune article for designing an expansion to the home of a family friend with a disability. While at Notre Dame, Remen co-founded the Students for New Urbanism, a group promoting the creation and restoration of vibrant, walkable mixed-use communities. He was one of four student recipients of the 2004–2005 Chelminiak Architecture Award, given by Notre Dame for excellence in master planning, teamwork and building design. Following graduation, Remen will work for a small architecture firm in Seaside, Florida.

Why he came to Notre Dame:
“Since I was 7 years old I figured I wanted to go to Notre Dame and be an architect. So pretty much from when I was 7 years old to when I got in, everything I did really revolved around getting in here. . . . There‘s just an energy that‘s unique that I didn’t find at any other campuses that I visited.”

The people most influential to him at Notre Dame:
“I don’t want to single out any one person, just my close friends really. Especially in architecture, we’re kind of a weird bunch. We’re really like a family. The close friends I’ve made in the school of architecture have influenced how I’ve been able to grow not only in architecture but also with my mentality and maturing in that respect.”

On the value of a Notre Dame education:
“As far as the education itself, the skills that you learn here, especially in the school of architecture, are not really taught anywhere else. So we’re a unique group. . . . And that applies to the University as a whole. There are not a lot of schools that have the same kind of requirements that Notre Dame has. So I think every student who comes out with a degree from Notre Dame is going to be a much more well-rounded student, a much more well-rounded individual, and will be able to excel in the future.”

The most important thing he was involved in at Notre Dame:
“Intramural football, because it allowed me to do athletics, to keep school and athletics going rather than doing only school-oriented things. . . . I got to play in the stadium for the championship game and feel the whole team camaraderie all over again, which I thought I was going to lose after high school.” 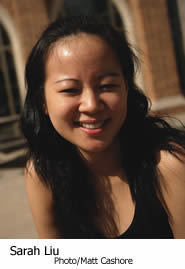 Sarah Liu, an American Studies and Art Studio major. Originally from Taiwan, she moved to New York City when she was 14. At Notre Dame she served as president of the Asian American Association and chair of the Student Senate Diversity Committee. In summer 2005, Liu traveled to Phnom Penh, Cambodia, to work on a summer service project facilitated by Notre Dame‘s Center for Social Concerns (CSC). For the project, she taught classes in English at a university and worked with children suffering from HIV/AIDS at a Maryknoll mission. Liu led a workshop based on her experiences in Cambodia at the Campus Outreach Opportunity League Idealist National Conference at Vanderbilt University last March. Liu was unsure about her short-term plans following graduation but eventually would like to be a professor.

The most important thing she was involved in at Notre Dame:
“My involvement with trying to raise awareness of GLBTQ [gay, lesbian, bisexual, transgender and questioning] issues. I helped found the “Gay? Fine by me” T-shirt campaign. Lots of stuff you’re involved in makes a difference, but it‘s not so visible. The T-shirt campaign was so new and exciting and different from other campaigns, so I feel like it made a difference.”

Something that changed about her during her time at Notre Dame:
“I think the activities I was involved with . . . helped me realize that there is a limit in everyone. That‘s just reality. And sometimes it doesn’t matter how hard you work, sometimes things just don’t turn out how you expect, but that‘s okay, too. I have learned to be okay with failure and to look at things not as a mistake or as a failure, but more like a stepping stone toward something greater, toward success.”