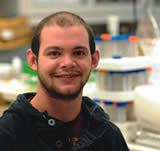 Knee-deep in the streams of southeastern Alaska. Poring over Thoreau in Hesburgh Library. Examining consumer behavior in the marketplace. Monitoring water quality in Uganda. These are all research projects of undergraduates at Notre Dame—and it’s just a sample of the varied topics being examined by students in nearly every field of study.When Associate Provost Dennis Jacobs talks about undergraduate research, he speaks of the “sense of wonder,” “imagination,” and “exploration” that are tied to the pursuit of answers.

Jacobs, a chemist, believes research is a key component of learning—one that can’t be duplicated or fully understood in a classroom. He presides over a University-wide effort to increase undergraduate opportunities for research at Notre Dame, from the sciences to the humanities to the arts.

When students take their place in the world, they often are faced with questions of deep importance to a field and can’t always look up answers in a book. “Our graduates,” Jacobs says, “will be asked to formulate well-educated opinions by piecing together evidence and making arguments.”

The definition of “research” at Notre Dame doesn’t necessarily involve a laboratory or archaeological dig. It’s a broader understanding of research as the systematic pursuit of answers—collecting and analyzing data, synthesizing ideas, constructing an argument and shaping a presentation. Original research and undergraduate education, Jacobs believes, cannot be separated without hurting them both.

Moreover, Jacobs adds, there’s a proven connection between participation in undergraduate research and interest in pursuing a doctorate.

It’s difficult to measure the volume of research being done by Notre Dame undergraduates, since some do research at other universities in the summertime or engage in it for pay rather than academic credit. Jacobs’ best estimate is that 30 percent of undergraduates pursue original research before they graduate.

For four weeks last summer, the environmental sciences major devoted his days in the streams of southeast Alaska, gathering juvenile salmon and ecological data to assess the effects of deforestation on freshwater streams. Funded by a Notre Dame fellowship and a grant from the U.S. Department of Agriculture, Reisinger spent several hours each day hiking and hacking to reach the water from a small cabin where he lived with six other researchers.

He wanted to know if juvenile salmon could be used to evaluate the ecological integrity of streams. After returning to Notre Dame’s Galvin Life Sciences building, Reisinger ground the salmon into a powder to measure the nutrient levels inside them. As he wrapped up his research in March, he determined that salmon can be valuable—though not conclusive—indicators of stream health.

While Reisinger toiled in Alaskan streams, Jamie Grebowski ‘08 immersed herself among undocumented workers at a Catholic parish in South Bend. With a Ganey community-based research grant from Notre Dame’s Center for Social Concerns, Grebowski and two other students under the direction of Kasey Buckles and Abigail Wozniak, professors of economics and econometrics, distributed a 100-question survey to members of Saint Adalbert parish, which has a sizeable population of illegal immigrants. They examined the immigrants’ impact on the South Bend economy and found that the average undocumented worker contributes more than $3,000 a month to the community.

“We have no way of knowing how many undocumented workers are in the city, but based on [our] estimates they could be contributing 2 million to 10.5 million dollars monthly,” Grebowski says.

“We’re hoping that local policy makers will see these numbers and take them into account when they are legislating,” she says.

Reisinger, Grebowski and more than 200 other undergraduates presented their research at Notre Dame’s first Undergraduate Scholars Conference on May 2. Their projects, featured through posters and presentations in DeBartolo Hall and the Jordan Hall of Science, were as vast and varied as the areas of study at Notre Dame.

Grants and gifts
Students who need financial support for their research may apply for grant money from several academic centers on campus. Typical projects cost anywhere from a few hundred dollars to a few thousand, depending on where the research is done, what materials are required and how long it lasts. One source of funding is the President’s Circle, the University’s top donors, which has allocated money to support the Undergraduate Scholars Conference and underwrites the research travel and conference fees of an additional 15 to 20 students.

As assistant director for undergraduate research in the Office of Research, Cecilia Lucero’s job is to promote this kind of scholarship and help students who are not getting academic credit to find funding for their projects. That could mean working with University-based programs such as the Undergraduate Research Opportunity Program (UROP), Learning Outside the Classroom or the Kellogg Institute for International Peace Studies, or such outside sources as the National Science Foundation. If students are resourceful, Lucero says, they can piece together enough money to fund an entire project.

“They have to do the legwork and find funding from different sources,” says Lucero. “They have to figure out how much it will cost them to conduct their research. . . . The whole process is about looking for funding.”

UROP, for example, provides summer fellowship grants up to $3,600. The Kellogg Institute and the Nanovic Institute for European Studies provide money for research abroad. But funding is limited. The Spirit of Notre Dame campaign is seeking named endowments of $100,000 or unrestricted gifts in any amount to support UROP research grants, which are becoming increasingly popular among students.

In the College of Science, 16 percent of students engaged in research for academic credit last fall, according to the official count. But in an online survey that asked undergraduates if they had participated in any form of research—including off-campus and for-pay—40 percent said they had.

“Because we have undergraduates here who are excellent—many of these students are going to Notre Dame peer institutions or better to pursue graduate degrees—clearly they could make an important contribution to Notre Dame as an academic institution,” says Dominic Chaloner, the college’s undergraduate research coordinator.

Many science undergrads want to research cancer or infectious disease, Chaloner says, because they know someone affected by them. He reminds students that finding a cure can include research into a variety of seemingly unrelated or distinct topics. “It’s about understanding the process leading to cancer. You’re building knowledge [so] that one day we might find a cure,” he says. “Part of doing research is realizing you are part of a bigger endeavor that will lead toward that aim.”

Opportunities aren’t limitless. Most professors can take on no more than two or three students per semester to assist in research.

One solution, associate provost Jacobs says, is for students to work in teams on interdisciplinary problems or projects, an approach that works best in the sciences, social sciences and engineering. “When they work, I think they work exceedingly well because students learn so much from one another.”

Students who conduct research in the College of Science seem to come from two camps: pre-medical students, who are doing research to prepare for medical school applications, and Ph.D.-bound students, who use the lab as a training ground for their research careers. Faculty generally favor the latter, Chaloner says, since doctoral-bound students are more likely to commit consecutive semesters to research.

But medical school is more popular with science undergraduates, about 55 percent of whom intend to become physicians. Indeed, Notre Dame lags behind its peers in the number of graduates who pursue doctorates, according to Jacobs.

Approximately 5 percent of Notre Dame graduates go on to receive a Ph.D. At the nation’s other top 20 universities, the mean is about 8 percent. Princeton sends nearly 14 percent of its graduates on to earn doctorates.

A Notre Dame survey administered to alumni 10 years after graduation revealed that students who went on to earn a Ph.D. were three times more likely than their peers to have participated in undergraduate research. Also, they were much more likely to say their decision to pursue a doctorate was influenced by a faculty member.

“These factors are not unrelated. One fruit of the undergraduate research experience is developing a close relationship with a faculty member,” Jacobs says.

Jacobs believes that, “research, inquiry and exploration” should be the model for the whole University.

“It’s what we do,” he says. “It’s our calling, to gain a deeper understanding of our world, of one another, of the divine. And we do that most authentically by exploring questions.”

Mary Kate Malone was a spring 2008 intern at this magazine and is a summer intern at the Pittsburgh Post-Gazette.