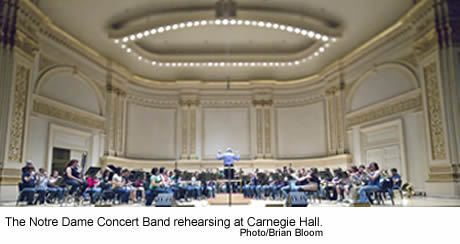 On stage at Carnegie Hall before that evening’s concert, trumpeter Andrew Thomas ’11 looks out on the five-tiered hall, with its plush red seats and ornate gilded moldings. He’s seen a film clip from Benny Goodman’s famed 1938 big-band concert at the hall, and tonight he’s on stage with another really big band — the Notre Dame Concert Band.

Then he plays a solo from Joseph Turrin’s “Fandango,” his clear notes reverberating through the hallowed concert hall.

“The sound really carries here,” says Thomas. “It’s like the ghosts of performances past are going to be playing with us.”

Hours later, Thomas strides out on stage before more than 1,600 listeners. He’s spiffed up in his tuxedo and prepared for the concluding performance of the band’s five-day tour, with stops in Cortland, Ohio; Easton, Pennsylvania; Suffern, New York; and Ramsey, New Jersey.

It’s the end of an era for the seniors — from Notre Dame, Saint Mary’s and Holy Cross — many of whom met at band camp before freshman orientation and were selected to play in the Notre Dame Marching Band and, later, the concert band. Few in the band are music majors, but all have built their college years around music — with countless rehearsals at the Ricci Band Rehearsal Hall, performances at the DeBartolo Performing Arts Center, and halftime performances, for many, at Notre Dame Stadium.

They’ve also brought their music into the community, with 90 members of the band program, including trumpeter Tony Pawlicki ’10, teaching music in South Bend parochial schools.

For Michael Koehler ’10, a drummer who began playing in fifth grade in Pickerington, Ohio, the May 11th concert at Carnegie Hall caps four years at South Bend, where he juggled rehearsals and performances with his engineering studies. He’s one of nine percussionists on stage in Manhattan.

“This is the culmination of everything,” says Koehler, scheduled to begin work with Westinghouse Electric’s nuclear power division after graduation. “I can’t quite believe that we are all here.”

Neither can JoAnne Thomas, who traveled to New York a few days earlier from Fridley, Minnesota, to watch her trombonist son, Matt, a chemical engineering major who would graduate the following week. She sits in the first tier Box 59, a few seats away from Regis Philbin ’53, the daytime television personality who will direct the concert’s finale — the “Notre Dame Victory March.”

“I remember encouraging my son to join the band when he was a freshman,” says Ms. Thomas. “It seemed like a way he could find his niche and adjust to college life.”

The Carnegie Hall appearance stands as a defining moment for the concert band, which features woodwinds, brass and percussion. The group was founded in 1845 and is the nation’s oldest collegiate band in continuous existence. While the band has toured internationally, appearing since 2002 in such places as Scandinavia, Australia, Austria and China, this was its debut in Carnegie Hall, the renowned performance space where many aspiring musicians one day dream of playing and where autographed musical scores by composers Antonin Dvorak, Philip Glass and Aaron Copland hang from its walls.

Band director Kenneth Dye, beginning his 13th year in South Bend, dreamed of conducting in Carnegie Hall as well. So the entrepreneurial conductor, who has a master’s in business administration as well as a doctorate in music, found an open date on Carnegie Hall’s spring calendar. Then he put together an ambitious program that showcased Notre Dame’s music faculty conductors, two alumni singers and trumpeter Philip Smith from the New York Philharmonic Orchestra.

“I was watching a movie of Benny Goodman’s 1938 concert here and wondering if we could do it,” Dye says. “It’s like the Super Bowl for music groups. And there’s no football, no timeouts and no bad weather. It’s just us and Carnegie Hall.”

Dye warned the musicians that there was “more bounce” to the sound at Carnegie Hall. And the sound certainly resonated in the eclectic program. You could hear the richness of the brass in the concert’s opening piece, “Fanfare and Prelude,” a world premiere by Joseph Turrin, with Dye using his whole body from the conductor’s podium to urge them on.

Baritone Stephen Lancaster ’05M.M., on Notre Dame’s music faculty, sang an aria from Puccini’s opera Edgar, conveying the intense pain of unrequited love. And Joanna Batt ’08, now writing a kids’ column for Time Out Chicago, came to reprise her sultry version of the 1941 jazz classic “When the Sun Comes Out,” which she sang throughout her undergraduate career. The tune, created in the big-band era, takes on new meaning with the concert band providing a wall of sound behind her.

When the band plays Turrin’s “Fandango,” trombonist Anthony Parrish ’10 and trumpeter Smith trade solos, then step back as the melody flows from the clarinets to the flutes to the trombones, and back to Parrish and Smith, who lead the band to a final triumphant coda that envelopes the hall.

A hint of nostalgia underlies the program’s second world premiere, “Siorai September,” by Samuel R. Hazo. The piece was commissioned by the band and inspired by a poem written, and recited that night, by Hazo’s father, Samuel J. Hazo ’49. The poem captures the elder Hazo’s impressions of South Bend each autumn, when students return, as sailors come back to port, and find their home once more.

The concert includes a bit of choreography, too, as 12 musicians in Notre Dame’s New Orleans Brass Band parade down Carnegie Hall’s parquet level like they were on Bourbon Street for a funeral march, playing “What a Friend We Have in Jesus.” Up on stage, the brass band stands in a line, belting out “I’ll Fly Away,” a tune that features trumpeter David Condon’s rollicking solo.

Condon ’10, who will enroll in Albany Medical College in September, says Notre Dame provided the opportunity to pursue his passion for music while laying the groundwork for a career in medicine.“I’ve learned that you can pursue many dreams at once,” he says.

The concert’s final tunes — “Notre Dame, Our Mother” and the “Notre Dame Victory March” — turn staid Carnegie Hall into an impromptu pep rally, with the entire audience standing to sing and clap along as Philbin leads the band.