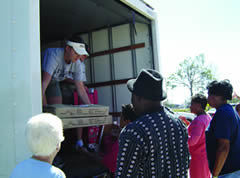 Like its counterparts nationally, the Notre Dame Law School offered visiting-student status to second- and third-year students from the ravaged area. The Law School enrolled two students from Tulane University in New Orleans, both of whom had attended Notre Dame as undergrads. Additional students were accepted into Notre Dame Law, but they decided to attend schools closer to home, said Gale Peshel, assistant dean for students.

A few undergraduates from Tulane and Xavier enrolled at Notre Dame temporarily. They had all previously attended the University under summer exchange or internship programs. Most were expected to return to their home universities spring semester.

Twenty-two Notre Dame students spent fall break helping in areas devastated by the storm. Graduate student Rebecca Chimahusky, pictured above passing out boxes of clothing and other supplies, organized a group of seven students that began the fall break week distributing donated goods at a Catholic church in Hattiesburg, Mississippi. They later helped clean up homes whose owners were unable to handle the work themselves. Students said they hoped to return over spring break.

Also during fall break, Stanford Hall senior Jeff Mullin led a group of 15 students, mostly residents of his hall, to Pascagoula, Mississippi, hometown of one of Stanford’s former resident assistants. The former RA now works in the Alliance for Catholic Education program in Pascagoula. While there the students helped repaint the exterior of Resurrection Catholic High School and make the interior fit for classes to resume.

Collections taken at the first home football game and during Masses in the dorms and the Basilica went to Catholic Charities, the Louisiana ministries of the Congregation of Holy Cross, and Alliance for Catholic Education host schools in the South. Various departments on campus also donated office equipment, computers and clothing.