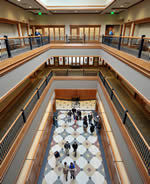 Saint Thomas Aquinas defined law as “a certain ordinance of reason for the common good” advanced by the person who has the care of the community. Designed as a common ground for people and ideas, the new Eck Hall of Law, Notre Dame’s law school addition, opened its doors on Jan. 5 and is already proving itself to be a place suited to a notion of justice founded on individual rights and reason and communal welfare.

The building itself has been literally united with the original Notre Dame Law School building, which will be called Biolchini (bee-ol-KEE-nee) Hall when it reopens next year as the home of the law library. The bridge that joins the two structures is a grand archway that encloses a large, daylight-drenched room called the Eck Commons. It is already attracting large crowds of students, faculty and staff to Crossings, its new café.

“This is a space for our whole community,” says Associate Dean William Kelley, the school’s liaison for the construction project.

When plans for the law school expansion were launched to address overcrowding problems nearly a decade ago, Dean Patricia O’Hara ’74J.D. and other leaders wanted to honor the school’s status as a prestigious landmark on the Main Circle. The mandate for the design, Kelley says, was “to keep the law school where it was, at the heart of the campus — and to have an integrated facility.” The idea of Eck Commons and its archway arose from the goal of keeping student traffic — not to mention gameday’s marching musicians — moving freely at this crossroads between South Quad and DeBartolo Quad.

The concept of an evolving teaching-learning community is evident throughout the design of the Eck Hall of Law, the work of the S/L/A/M Collaborative architecture firm. Each of the three above-ground floors combines classrooms and offices. The new courtroom, an inevitable centerpiece of any law school — though moot court convenes infrequently — is ingeniously designed with two-story movable walls that can conceal the judge’s bench and witness stand and convert the space into a large lecture hall.

The new chapel, easily accessible on the ground floor of the archway structure, will hold as many as 70 people — almost 50 more than its predecessor. “As a priest who celebrated daily Mass in the old chapel for the past six years, I felt a certain sorrow to see it pass,” says Rev. John Coughlin, OFM, the Franciscan scholar who teaches canon law and ethics. But Coughlin predicts the new chapel, with its three major stained-glass windows depicting Mary, the Eucharist and Saint Thomas More, patron of lawyers, plus smaller invocations of Aquinas, Saint Augustine and the Congregation of Holy Cross, will be “an even more suitable place” to gather for prayer. “It will be an opportunity for increased grace for many,” he says, “and the law school community as a whole.”

The sense of integration extends to the building’s exterior. Cast stone panels found around Eck Hall express in symbols or words fundamental principles of law handed down from Anglo-American tradition and Church teaching. You’ll find not only the scales of justice, but classically lettered tributes to ratio, or reason, to caritas, or charity, and to misericordia, or mercy, among others. While laptop-tapping students grapple with those principles in their classrooms, the stones outside proclaim that this is a Catholic law school endeavoring, in the words of Dean O’Hara, “to bring about the kingdom of God.”

No matter how well the whole Law School expansion project is coming together, it’s only half complete. Due in June 2010 is the opening of a thoroughly renovated Biolchini Hall, named for benefactors Robert F. Biolchini ’62, a trustee and Tulsa attorney, and his wife, Frances, which will house the Kresge Law Library plus some administrative and student offices.

“Some places might have facilities as good as ours, but for a university our size, it will be hard to see a law school with better facilities,” Kelley says. The new building is named for the late Frank Eck Sr. ’44 of Columbus, Ohio, whose $21 million gift is the largest the law school has ever received, and for whom are named other major campus landmarks and projects such as the Eck Visitors’ Center and the Eck Institute for Global Health. A formal dedication is scheduled for May 1, before O’Hara’s retirement as dean.

In the meantime, the virtues of a community of individuals striving for the common good are expected to flourish, and it is hoped that another virtue will continue to mark the expansion project. During the 18 months thus far of congestion, construction noise and inconvenience, “people have been remarkably patient,” Kelley says. “We’ve had very few complaints.”

Perhaps that’s where the caritas and misericordia come in.

William Schmitt is writer/editor in the Notre Dame Office of Public Affairs and Communication.
Photo of the Eck atrium by Matt Cashore.