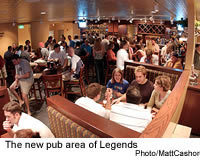 The former Alumni Senior Club (aka Senior Bar) reopened this fall as a combination restaurant, pub and nightclub known collectively as Legends of Notre Dame.

Located in the parking lot south of the stadium, the facility closed after the 2002 football season for renovation and an L-shaped addition that increased the building’s size by about 50 percent.

The 156-seat restaurant is decorated with photographs and memorabilia related not only to Notre Dame athletics but the school’s other traditions. The menu features a wide variety of entrees including a Mediterranean salad with a sizzling skewer of souvlaki, hamburgers (one made of bison meat), a Hawaiian tuna steak, ribs, broiled salmon and filet mignon. Prices are in line with typical casual-dining chain restaurants.

The pub stocks a large selection of wine, dozens of varieties of bottled beer and has on tap popular Irish brews like Guinness and Harp along with “Legends Own” beers from Indiana micro-breweries.

The nightclub plans to feature live acts Thursday, Friday and Saturday nights from 9 p.m. to 11. A disc jockey will play recorded music from midnight till 4 a.m.

The restaurant and pub are open to the public. The nightclub is open to all members of the greater Notre Dame/Saint Mary’s/Holy Cross community — including alumni and their guests. But the entertainment will be geared toward traditional college-age audiences.

Anyone who wants to purchase or drink alcoholic beverages — even people decades beyond the legal drinking minimum — must show proof of their age at a desk out front and be issued a wristband.

The entire facility is smoke-free.