The 18-month-old boy named Tiisetso weighed 6 pounds, struggled to breathe and was covered in sores. His legs were pencil-thin. My friend, a local government social worker, told me she had found him in an old grain hut. He was sitting alone in the dark, shivering. She was told that he survived on scraps of food tossed to him by his 4-year-old cousin. His neighbors reported that they would hear him outside on cold rainy nights, left there by his uncle to die, only to find him huddled, whimpering, against the hut wall the next morning. 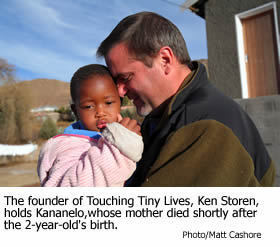 I live in Lesotho, a small mountainous country in southern Africa. Almost a third of its adult population is infected with the human immunodeficiency virus (HIV), according to United Nations estimates. The government of Lesotho calculates that more than 100,000 orphaned children live in the country of 2 million people. Tiisetso was one of those orphans.

My friend and I didn’t think he would make it, but we spent the next three days and nights keeping a constant vigil over him. We fed him and held him, wanting to make his last days comfortable. We wanted Tiisetso to know he was loved. Then his strength, gallons of baby formula and some cheap antibiotics brought about what seemed to us a miraculous recovery.

I came to Lesotho with the Peace Corps in 1999. I stayed here when that assignment ended in 2002 to work for the Near East Foundation to help children orphaned by the disease. Although we heard reports of massive amounts of resources showering down from various sources to fund treatment programs and awareness campaigns, the money seemed to evaporate before it hit the ground. I started to become bitter, hearing stories of children dying from malnutrition and illness on a regular basis and seeing little being done to care for them.

The amazing recovery of Tiisetso gave me new hope. I decided to open my home to children who suffered from the effects of HIV and from the deaths of their parents. In May 2004, a few volunteers and I began taking in such children. We were determined to start something that focused entirely on providing direct care and love to our babies, making sure that every ounce of our energy, every bit of our love and every dime we could scrounge would go to support them. I scrambled to contact friends and family to ask for help to support our babies. The response was tremendous. Touching Tiny Lives was born. 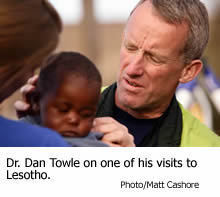 That same month, I received a note from Dan Towle ’77, a physician in Kansas City, Missouri, who had read an article I had written for Notre Dame Magazine’s winter 2003–04 issue about my experiences in Lesotho with HIV and its victims. In his words, he wanted to offer his “time, talent and treasure” to assist us in our work. His tireless efforts, and those of the many people both from the Notre Dame community and in the community at large, reignited my faith in our capacity for good. To me, the spirit of service and generosity illustrated by people like Towle, alumni supporters and student volunteers embodies the true spirit of Notre Dame.

Tiisetso is now a healthy 4-year-old with a heartbreaking smile. He was recently adopted by my friend, the social worker. Since the inception of Touching Tiny Lives, we have provided love, care and support to more than 60 infants with critical needs through our place of safety and rural outreach program. We hope to offer medical services for children in desperate need and to expand our mother-to-child transmission prevention program. Still, we have a long way to go.

Even in the midst of the HIV pandemic I see hope in the eyes of the children we serve and in the tears of grandmothers who are reunited with grandchildren. That hope is fueled by the knowledge that we have loved and cared for children in their last days and by the love of people around the world whose generosity seems boundless. All of us work to save one child at a time because we believe that every child is the most important child in the world.

Ken Storen and his wife, Colleen, live in Mokhotlong, Lesotho, where they operate Touching Tiny Lives.