As Tam crossed in front of me, I glanced down at what was on her tray: a slice of pizza.

Where’d she get that? I wondered but was too embarrassed to ask. Besides, she wasn’t breaking stride heading back to our table.

It was about 1 o’clock in the afternoon and we were in the North Dining Hall, not my usual place to have lunch. My usual place is at my desk in Grace Hall, eating a spinach salad and trying not to spatter fat-free French dressing on the galleys I’m supposed to be proofreading. 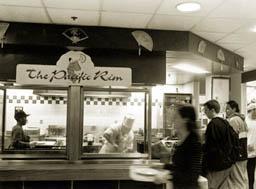 Tam is Tam Bang Ngo, a first-year student (what used to be called a freshman) from Hawaii. The Office of Multicultural Student Affairs paired us up fall semester under its mentoring program for minority students. Tam’s parents are from Vietnam. She has a notion of pursuing a career in journalism. I presume my role is to make accounting look good.

As an incentive for us to get together, my lunch was to be on the tab of Multicultural Student Affairs. Through the magic of computers, they’d credited a meal onto the magnetic strip of my employee ID, so like the hundreds of students filing into the North that day, all I had to do was hand over my card at the entrance, have it swiped, and proceed into the cafeteria to eat whatever I wanted.

And therein lay a problem. When I crossed paths with Tam near the salad bar I’d just come through the food line and didn’t have much to show for it. My congenitally high cholesterol had guilted me away from the hot dogs, hamburgers and fries, and refried beans remind me of dog food, so the Fiesta Grande counter was out.

I was still wondering where Tam had gotten that pizza (lipids be damned!) when I turned and looked back in the direction from which I’d come. It was then I realized that I hadn’t gone through the food line, I’d gone through one food line. I carried my tray back into the next entryway down from burgers-and-tacos area, and over the next several minutes got an education in something that, as far as I know, is not described in any Notre Dame recruiting materials. It should be. It’s this: Today’s students eat like kings.

As I roamed among counters and kiosks and islands, here’s _some of what I found: Polish sausage, kluski noodles and whipped potatoes at the Homestyle Favorites counter: sliced ham, turkey, roast beef and salami, along with provolone, American, Swiss and cheddar cheeses at the Mario’s and Luigi’s delis; pierogis (it was a heavily Polish day, I later found out), rice pilaf, baked potatoes, spinach and green beans at Marketplace Square; and the predictable elongated fare at the Sub Station.

Out at the condiment bar, a continent unto itself, my eyes lit up at oatmeal and parmesan breads baked golden brown in round crusty loaves from which I could carve as shamefully thick a slice as I wanted. Or walk off with the whole loaf, I suppose.

I eventually found where Tam had gotten the pizza, in the final food line, the Pastaria. There were five kinds of pizza along with four varieties of pasta with four different sauces, plus baked pasta dishes and soft breadsticks. And if that was frozen pizza then the guys I saw around the corner tossing dough in the air were staging a convincing diversion.

In an effort to be at least nominally cholesterol-conscious, I docked my tray at The Pacific Rim, confessed to being a stranger in these parts and asked what to do. Simple. Load up a plate with the different kinds of appealing oriental vegetables then the chef in the two-foot hat would stir-fry them with my choice of beef or chicken in my choice of a garlic or spicy Szechuan sauce. I picked the poultry and the garlic-ginger sauce, but the chef wouldn’t hear of it. He insisted I try the Szechuan. “When you get that little extra jolt of energy this afternoon, I want you to remember where it came from,” he said jovially. I smiled and hoped he didn’t mean methane.

While the stir-fry guy did his thing with my chicken and vegetables, I was motioned down to the far end of the counter.

“Wrap or rice?” a woman asked. At my puzzled unresponsiveness, I’m sure the eyes of the students around me were rolling heavenward. As I’ve since learned, the expression “wrap or rice” is as familiar to today’s Notre Dame students as “paper or plastic” is at the grocery store. The red-bearded yokel — me — had to have it explained. You get to choose whether to have your stir-fry served over rice or folded into soft, tortilla-like “wrap.” I picked the rice.

About a half-hour later, after the largest lunch I’d eaten in months, I bid Tam good luck with her classes and wandered back to the food lines to see if I’d missed anything — out of curiosity, mind you, not to reload. Noticing my pen and notebook, North Dining Hall staffer Olga Rocha agreed to play tour guide.

The reason there are two delis, she explained, is that one specializes in bagel sandwiches. Those atomic calorie bombs? They’re called Hello Dolly bars. Yes, I had noticed in the main dining hall the salad bar the size of a volleyball court, but, no, I hadn’t seen the Italian salad bar in a separate room on the north end of the building. This one turned out to offer, among other surprises, sardines. On the condiment island, I now noticed tofu and hummus — not that I know what to do with either. You want coffee? (I don’t.) Take your pick: vanilla, hazelnut, amaretto, kona (regular and decaf) or Irish cream. Tea? Earl Grey, Cinnamon Stick, Raspberry Royale, Lemon Lift or Plantation Mint.

I later learned that this was an off-day at the stir fry station. Normally there aren’t two sauces to choose from, there are five. Students also have a choice of four varieties of frozen yogurt daily, not counting half-and-half “twists.” There are 11 salad dressings. And over the course of a year, a patron of the dining halls will see 20 different kinds of cheesecake.

At breakfast, instead of the create-your-own stir-fry, students can get omelettes made to order. At any meal they can make their own fresh waffles on their choice of irons that imprint either an ND monogram or the Fighting Irish leprechaun in the center of the batter lattice. On football Saturdays, dinner is by candlelight with linen tablecloths, fresh flowers and ice carvings. At the annual Christmas dinner, just before finals, they serve prime rib.

Creative surprises show up several times a year. Olga told me that on Groundhog Day, for reasons perhaps known only by upper management, the traditional beef hamburgers were supplemented by varieties made from turkey, vegetable matter and buffalo.

As I walked away from the North Dining Hall I tried to think of a kind of food that wasn’t available. I didn’t see any borscht. But I decided that the most amazing thing about the food in the dining halls these days isn’t the incredible variety.

It’s that you still hear students complain about it.