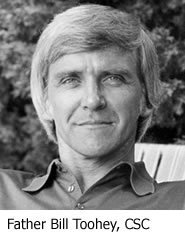 The USC football team came to South Bend in October to play the Fighting Irish, and 45,000 fans showed up in Notre Dame Stadium for . . . the Friday night pep rally.

Any doubt that the new coach had had a seismic impact on the sweeping cultural phenomenon that is Notre Dame football was dispelled that electric evening. Those who saw the next day’s game were treated to one of college football’s most dramatic climaxes in recent memory—and further evidence that something special was taking place this fall. Notre Dame football was back. And for a school that derives much of its identity from the fortunes of its football team, it’s been a grand revival indeed.

Beyond the team’s success, one of this autumn’s best storylines was that Charlie Weis ‘78 showed an understanding of and respect for the traditions of this sport at this University. For all his considerable expertise at managing a game and motivating players, the coach’s grasp of the nuances, place and character of Notre Dame football did as much to stoke the fires of the appreciative Irish faithful.

While the football resurgence received most of the attention, there were other autumn celebrations of the life and legacies of this place, from the inauguration of a new president to the 65th birthday of Jean Lenz, OSF. Sister Jean, longtime Farley Hall rector, vice president for student affairs and one of Notre Dame’s great people, received a warm embrace from generations of Notre Dame women with whom she shared the early days of co-education, the exploits of hall life and the intimacies of growing up among friends as close as family.

But something else occurred last fall that spoke of Notre Dame and its traditions, of its people and of a love shared. And it went unnoticed by many.

On October 23, on a Sunday afternoon eight days after the USC game, about 90 people gathered in Holy Cross Cemetery at the grave site of Bill Toohey, CSC. A quarter century had passed since the 50-year-old priest died suddenly and tragically of encephalitis.

Bill Toohey ‘52 had been head of Campus Ministry from 1970 until his death in 1980. He had written several books and a weekly column in The Observer, but it was the power of his person that moved people. He was not a large man, but good looking, with brilliant blue eyes and thick, silver-gray hair. Who on campus did not know who he was, did not know he exemplified Catholic activism in an era of earnest and faith-filled engagement?

A passionate player in a post-Vatican II, change-the-world America, Bill Toohey was in many ways a man of his times. A charismatic leader on a campus resounding with energy, hope and idealism, he called others to work for justice and peace. He led grape and lettuce boycotts on behalf of migrant workers, civil rights rallies for the oppressed and marginalized, and peace demonstrations in protest of the war in Vietnam.

A dynamic homilist, his 12:15 Mass in Sacred Heart attracted throngs of students, faculty and staff. He drew students and friends to residence hall Masses and to ardent Friday afternoon discussions at Bulla Shed, a hangout on the eastern edge of campus. A former U.S. Marine, he led a Thursday morning handball group whose competitiveness and camaraderie engendered deep friendships among students and other Holy Cross priests.

That 90 people would come for the 25th anniversary of his death is testimony to the impact he had on others. On a day that was cool to cold, with light rain giving way to warm glimmers of sunlight, Tom Stella ’67, ’70M.A., Adrienne Coffin ’81, Charlie Bathon ’77, ’84MBA, and Jim Gresser ’75, ’80J.D., led the gathering in song, as they had done 30 years ago at the 12:15 liturgy in Sacred Heart. John Fitzgerald ’65 provided the welcome, Rev. Tom McNally, CSC, ’49 led the prayers and Brother Joe McTaggart, CSC, ’71M.A., read excerpts from Toohey’s last prepared homily (that had been delivered by Fitz while Bill lay dying in the hospital). Memories and tributes were expressed, and Jay and Pat Dolan hosted a dinner afterward.

“For me,” wrote Jane Pitz ‘72MFA, the former Walsh Hall rector and a close friend and colleague of Bill Toohey’s in Campus Ministry, “it was a re-membering—a bringing together of many individuals into a prayer and time that bonded us together. The songs we sang, the thoughts we shared, the words of Bill’s we heard, all brought us into a circle of communion.”

“Bill instilled a sense that all of life is a liturgy,” wrote Joe Cosgrove ‘79.

"Let’s not forget," suggested Sheila O’Brien ‘77, ’80J.D., now a judge in Chicago, “what a huge football fan Bill Toohey was.” Her message, posted on the day of that Notre Dame-USC game, continued: "Where would he be today at this moment? Working for peace and justice? Nah. He’d be sitting in the corner of that press box with his binoculars where he sat every home game, and loving every minute of it. The man loved Notre Dame football."

The essential beauty of Notre Dame, I think, is its people, and the variegated dimensions of their lives, and the various rituals that bring us together—in play and prayer and service. It’s always good to be mindful of those bringing new gifts to the place as well as those who have gone before.