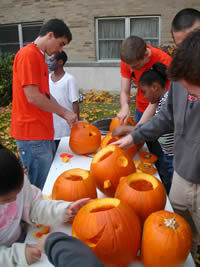 For more than 10 years Keenan Hall has hosted its signature community-outreach event, The Great Pumpkin. It’s an opportunity for underprivileged children in and around South Bend to come to campus and enjoy all the typical Halloween activities in a fun and safe environment. The dorm’s residents set up a haunted house in their basement and some pumpkin-carving stations. They escort the kids around campus to trick-or-treat at the other residence halls. The little kids seem to love it—and so do the big kids.

This year’s Great Pumpkin took place the Thursday before Halloween. Throughout the afternoon, groups of youngsters arrived at Keenan and were greeted by volunteers in orange jack-o’-lantern T-shirts. Some of the children were in costume; others had on the clothes they’d worn to school. All were swinging empty bags, ready to start collecting.

Soon the kids broke off into smaller groups and were sprinting across the quad yelling in excitement. The Keenan guys jogged close behind. I couldn’t help but notice the contrast between hosts and guests: the college guys, big, athletic, Caucasian, most of them the products of financially comfortable suburban families; the little local kids, almost all African Americans and likely from struggling households. Even among those wearing costumes, it was obvious that scant money, let alone little time and planning, had gone into the day’s wardrobe.

None of that seemed to matter. The idea was to show these kids a good time, and that’s exactly what they were having. At a pumpkin-carving station, a boy held his carved creation triumphantly over his head. One of the volunteers listened attentively to a little girl’s long, elaborate tale about why she chose her unrecognizable costume. Her Keenan escort responded with exaggerated exclamations of “No way” and “Are you kidding me?” As the groups traveled between dorms, leaf fights would break out; kids and volunteers pelting each other with handfuls of autumn red and gold.

An event like this is where the guys show a different side of themselves than what I see on campus each day. Not the beer-drinking, sports-loving, smooth-talking “cool guys.” Not the rowdy guys slapping high-fives after an Irish touchdown or criticizing the coaching strategy after a turnover. Not the eating machines who pile their plates so high on “wing night” in the dining hall that one would think it was their last meal. Not the obsessive body builders who pump iron with the most excruciating expressions on their faces and then strut around looking proud of themselves.

At The Great Pumpkin I saw gentle, caring, whole persons, the epitome of the “Notre Dame Man” one sometimes hears alumni talk about. Fear not, alumni, the species is alive and well. Most of the guys, as well as girls, who come to Notre Dame share a history of service to their communities and a commitment to caring for others. These guys like fun times but care just as much about others. The majority of the Keenan volunteers, for instance, also participate in after-school tutoring programs and other community service groups such as Big Brothers/Big Sisters. Many go off campus once or twice a week to volunteer.

You can get various impressions of Notre Dame guys depending on the setting and time of day and the beverages at hand. I think maybe they show their truest colors out on the North Quad around Halloween, getting beaten in leaf fights by people half their size.