“Have any of you ever worked in sugar cane fields? I have, and it is hard work. Education is everything.” I suddenly feel foolish. Sitting stiffly in a jacket, skirt and heels, I shake my head at his question. We all do. No, I have never even seen a field of sugar cane.

The eight undergraduates at breakfast are fellows in the Tocqueville Program for Inquiry Into Religion and American Public Life. Supreme Court Justice Clarence Thomas is teaching at the Notre Dame Law School for a week, and he agreed to meet us before his class.

We are daunted, to say the least. 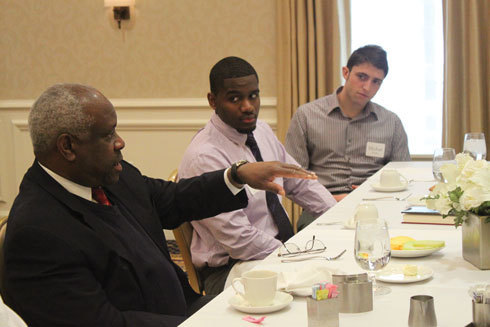 As we introduce ourselves, he listens and politely asks questions. Although his pacing bodyguards continually remind us of his importance, we are comforted by his gentle attention and deep, melodious voice.

In between plates of eggs and pancakes, the table is peppered with our copies of his autobiography, something that makes us feel a bit uncomfortable once he tells us how little he cares for the book. After reading his memoir, I expect to meet the angry man who endured a contentious and racially charged confirmation to the Supreme Court in 1991, but someone very different now sits before us.

As breakfast conversations are wont to do, ours roams pleasantly from his love of Nebraska (“I cheer for Nebraska in everything . . . bowling, volleyball. . . . They are wonderful people.”) to the Affordable Care Act to his Catholic faith. Although we laugh frequently, the conversation occasionally becomes serious. “The smartest man in the world has about 1 percent of all knowledge,” he says, “and yet people want to rely on one man in Washington to solve every problem. But what about the hunter who knows every secret of the backwoods? And the fisherman who knows the paths of each local stream? We all know a little, and no one knows much at all. Humility is everything.”

As he finishes his eggs, he describes the grove of pines in which his Virginia home is situated. “They’re very tall and straight, but they have shallow roots. Whenever the wind blows, one comes down. College is a time free of distraction when you can read and grow deep intellectual roots. Without those, you won’t make it when the wind blows.”

I think of the hours I have wasted during my four years at Notre Dame, the books I failed to read. The other students and I share sheepish glances. We take so much for granted.

Thomas has come a long way since college, too. He once joined an angry political riot that occasioned police clubs and tear gas. In the hours of sober self-disappointment that followed, he stood before the Blessed Sacrament and promised never to be manipulated again.

There has yet to be a riot in my time at Notre Dame — we prefer the safe battleground of Observer viewpoints — but we allow ourselves to be manipulated in quieter ways. We are afraid of failing to be attractive, athletic, articulate and bound for success. We are afraid to live intentionally with focus, faith and humility.

Like many students, I often wake early, fumble into running gear and hit the trails. Justice Thomas surprises us with a reminder. “You don’t expect to lose your good health. You expect to wake up each morning and run six miles. But that can be gone overnight. You cannot be self-absorbed.”

When asked how he handles the fierce criticism he receives for his conservative judicial decisions, he shrugs his shoulders. “Let it roll off. It’s not important.” In his office, a sign above the coat rack reads, “Hang Egos Here.”

To my surprise, he says he even disliked writing his autobiography. “I became tired of thinking so much about myself. I wrote it only to clear the record for those who have given me so much. I had an obligation to them.” I begin to see how he rose from rural Georgia to the Supreme Court. His eyes are fixed on something higher than himself.

Elizabeth Argue, a senior majoring in political science, is from Rochester, Michigan.