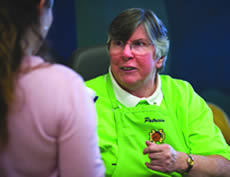 I give her a skeptical look, and we both crack up.

When the magazine offices were in the Main Building, two words were the lifesaving mantra we used when one of our computers misbehaved: “Call Patricia!”

You could tell she once had been a nun and a teacher. Tall and stern, with no-nonsense short gray hair, Patricia would quiz you about buttons pushed, updates installed and reboots attempted. Then she’d laugh and cheerily fix whatever was wrong before rushing off to answer the next cry for help. A whole lot of people called Patricia, who was no stranger to 60- and 70-hour workweeks.

Patricia makes no claims of blazing trails. But when she entered a doctoral program in computer science at the University of Missouri – Rolla in the mid-1970s, she was one of only three women in the program. When she started work in Notre Dame’s Office of Information Technology in 1992, however, women were no longer such a rarity in the field.

But those women weren’t Patricia, whose independent streak and penchant for working long hours eventually made the sisterhood an unlikely fit — “I was not living religious life the way it was intended,” she says — and whose knowledge of computers made her a geek before being a geek was fashionable.

To the one-time math major, there is nothing magical about computers, nothing she can’t stare down and take care of. They are simply tools, tools that, for instance, took the grunt work out of the hours and hours of simple computations once required for numerical analysis.

Now the 69-year-old also has another set of tools, tools that make it possible for her to live her current life. That would include an electric wheelchair, a specially equipped van, a hoist at the Rockne pool to get her into the water and her ever-present Blackberry.

In her let’s-get-this-fixed-and-move-on voice she practically dismisses her life-changing accident, a January 2008 event she doesn’t even remember. “It never struck me as something like ‘woe is me — this is the end of my life,’” she says.

It almost was. Heading back to campus after attending a ND women’s basketball game in West Virginia, Patricia pulled to the shoulder of an icy I-69 near Fort Wayne, where an accident had just occurred. As she stood between her car and a guardrail, another car trying to avoid the previous accident struck her car. Police reported that Patricia’s car then hit her, throwing her over the guardrail.

And one last thing. “It was more than two weeks after the accident when I finally realized that I had no legs.”

Her response to the trauma her body underwent is one of gratitude for the outpouring of support from the Notre Dame community — and for what a team of doctors did not do. “They almost amputated my left arm,” she says. Instead, they put the crushed limb together with “metal plates, wires and screws,” which means she can use the hand controls to drive her van and can lift herself from the driver’s seat to her wheelchair.

Still, “It takes me so much longer to do what other people might consider simple things,” she says.

So while Patricia no longer stands tall, don’t think for a minute that she can’t stare down a problem, computer or otherwise.

One she loves to tackle is her service as volunteer coordinator for the Notre Dame women’s basketball team, often putting in seven hours on game days alone.

“My interest in basketball came out of teaching at Immaculata,” where she also earned her bachelor’s degree, she says. That school’s women’s team won the national championship in 1972, ’73 and ’74.

Patricia would like for the Notre Dame women to do as well. And if not the national championship, she’d at least like for the team to beat UConn on a regular basis.