Tom Suddes ’71 died September 26 at age 67. It’s hard to believe. Tom Suddes was a life force not easily extinguished — even with his two-year battle against amyotrophic lateral sclerosis, ALS, Lou Gehrig’s disease. There’s no way his life story ends there, though.

For one thing, there is the legacy. His lasting impact on generations of Notre Dame students — as a volunteer. Living on in the lives he changed. Hard to imagine anyone else making such tremendous personal contributions to the place as an unpaid volunteer. Few have made such a difference as full-time employees. 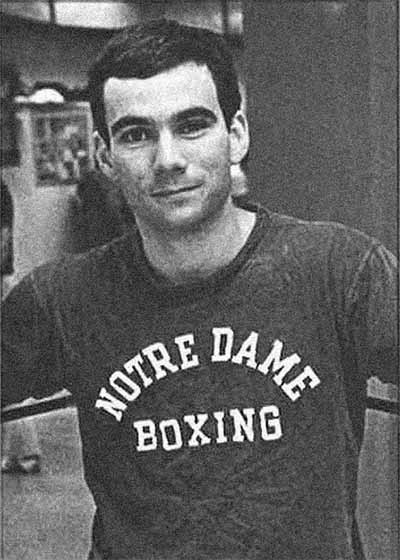 Then, too, there was the October 22 celebration of Suddes the father, coach, husband, boxer, entrepreneur, fundraiser, fun-giver, farm-maker and playful, grinning, indefatigable fountain of enthusiasm, joy, drive and humor held at Eagle Creek, the 50-acre farm-residence he and his high-school-sweetheart wife, Trudy, and their five kids tamed rock-by-stump out of the Ohio countryside near Columbus.

Two hundred people attended the Mass of Celebration that Saturday at Saint Brigid of Kildare Church in Dublin, Ohio, and 250 made it to Eagle Creek for the reception. There were outdoor events for the kids, a hayride and evening bonfire. The afternoon buffet reflected Suddes’ fondness for breakfast, with bacon, eggs, French toast, mounds of cereal and his favorite vegetable, candy corn.

Dozens of Bengal Bouts boxers were there, and all his roommates and their spouses from Notre Dame’s long-departed Holy Cross Hall. Suddes, the oldest of five siblings growing up in central Illinois, had been president of Holy Cross Hall and chairman of the Hall Presidents Council. He boxed in Bengal Bouts all four years, was champion twice and served as club president.

Memories, stories, laughter and tears were triggered by talks and tributes and hundreds of photos and notes, a lifetime’s worth of memorabilia and a “boxing corner” with Notre Dame trunks, robes, gloves and awards. And there was the boxer’s final 10-bell farewell salute.

Suddes spent two years in the U.S. Army after graduation, then returned to Notre Dame in 1973, heading an ambitious and goal-surpassing fundraising campaign as director of development — the first step in a business career that was part adventure, distinctively high energy and immeasurably successful — because it was always more about helping people than generating income for himself.

When Suddes left Notre Dame in 1978, he started Shannon Realty, a residential and commercial real estate venture in South Bend. Five years later he launched the Suddes Group, moved to Ohio, and over the next 30 years that enterprise raised more than $2 billion for and with organizations throughout the world, managed more than 500 successful fundraising campaigns, assisted more than 5,000 organizations and supported about 30,000 entrepreneurs and enterprises across the globe.

Much of his motivation and satisfaction was derived from inspiring others, giving them the tools for their own successes. He wrote books, gave talks (often standing on chairs, tables, podiums) and brought corporate executives to his place for obstacle courses, rope challenges and other physical activities that tested their limits. He scribbled letters and notes, lavishly dispersing adages and axioms. “Live, love, learn, laugh, leave a legacy,” was a favorite. So was, “Wealth is an abundance of things you value.” By all accounts Suddes valued nothing more than family.

Suddes had a contagious joie de vivre. He delighted his children and grandchildren with tractor and motorcycle rides. Together they collected crawfish from creeks and chicken eggs from the henhouse; they zip-lined, hiked and rock-climbed. In Colorado’s Garden of the Gods Suddes once drew a crowd of onlookers wondering how he’d ever get down from the aerie he’d gotten himself into. To many he was known as Coach or O.G. — for Old Guy, although he never lost his boyish ways. In 1997, Suddes won an around-the-world trip from Success Magazine to share his experience with microentrepreneurs in developing countries. In 2012, he was a Masters Ringside world champion boxer. When Pat Dillon ’04, captain of the 2003-04 Bengal Bouts, said, “Coach Suddes was one of the craziest guys I ever met,” it was totally a compliment.

For more than 40 years Suddes took a six-week “sabbatical” to coach the annual boxing fest. He directed the workouts, pushups, sparring and boxing matches, refereeing more than 3,000 bouts and passing along to each student fighter a satchel of life-changing values. No one took the Bengal Bouts motto, “Strong bodies fight, that weak bodies may be nourished,” more seriously than Suddes. During his tenure the bouts raised more than $1 million for the Holy Cross missions in Bangladesh. In 1997 Suddes helped establish the Baraka Bouts through which hundreds of Notre Dame women have trained and competed, raising funds for the Holy Cross missions in East Africa ($120,000 in 2015 alone). In 2014 he was given an honorary monogram from Notre Dame’s Monogram Club.

Tom Suddes was my first boss at Notre Dame. I was a development writer for that campaign he directed, and in all my 64 years I have never met anyone else like him. He was packed full of life and giving and irrepressibly high spirits. It’s hard to believe he died. But he’s not gone. No way.

Kerry Temple is editor of this magazine. Email him at ktemple@nd.edu.